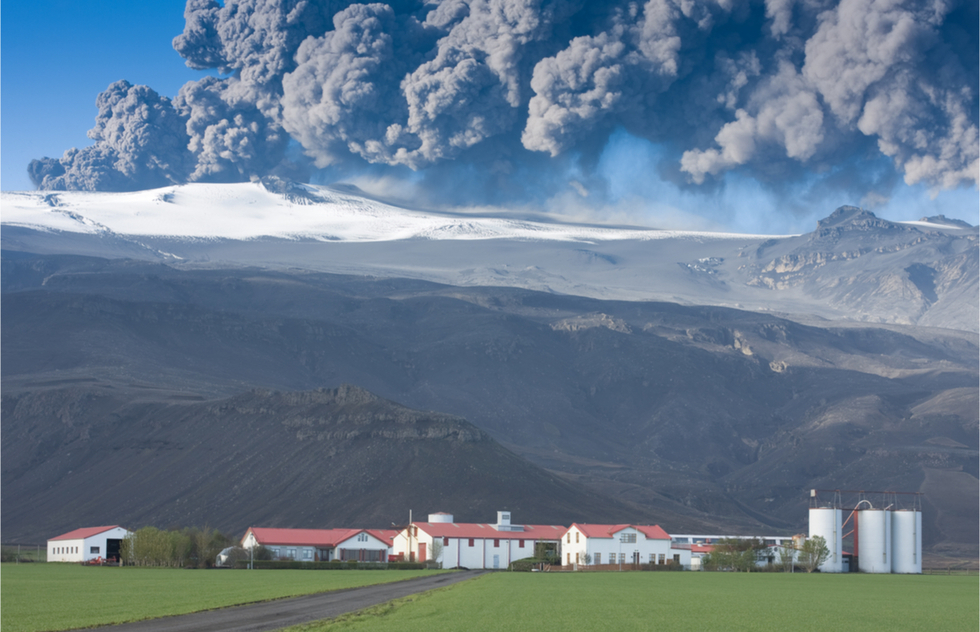 Oh, Great. Now That Icelandic Volcano Looks Like It Could Erupt Again

If you're old enough, you might remember that time in 2010 when a volcano shut down Europe.

In March of that year, Iceland's Eyjafjallajökull volcano (pictured above) erupted and spewed so much ash that planes couldn't safely fly. As the plume drifted southeast and spread, the continent's aircraft were effectively shut down for a week until the microscopic flecks of ash gradually dispersed. More than 100,000 flights were grounded, as much as €2.5 billion was lost, and the summer travel season was tossed into uncertainty as the world waited for Mother Nature to simmer down.

It's hard to believe that was a just decade ago. But considering the avalanche of bad news we've had this year, that seismic event feels like a distant oddity. It almost feels like the good old days.

Well, steel yourselves. A different Icelandic volcano, Grímsvötn, is showing signs that another eruption is imminent.

Because of geologic quirks, Grímsvötn, which is located in the country's Vatnajökull National Park, doesn't have to erupt very often to cause mayhem. The volcano is capped by ice and a deep lake of meltwater. Those conditions have a way of increasing pressure, shaping ash particles, and sending them soaring.

Vulcanologists have observed the subglacial volcano inflating and grumbling. Paired with the site's typical timetable of activity, that has researchers convinced Grímsvötn is preparing to erupt again. They're so certain that they've raised the aviation threat level for the surrounding skies.

But take heart. It might be too soon to add Grímsvötn to the list of 2020's indignities. After all, the volcano erupted in 2011, too—the year after Eyjafjallajökull paralyzed Europe.

And even though Grímsvötn was the larger of the two Icelandic eruptions, its ash plume didn't wind up causing nearly as much trouble as the 2010 event.

Only about 900 flights were canceled after Grímsvötn's 2011 activity. The volcano's eruptive history indicates that the coming event, should it occur, might not even be as intense as the 2011 showing.

With a volcano this unique, though, it's hard to know for sure until you see the qualities of the ash produced and what the air currents do with it.

The airline system can't handle much more stress in 2020. A shutdown of flights across the Atlantic would throttle commerce just when it has started showing signs of life again.

On the other hand, we could also argue that if nature is intent on throwing one of its regular hissy fits, it might as well take this moment, when travel is at a low ebb anyway.

Keep an eye on the skies above Iceland. Time will tell if 2020's volcano activity blows, too.