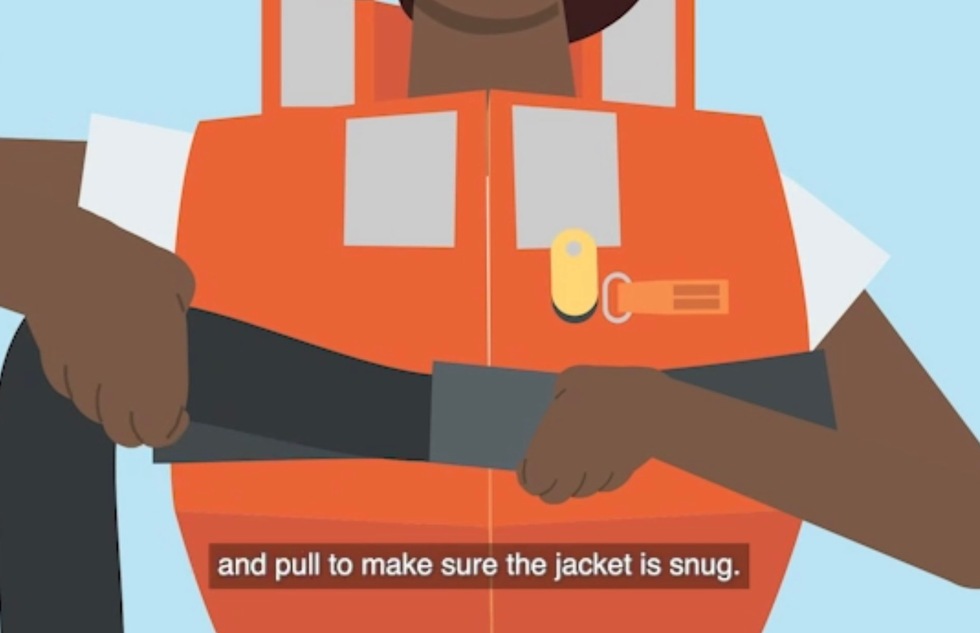 On Cruises, the Hated Muster Drill Is Dying Out. We Love What's Replacing It

The most hated fixture of cruising—the mandatory in-person safety presentation before departure—is becoming a nuisance of the past.

Everyone who has cruised in the United States knows the drill, which is required by law: Just when you've excitedly boarded the ship, settled into your cabin, and found the ideal cocktail bar for a pre-vacation toast, the service windows slam shut and all on board, crew and guests alike, are forced to crowd into a big common space, such as the main dining room, to endure a safety briefing. Most passengers barely pay attention.

Vacationers hate it. They want to get their fun on, not relive the misery of grammar school assemblies.

The crew hates it. They have to drop what they're doing and then reclean all the muster stations where groups just gathered.

And in Covid Times, clustering hundreds of people in the same room is a lousy safety choice.

Well, cruisers might never have to do the mass muster drill again. The major lines are rolling out digital workarounds that allow passengers to get safety training on their own time.

Royal Caribbean, Celebrity, Norwegian, MSC, and Carnival are embracing methods that teach the pertinent info elsewhere, such as via passengers' own smartphones, and then require guests to check in individually at their assigned emergency meeting point to prove they know where it is.

Jay Schneider, Royal Caribbean's Chief Product Innovation Officer, says development of his line's Muster 2.0 initiative (also used by Celebrity) dates to before the pandemic, but by a happy coincidence, the new system is rolling out at a moment when it can also mitigate a host of social distancing and sanitation concerns.

The cruise lines all worked with the U.S. Coast Guard to make sure customers are still being taught the critical information, such as how to put on a life jacket and what the ship's emergency horn pattern sounds like. The new systems simply enable passengers to learn that info without the forced marches and tedious in-person lectures.

We tried Royal Caribbean's version of virtual muster in November 2021 aboard the new Odyssey of the Seas. Now that so much of the company's advance check-in process is handled through the official app, the dreaded muster cluster is gone. 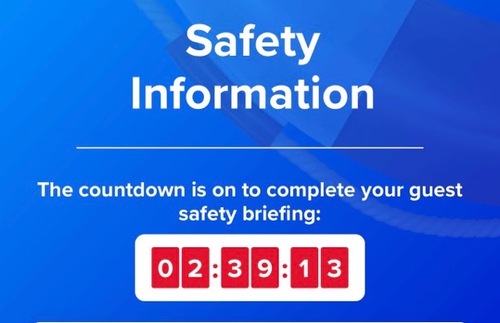 In the hours before departure, a countdown clock appears on the main page of Royal Caribbean's app, alerting passengers of the deadline for completing the components of safety training.

All the tasks were quick. One of them was to watch a short video about how to put on a life vest (pictured at the top of this post). Another was to listen to the sound of the ship's distress horn. Once both pieces of media were played, the app marked them as completed. Guests can also watch and listen to these items on their stateroom TVs. 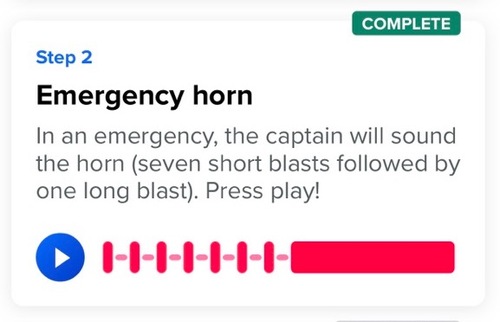 The final, most important part of the independent muster system comes when passengers prove they know where their emergency assembly point is. For that, they are required to go in person and check in with a crew member anytime in the hours before departure. 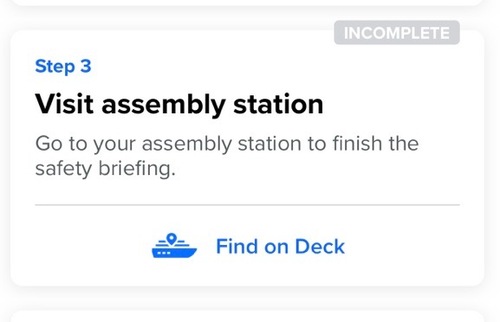 Instead of corralling passengers at their muster stations for a half hour or more, the new independent interaction takes less than a minute, yet the same information has been conveyed.

Because the final check-in happens on passengers' own time and they have hours to accomplish it, there is no stampede to battle, no social distancing to worry about, and the bars and shops on the ships don't have to close.

Each cruise line executes the new muster concept a little differently. While Royal Caribbean and Celebrity have offloaded most of the training to media that plays on a smartphone app, Carnival and MSC show passengers videos in their staterooms only. But the final step, in which guests demonstrate they can find their muster station by making a quick personal appearance, remains the same.

There's a side benefit to moving the safety demo to smartphones: Anytime guests want to brush up on procedures, they can just pull up the app. With the old-fashioned group safety drill, you only had one chance to retain the information.

And there's no chance passengers can sneak out of the training by lingering at the bar. On Carnival's ships, after a newly boarded guest has purchased two drinks, the ship's system freezes the ability to make additional purchases until muster training has been completed via the company's HUB app.

Compare that compliance measure to the tragically lax enforcement of emergency education on the infamous Costa Concordia, which set sail in 2012 with some 600 passengers who had yet to receive a whit of safety instructions. That disaster took 32 lives, but now that the activation of a passenger's room key card is tied to completion of the muster tasks, the educational loophole has been closed.

In fact, the new systems are creating a new boarding ritual for cruisers. They used to head straight from the gangway to the buffet—but now, it pays to get the safety training out of the way first.

As one longtime Carnival cruise director wrote on his Facebook page, "If it were me, I would get on the ship and go straight to the muster station. That way it's done and you can then go get lunch and yep, a Fun Ship Special."