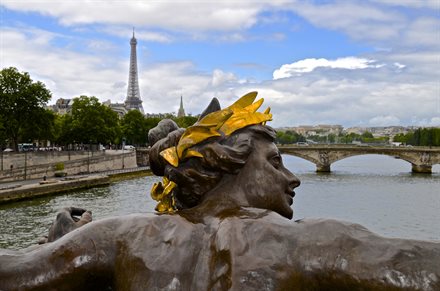 It’s that time of year and let’s be real, those three inches padding my waistline aren’t coming off anytime soon. Instead of doing the usual “lose 10 pounds” resolution, my top 7 promises to myself are going to revolve around travel.

1. To travel somewhere at the last minute. As a working parent, too much of my life is scheduled long in advance. This year, I hope to scoop up the kids, book a last-minute deal (Twitter take me away!) and just head out. There’s nothing like serendipitous travel to shake the dust out from between your eyes.

2. To read more books on history, art history and current political science. That way, when I head to the destinations discussed in those tomes, I won’t be an ignoramus. I’ll have my own thoughts on what I’m seeing and will find the experience of visiting far richer.

3. To travel somewhere new. Too often, my trips take me where my business is or family resides—yes, that’s the case even for a professional travel writer. So I’m going to make sure to schedule some journeys that are totally off my beaten path in the coming year.

4. To travel to new places near the old places. And when I do have to go to the destinations I know well, I’ll take the time to go to nearby places that will be new to me. There are few more mind-expanding adventures than putting oneself in an utterly unfamiliar context.

5. To remember my darn toothbrush. Though I’m on the road for a good quarter of the year, I always seem to forget to pack something, and it’s usually my toothbrush. It’s likely because I use it on the morning of travel. Time to get a dedicated toothbrush just for travel. Hey, now that’s a resolution I’ll definitely have no trouble keeping!

6. To stop playing footsie with the travel industry. I’ve given up on “loyalty”. The minimum number of “points” and “miles” needed for redemption has gotten too high, in many cases, and the way one gets these “chits” has also gotten more difficult. From now on, I’ll be purchasing the best value flights and rooms and won’t be adding more gray hairs by worrying about the “loyalty” ramifications. Life is too short.

7. To travel without fear. Hotel bookings are down 40% in Paris this December compared with last. And analysts told Reuters that France could lose €1billion in tourism revenue in the coming year. As a lifelong New Yorker, I know what it likes to live in a city that people are scared to visit. We were deserted by the world for a good two years following the 9/11 attacks and it hurt my hometown’s economy considerably. I won’t do the same thing to destinations that suffer an attack. Instead, I’ll support them by heading to them and urging others to do so. I know, from my own experience as a New Yorker, that those cities will be safer after an attack; and the people will be grateful to and even more welcoming of visitors. I also know that an attack can happen anywhere at any time and I refuse to live my life in fear. The terrorists will not clip my wings.

(…. And I’ll shed the weight in February….probably.)