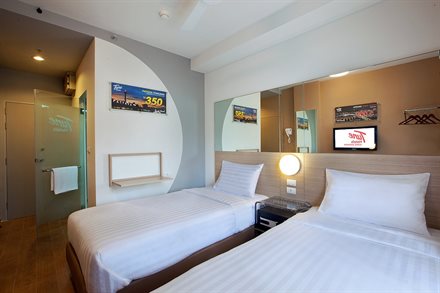 A few years ago in Europe, a new breed of budget hotel began to emerge, epitomized by Lindemann's hotels in Berlin. Although it was a generally affordable property, it was also what is often called a "design hotel," meaning its decor and style were crafted by architects and designers to capitalize on a younger, trendier clientele than at the conservative corporate hotels.

Black-and-white style aside, what set Lindemann's apart was how it billed customers. Before they checked in, they would decide on and pay for the extras they wanted. If you want breakfast, you could pre-book for a set price each day (or, in Teutonic style, you could opt for a packet of vitamins instead). If you wanted a bouquet of flowers upon arrival to surprise your partner, that'd be €25. There is even a radio button to use for selecting what you want for a complimentary welcome beverage: German beer, wine, soft drink, or coffee. And if you need Wi-Fi, you purchase that ahead, too, and upon check-in, you're handed a chit with your code.

At least outside American borders, motels are officially passé. Pre-arranging everything you want helps hotels operate better and less expensively. First, it supplies the income of added fees. Second, it manages guest expectations from the very start. Third, and most importantly, it reduces the amount of staff that's necessary, often making it possible to hire only a small desk staff and daily housekeeping team.

A la carte hotels have been bubbling up for a while. One of the first was easyHotel. It was an offshoot of low-cost easyJet, which makes sense, given its business model of limited service. EasyHotel markets itself as the cheapest of the cheap, and indeed, one of its optional extra fees at its 20 properties is for a room that has a window—something that, because of fire codes, would not be possible in most American cities.

Want a towel? Want housekeeping services? Want to use the TV?  Each one costs a few dollars, and each one is preferably booked ahead of time. Once you arrive, the staff hands over what you requested and stays out of your hair. It's a "pay-as-you-use" model, and if you don't want to use certain amenities, you don't pay for them. In exchange, starting rates for the room are as low as $50 a night.

The Asian analog of easyHotel is Tune Hotels, the hospitality offshoot of a successful Malaysian low-cost airline, AirAsia. Tune, too charges more for windows, although its style of room is generally more comfortable than at easyHotel, with cushy beds and power showers as part of the standard rate. Tune has 38 open properties and is growing by leaps and bounds; its concept of providing a cheap-but-stylish place to crash has already opened all over India, Asia, Australia, the Philippines, and there are a few new properties that recently expanded into Europe via the United Kingdom.

And the new names keep coming. Z Hotels was started in 2011 by hotel professionals who started in the business-hotel sphere and is now one of the most in-demand budget names in London. The Dutch chain CitizenM, soon to be 10 strong, takes the limited-servce offering to a stylish extreme, and the lobbies of its properties are legitimate hangouts for locals wherever it pops up. It has more standard inclusions than Tune or easyHotel, but the idea of a barely seen staff remains central. Check-in is via a kiosk, keeping front desk staff at a minimum, and bathrooms are essentially unit cubicles installed in one end of the rooms.

CitizenM is on the cusp of rolling out to the United States through two new hotels in New York City, which hosts many international visitors already familiar with the concept.

In the United States, the affordable hotel chains lean toward simply including more in their standard room rate, which puts the pressure on the marketing and sales departments to educate consumers about what's included in the price. But if a guest doesn't want a service, they can't subtract it from the rate. Perhaps because the upper-level business hotels have taken advantage of guests through stealthy fees, breaking out extras from the very start may be viewed with customer suspicion. On the other hand, the savings may be worth it.

As Americans grow increasingly weary of being henpecked by extra fees in every area of their consumer lives, will they respond to the idea of a pay-as-you-use hotel? It all depends if they think the savings are worth the hard choices.