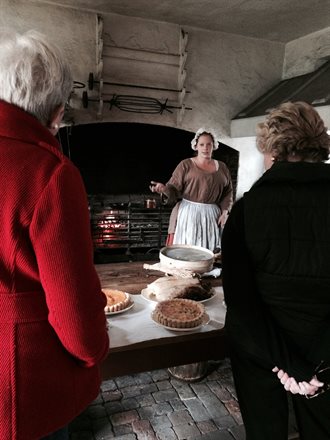 I won’t lie: I was dragged, kicking and wailing, to Colonial Williamsburg. I thought the idea of spending Thanksgiving at the famed “living history museum” was a goofy one, and the rolling of my teenage daughter’s eyes when the plan, created by my father, was announced only confirmed that this was going to be a familial disaster. I expected a weekend of candle making and rock candy sucking, surrounded by chirpy men and women in powdered wigs.

Turns out I was the village idiot. My preconceptions couldn’t have been more wrong…or more common. Though this hybrid attraction—it combines actual historic buildings from the 17th and 18th centuries with re-built structures and re-enactors who play famous characters from Colonial America (as well as tradesmen and slaves)—was quite popular from its inception in the late 1920’s through the late 1980’s, today it gets about a third fewer visitors it got two decades ago. Those visitors, from what I could see, tend to skew older. I saw only a few other families and no couples in their 30’s or 40’s.

Which is a shame because the museum does a masterful job not only of time travel, but of showing how North America’s colonial past shaped and continues to shape our present day lives. Sometimes the revelations are small ones: we call a dollar a “buck” today because, unknowingly, we’re referencing the once-important deer trade and the value of a pelt. The end of a meal is called “dessert” because our ancestors believed in having a “palate cleanser” before “deserting” the table.  And every time we laughingly refer to someone as a “big wig” we do so because Colonial politicians wore the curliest, fluffiest wigs around.

I learned all this at the many shops that line the main street of Colonial Williamsburg, manned by erudite actors who explained not only how silver was once smelted, wigs built and hats shaped, but what these common items tell us about the history of trade. In the milliners store, the “apprentice tailor” made the fascinating point that the North American colonies were maintained for fashion’s sake: their most important exports were beaver pelts (used in the hats of the day) and tobacco (certainly not a necessary staple). Not so different from today, eh?

Along with the shops, famous characters from United States history (George Washington, Thomas Jefferson, Patrick Henry) hold fascinating Q & A sessions, and give speeches that touch upon subjects, like the role of religion in public life and the right to privacy, that are still being debated today. Soldiers march alongside fife and drum corps. And mock trials are held to determine whether colonists singing bawdy tunes about King George are guilty of sedition. For the kids, there are old fashioned games to master (like hoop and stick), lots of music and the chance to dress up (colonial costumes are available for rent).

Not all was perfect at Colonial Williamsburg, of course. The food was uniformly mediocre at every tavern and inn we tried, and the plumbing and mattress at the Williamstown Lodge can only be described as “historically accurate” (read: very loud and rock hard). But all in all, a visit here is at one and the same time quite entertaining and wonderfully illuminating. Heck, by the end of the visit my teenage daughter was asking when we could return. If that’s not the sign of a successful family vacation, I don’t know what is.