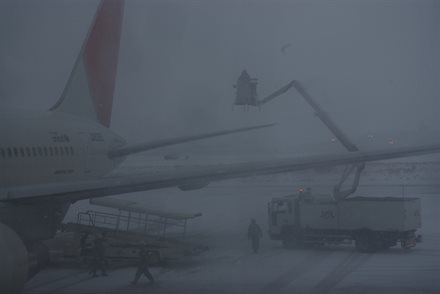 It's very cold in America right now. The average temperature in the Lower 48 is lower than 48—it's just north of 23 degrees.

As weather reports of the Polar Vortex came out, many airlines announced contingency plans. Many of them cancelled flights to make sure their equipment ended up where it needed to be to resume normal operations later in the week.

But only one of them, JetBlue, pointed to protection laws that were put in place by the FAA a little over two years ago.

Poor weather fell on the Northeast just after New Year's, and the airline said it hadn't had enough time to reset all its aircraft and start its crew clocks over again.

"Even as airports began to reopen," it wrote on its blog, "newly launched FAA regulations on pilot duty times caused delayed flights to quickly turn into cancelled ones. Now today, less than a week into the year, we're watching a polar vortex wreak havoc on flight schedules across the industry, as rainy wather prepares to turn airports in the Northeast into ice rinks once again."

Customers are enraged. One of them, in an interview broadcast on NBC Nightly News, declared that "never again" would he fly this airline.

There are a few things to take away from what is happening today.

One is a little bit of thanks. You can call an airline blog nothing but PR spin, but I for one wish that all airlines were as forthcoming about their operational reasons for irritating me. Usually I get only blank stares, road blocks, and hold music.

But second thing to take away is — well, a little more thanks.

An overworked crew is a proven cause of plane crashes. And in February of 2009, a Colgan Air commuter jet crashed outside Buffalo, NY, killing 50. It was subsequently discovered that the pilots had boarded the aircraft with essentially no sleep. The government acted (remember when our government acted?), instituting rules about how often crews must be permitted to rest, and for how many consecutive hours. (Read the Federal Aviation Administration's press release from December 11 about the new rules by clicking here.)

As I write this, thanks to winter weather some 18,000 flights have been cancelled in the United States since last Thursday. On Monday, there were 4,400 cancelled, and some 300 of them were JetBlue's, which says it will restart operations Tuesday afternoon, after its employees get some government-mandated shut-eye.

Yes, flight cancellations stink. Yes, they're enormously problematic for a lot of people.

But crew protections are something we should all value about our system.

They are the result of a prudent policy that only has our safety in mind—not just for travelers, but also for the humane working conditions of the people who help us travel.

Don't get me wrong: Our air travel system is a mess. It only seems to function under perfect circumstances. When things go wrong, it tends to have a breakdown that reverberates for days. And much of the time, the people who are stranded feel stonewalled.

As a nation, the United States puts too many eggs in the air travel basket, and all too often, the eggs get spilled. It's glaringly obvious that we demand additional options.

If you would like to decrease the inconvenience caused by the intersection of weather and unsafe working conditions, then you might want to read this recent blog post by Arthur Frommer, who suggests a time-tested workaround for grounded air travel: properly funded rail travel. If the government invested in rail travel even a fraction of what it spends of our taxes in air and road travel, we'd have a high-speed rail system that would be the envy of the world (remember when we were the envy of the world?).

In the meantime, if you're locked into using the air system this week, contact your airline—or better yet, look for written advisories on its website, since phone lines are probably jammed.