Portrait of a Family Volunteer Vacation in Chennai, India

When Vani (not her real name) was five years old, her mother dropped her off to live at the SEAM Children’s Home in Chennai, India. Vani’s mother had remarried, and her new husband didn’t like the little girl. He had beaten her severely a few times. SEAM, a home for orphaned and semi-orphaned children, offered safety and the promise that the child would be educated.

Vani barely spoke when she arrived at SEAM, and when she did, what she said often didn’t make sense. She hid from other people, especially from the western volunteers who visited the home near nightly to tutor the children in English.  Until one day, one of the “ghosts” (as she called them) brought balloons for all 23 children. Enchanted by the sight, she came out of hiding, and by the end of the day she was starting to play with the other kids, and returning constantly to the “balloon woman”.

I met Vani last month as a volunteer myself with Global Volunteers (www.globalvolunteers.org), the 31-year-old volunteer vacation organization that supports SEAM, along with other institutions in Chennai, and around the world. Vani is just one of the thousands of children that Global Volunteers has worked with over the years;  GV’s mission is “to create, nurture and sustain the wellbeing of the world's children so they can realize the full promise of their human potential”.  And they do this in a impressively sensitive way, only going where their help is requested. Volunteers are considered “servant learners” and take part in long-term initiatives that the “host partners” in-country have deemed valuable. 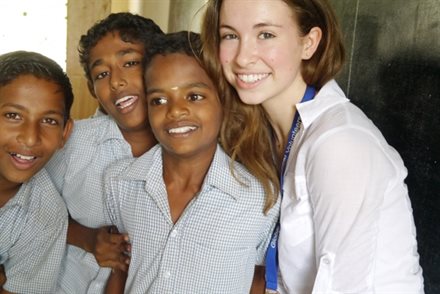 In India, that means teaching English, the official language in a country with many mother tongues (the language varies from state to state; in Chennai most speak Tamil). During the day, my 16-year-old daughter and I taught at sixth, seventh, eighth and ninth graders at a local school while my husband and twelve-year-old daughter worked at a pre-school teaching more basic English skills. In the evenings, we all tutored kids one-on-one at SEAM.

We soon came to understand that we were doing crucial work. Knowing English can make the difference between finding a well-paying job and having to make do as an unskilled day laborer in India.  The problem is, English education is minimal in most public schools; and is often poorly taught even in the less-expensive private schools that claim to teach all of their courses in English.  Just practicing conversation with a native English-speaker improves skills—or so our onsite Global Volunteers staffer Stephen Raja told us. We were the 154th Global Volunteers team to come to Chennai since 2001, and the organization’s records show that the work done by volunteers, most of whom are not trained teachers, has resulted in higher English test scores for GV’s kids than for their peers. (And as a quick side note: Global Volunteers gives its participants a thick manual on how to construct lesson plans and use exercises and games to facilitate English comprehension and conversation).

But back to Vani who is, today, a bright-eyed seven-year-old with a ready giggle. If I hadn’t been told her story, I never would have guessed at the tragedy in her background. When my family and I arrived as volunteers at SEAM, she eagerly ran up to take my 12-year-old daughter’s hand and show her the facility. Later in the evening, and in subsequent evenings, she sat with my both my daughters to practice her English, slowly reading through a picture dictionary and grinning with delight every time she was praised for her correct pronunciation. Both she and my daughters blossomed in their respective roles as teacher and model student; by the end of our stay, Vani had added more than a dozen words to her vocabulary, and my daughters had learned a lesson about the critical importance of education.

We’re back from India now, but Vani and her peers still fill our dinner conversations. We’re hoping to do another family volunteer vacation soon. And though it’s clichéd to say, I have no doubt that we received far more than we gave from the children we met on what was a mind- and heart-expanding sojourn abroad.

If You Decide to Volunteer with Global Volunteers

Since the volunteers work with children, all are expected to provide two-to-three character references before being accepted into the program. Prices vary by destination, with the Chennai project costing $1800 per person for two weeks, which covers room, board, transportation within Chennai and training for the participants. The fee also helps supply daily fresh fruit and vegetables year round for the children at SEAM and covers many other costs in India for the children involved in the programs Global Volunteers supports.