Posts from the Australian Outback: Day 2 in the Northern Territory Means Camels in the Bush 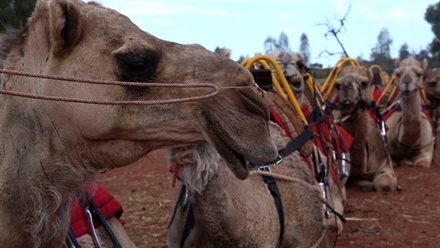 One of my goals in visiting the Uluru area was to explore this eye-poppingly beautiful area in as many ways as possible. But I couldn't, in my wildest imagination, have guessed that that would include seeing the landscape (and the sun set on Uluru) from the back of a camel.

After all, camels aren't supposed to BE in Australia. They aren't native to the land, and last I heard, they can't swim oceans.

But in taking my "joy ride" 10-feet or so above the ground, I not only got a uniqe view of the landscape, I learned a little bit about Down Under history and the ramifications today for decisions that were made over a century and a half ago.

In the 1840's and then in the 1860's, camels were imported to Australia to replace the poor horses who were dropping dead from heat exhaustion in the country's steamy core. Used as pack animals, they were essential to the men who explored the heart of Australia, who built the railroads and who did wacky things like bring pianos to the remote outpost of Alice Springs (yes, that's right: a piano was carried in by the 70-camel teams that brought a lot of goods into the Outback. These camel convoys could carry 60 to 70 tons on their backs and go about 20 miles per day).

Cut forward to the introduction of the car into Australia in the 1920's. Suddenly, this once vital species was no longer needed. And within years, thousands of camels had been set free to become the Australian equivalent of deer, eating up plants, wandering onto the roads and doing other sorts of mischief. Apparently, there were about 1 million wild camels in Australia about 5 years ago. Those have now been culled, according to the folks I spoke with, to about 600,000. But the camel population doubles every five years.

One of the most responsible uses of camel are the tours that go on outside Uluru-Kata Tjutu National Park, but have a view of "The Rock" nonetheless. They're run by Uluru Camel Tours, they end with a wine and snacks reception, and they're darn educational. Here's what I learned about camels (beyond the history above):

-Camels have two eyelids. One goes up and down and the other sweeps side-to-side like a windshield wiper.So if the camel gets dirt in its eye, they can sweep it towards their center tear duct where it's then flushed out.

-A camel's lip is divided into three segments, and the camels can use those bits almost like we use fingers. In fact, one of the most talented camels at the farm got adept at picking the lock to the camel pen, so they had to change the type of lock.

-Because camels have no predators in Australia (not even microbial ones), they're considered the most "pure" species on the planet, and are being exported to countries around the Middle East, both to breed with camels there and to be used as meat and leather.

-All of the camels we were riding were once wild, since it's illegal to breed camels (because of the overpopulation) in Australia. That being said, if you're able to catch a wild camel (or a wild horse) in the Outback, you have the right, under law, to keep it.

Pretty fascinating, eh? And though it wasn't an afterthought at the time, it was darn fun to be riding through the Outback on a very sweet camel named Marlene (she liked to be patted), hearing these facts (and others) from our shaggy-looking but surprisingly erudite guide.