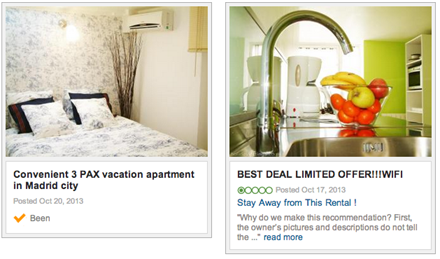 Frommer's reader Dave Wyner ran into a troubling problem on the website TripAdvisor.com: A place he stayed had posted two listings to double its exposure.

Wyner told us: "Several months ago, in anticipation of a trip to Spain, I began looking for vacation rentals - using TripAdvisor. I found an ad for an apartment in Madrid—it had a couple of "very good" reviews.  We rented the place. It was turned out to be other than represented and shown. It was a disaster. The owner used carefully crafted photos and descriptions which were, at best, less than accurate — at worst  misleading.  After returning back to the US, I wrote a review which accurately and honestly warned other travelers to stay away from this rental. This was published by TripAdvisor.

"So what is issue? What is the problem? Simply, this. In writing my review, I found that the owner had placed a second ad for the same apartment under the different title. I am sure you get it at this point. To avoid the effect of bad reviews and to double her exposure or opportunity to rent, this owner was and is using essentially duplicate listings.  Looking at TripAdvisor's policy, I saw what a I thought was prohibition against owners listing the same property twice.
"It is very difficult to communicate with TripAdvisor by phone—even though one is listed.  So I faxed a letter to TripAdvisor HQ describing the problem. No answer. Next, I wrote another review and submitted it for the duplicate listing. "
In other words, to make sure no one would miss his warning about the place because they happened to only see the duplicate listing, Wyner posted a review in both places.
TripAdvisor deleted the second review. "TripAdvisor takes review authenticity very seriously...", its form letter to Wyner said, and because Wyner's paperwork matched only one of the listings, the one he'd originally found and booked through, his other warning was struck from the record.
Yet TripAdvisor kept the duplicate property listing. For the deleted one, Wyner was merely marked in his profile as having "been" to the property (see the image, above), a meaningless designation since it meant the duplicate listing was retained, unchallenged.
There are still multiple listings for the same vacation rental (here's one, and here's the other—Wyner, who has stayed there, confirms that although the information is arranged differently, both are the same place), except Wyner's negative review doesn't appear on both of them.
Wyner wrote: "In my view, and one I think you may share, considering TripAdvisor's lofty pronouncements as to the service it provides, it is a serious disservice to its travelers to allow owners to escape bad reviews on a property by simply listing that same property under a different title which is free of adverse reviews. "
I contacted TripAdvisor to ask about the incident and why a duplicate listing was permitted to persist and collect bookings revenue, but it did not reply.