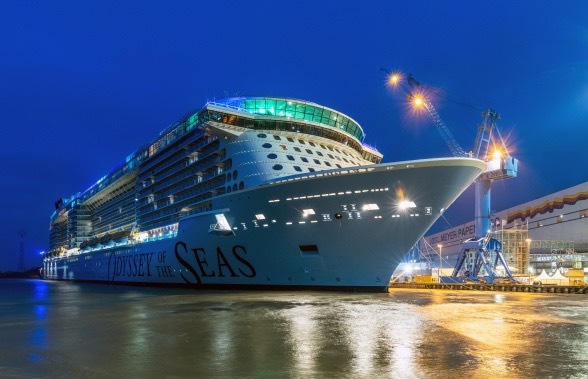 Royal Caribbean's New Ship Set to Debut, but Only for Vaccinated Travelers

When Royal Caribbean launches its newest megaship, Odyssey of the Seas, only vaccinated passengers will be aboard.

The cruise line has announced that tickets for the ship's upcoming debut this summer will go on sale March 9—and that everyone on the crew and the passenger list must have proof of vaccination against Covid-19 to participate.

To make sure that it can clear that high bar, Royal Caribbean has elected to unveil the new ship in Israel, a country that has, so far, been able to vaccinate around 50% of the population.

Israel, which has a national health care system, reports that despite some inequities in distribution, 90% of citizens over age 50 have now received the Covid-19 vaccine.

In Royal Caribbean's announcement, CEO Michael Bayley said that "sailing from Israel is an opportunity we have had our sights on for quite some time."

But the Mediterranean Sea around Israel was not the company's first choice.

Before the pandemic, Odyssey of the Seas was slated to spend its inaugural season in Rome before moving on to Fort Lauderdale for Caribbean runs.

Now the ship's first season will be out of Haifa, in Israel's northern region, where the vessel will undertake "a combination of 3- to 7-night escapes visiting the Greek Isles and Cyprus," according to Royal Caribbean.

The relatively small size of the Israeli market is a constraint, but there are other potential issues with the shift. Some of the villages located near the announced ports of call, including on Santorini and Mykonos in the Greek Islands, are simply too cozy to handle comfortably a vessel of Odyssey's gargantuan size: 1,141 feet long and containing 4,905 passengers at maximum capacity (although the ship is unlikely to be full at first).

There's also the fact that those waters, including the port in Athens that the Odyssey will use, are still dealing with the ongoing refugee crisis out of Syria.

But the problematic aspects of the new itinerary choice must share headline space with what the shift means for the cruise industry as a whole. Although some smaller cruise companies such as Saga have announced their intentions to require vaccinations of all future passengers, most major cruise lines have withheld similar announcements until now.

That hesitance is over. Royal Caribbean will officially insist on vaccinated guests. Travelers who wish to cruise in the future will almost certainly require proof of vaccination.

Something else potentially telling about the announcement of Israel as a target port for the first season of Odyssey of the Seas: Royal Caribbean did not use the moment to reaffirm Fort Lauderdale as the ship's ultimate home port.

It's reasonable to interpret that as a sign that the cruise industry isn't confident about the future of the American travel market, at least in the short term.

To some, it's a signal that as long as vaccination efforts in the United States remain slow and restrictions lax, cruise companies could choose simply not to serve American ports.