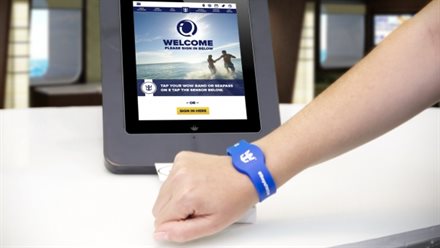 RFID bracelets are officially the mark of a mass-market vacation. Walt Disney World was the biggest player to introduce its MagicBands earlier this year. MagicBands help guests link to their tickets and reservations on rides and restaurants. There, the net effect is to require many guests to do hours of pre-research and strategic planning before arriving at the resort, which I think spoils much of the fun.

But now Royal Caribbean is introducing them, and on a cruise, an RFID-enabled bracelet is a good idea. On today's ever-larger ships, travelers increasingly need to have all of their restaurant and entertainment reservations ironed out ahead of time lest they miss out on something they want to do. Cruisers are already adjusted to using their room keys for purchases—being disconnected from the reality of cash is how so many people accidentally wind up spending so much money—so it's no stretch to simply press a waterproof bracelet to a sensor instead.

Royal Caribbean's Quantum of the Seas, a new ship that will be available starting in November, will use RFID bands to ameliorate some of the traffic jams such large ships can create. The bands will enable purchases, open stateroom doors, and connect passengers to their reservations for things like spa treatments and dining. Vacationers can book everything from home, collect their bracelet upon arrival at the port, and then forget about jockeying for more reservations if they don't want to. The goal, says Royal Caribbean, will be to get passengers onto the ship within 10 minutes.

Once you get a tracking device on a customer, it's very tempting to use it to trace their movements and alter your product accordingly. Disney uses MagicBands to locate customers in the parks and determine guest flow. It's reasonable to guess Royal Caribbean will also use tracking to maximize efficiency and tweak methods for making more profit.

The ship will also implement an app called Royal IQ, which stores passenger preferences and provides an ongoing schedule of events. Royal IQ information screens will also be stationed throughout the ship, where passengers should be able to interact with them through hand signals. (That sounds very nice, but in practice, I find that most shipboard interactive screens tend to be either occupied or broken. Unlike printed signs, which many people can use quickly and at once, interactive screens can only deal with one inquiry at a time and can take minutes.)

The company also promises wireless Internet access that, thanks to a new network of satellites, is faster than anything previously available to the public at sea. No word yet about how much it will charge to use that Wi-Fi; it's never cheap.

While it's at it, Royal Caribbean will also tag luggage so the precise location of your bags can be pinpointed at any moment.

Royal Caribbean is using these advances to brand the Quantum "the world's first smartship." That branding carries over to windowless cabins that have been fitted with screens displaying live pictures of what balcony staterooms are seeing (another idea that Disney implemented first) and to one of the cocktail bars, Bionic Bar, where drinks are ordered by tablet and prepared by pre-programmed robot arms. That's a gimmick unrelated to the wristbands or Royal IQ, but you can see the conceit the ship is going for.

One of the Quantum's "Experience Advisors", incidentally, is entertainer Kristin Chenoweth. Don't tell us—she's a robot, too? It would explain a lot.