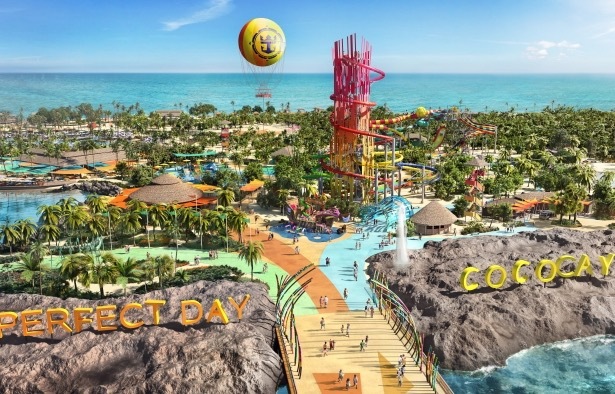 Most passengers on a Caribbean cruise are by now aware of the “private beaches” and “private islands” that cruise lines operate for the purpose of keeping you from contact with local residents or businesses when your ship alights at a particular port.

This deliberate segregation has been tolerated by most of us because the artificial beaches or ports have been operated in such a way as to be relatively democratic.

No longer. In announcing renovation plans for a private beach on its Bahamas island called CocoCay (an artist's rendering is pictured), Royal Caribbean International has revealed plans for a facility charging horrendous sums for upgraded beach areas and beach facilities, meals, and amusement rides.

Unless you are willing to pay hundreds of dollars more, you will become a second-class citizen.

Will you be permitted to lie on the beach? Yes, but if you wish a beach umbrella, you will pay extra. And you will pay $55 to $94 extra to stay in a special beach club, and you will pay $259 to $569 for a beach cabana, depending on the season.

If your children want to play on the zip line, they will pay $79 to $139 more to do so, and an additional $24 to $64 to go up in a helium observation balloon. And to take a meal in a piracy-themed restaurant, you will be charged a la carte prices even though you have already paid for meals for the duration of your cruise.

You will be confronted with their anguished pleas to enjoy everything from a zip line to a balloon, and you will disappoint them if you don’t want to spend an extra few hundred dollars.

I, for one, would not want to face this extortion on a cruise whose price I have already paid. And I have less-than-normal regard for the money-happy types on Royal Caribbean who think up these extortionate facilities.

Next time you book a Caribbean cruise, make sure it does not stop at a so-called private port or private island, but goes instead to normal cities or towns of the Caribbean.