Rustling Up a Good Time Playing Cowboy In Fort Worth: Why You May Want to Choose This Texan City for Your Next Long Weekend Away 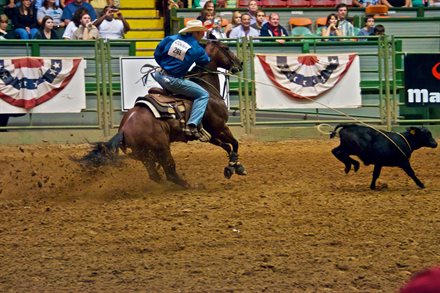 The Texas most tourists see isn’t the rootin’, tootin’ West. Dallas and Houston are sedate-feeling cities of gleaming, Shanghai-like skyscrapers; Austin’s beat is more alt music than country; and San Antonio puts the emphasis on the “Mex” in Tex-Mex—perhaps the real meaning, today, of “Remember the Alamo”.  Fort Worth, however, is the big city exception, a burg that wears its cowboy boots, 10-gallon hats and nickname “Cowtown” with Texas-sized pride.

It has a right to do so. For decades, the stockyards here—today the Fort Worth Stockyards Historic District—were among the top ten most important markets on the continent, known as the “Wall Street of the West” for the thousands of heads of cattle, sheep and horses that were traded here. As the starting point for the Chisholm Trail, this was also the last glimpse of “civilization” for many of the settlers who ventured further west.

It’s not a past you have to guess at when you come to Fort Worth. The historic core, with its rowdy saloons, steakhouses, Stetson stores, classic western architecture and cobbled streets, look like a set John Wayne should be loping down. Instead, every day at 11:30am and 4pm, the main drag, Exchange Avenue, echoes with the clip clop of hooves as slow-eyed, majestically muscled longhorn cattle are herded to and from their pens. Seeing them, and the horse-mounted cowboys who keep the herd moving, is about as thrilling a parade as I’ve ever witnessed.

Most follow the procession to the 1907 Livestock Exchange building that houses the dusty, but still intriguing, Stockyard Museum, its glass cases filled with packing plant machinery, pistols, Native American headdresses, telegraph manchines and more items that bring to life, along with a well-done video, what this area of Texas was like to live and work in during its prime. And though it’s not a tourist sight per se, the building also houses an auction house where over 20,000 animals across the U.S. might be bought and sold in a day; the old-fashioned sing-song chant of the auctioneer is interrupted by the pinging of email and cellphone rings as three dozen cowboy hatted buyers, staring intently at screens, make trades. 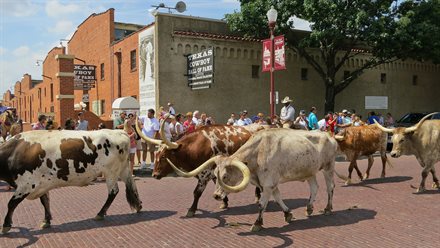 Across the street the Texas Rodeo Cowboy Hall of Fame, set up in a heritage mule barn (with cathedral height ceilings), devotes several dozen wooden pens to telling the life story of the state’s most notable wranglers and bronco busters, everyone from Lyle Lovett to famed rodeo clowns.  (In another section of town is the more high-tech and interactive, National Cowgirl Museum and Hall of Fame which is also worth a look-see).

I’d be remiss if I didn’t mention that cowboys like their culture. And because cattle ranching and oil drilling are, well, lucrative fields, Fort Worth boasts three mighty impressive museums. The Kimbell Art Museum houses the only Michaelangelo painting in the United States, along with masterworks by Caravaggio, Velazquez and El Greco in two buildings by “starchitects” Louis Kahn and Renzo Piano; and The Modern Art Museum of Fort Worth holds noteworthy changing exhibits, along with a permanent collection that includes a Picasso painting and a William Moore sculpture.  What seems the most appropriate for the city, however, is the Amon Carter Museum of American Art which boasts the country’s greatest collection of Western art, including a number of iconic paintings and sculptures of galloping cowboys by Frederic Remington and Charles M. Russel.

And what’s there to do after dark? If you’re lucky, a rodeo or other event will be taking place at the 1910 Cowtown Coliseum (the first indoor rodeo hall in the nation and right next to the stockyards). If not, don’t fret: there will be live music at the plank-floored, raucous saloons of the Stockyard District, mighty fine rib eyes at the Cattleman’s Steakhouse, and more exotic, gourmet fare (Rocky Mountain elk, kangaroo carpaccio) at the nearby, and excellent Lonesome Dove Western Bistro (run by Iron Chef winner Tim Love).

Can I hear a yee-haw?