Since March, San Francisco's Bay Bridge has been bursting with light nightly from dusk to 2am. At 1.8 miles long and in places 500 feet tall, the Bay Lights is now the largest LED light display in the world.

It's been a big year for moving LED displays on American landmarks. Last fall, New York City's Empire State Building got its own dancing display, although it is usually static and rarely prances on command. But San Francisco's display shimmers nightly.

I say that's good. The city's Golden Gate bridge is about the same age, but it's nowhere as complicated and as impressive, engineering-wise, as the oft-ignored Bay Bridge. Visitors also can't easily see the Golden Bridge from San Francisco's Business District, but the Bay Bridge is within plain view.

Some hotels within view of the Bridge have responded with deals. The Hyatt Regency San Francisco, a hotel known for its meetings that sits right on the Embarcadero, now offers Bay Bridge upgrades for $25. And the Harbor Court hotel, by the fantastic Kimpton company, promises 20 percent off its Best Available rate if you book a harbor view room.

The Bay Lights website has put together a map showing which hotels and restaurants offer good view of the display, which continues nightly until March 2015. 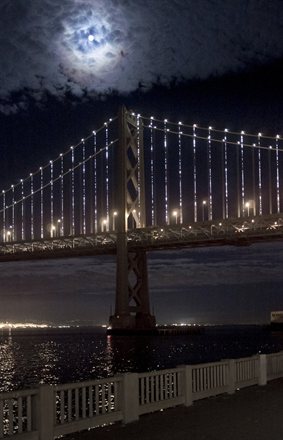