On Friday, SeaWorld opens its new attraction, the multimillion-dollar Antarctica: Empire of the Penguin, which Frommers.com named one of the most hotly anticpated amusement park additions of the season. Although it is at heart an animal habitat for some 250 gentoo, Adelie, king, and rockhopper penguins, the faux-icy pavilion also hosts a ride that, at least in execution, is an Orlando innovation.

In it, four puck-like, eight-person ride vehicles appear to float unguided through chilly, polar-themed rooms, each on its unique path. What appears trackless to the eye is in fact a trick of magnets and the courses are set by computer. It's a ride technology that has been playing to packed houses in Tokyo Disneyland's Pooh's Hunny Hunt for years, but SeaWorld is the first to bring it to Florida, albeit in this modest format. The ride only lasts a few minutes, and only as a short diversion before the real attraction: the polar animals in their 30-degree tank habitat.

To better appeal to families, riders are gradually eased into the cold temperatures, and they can choose "wild" or "mild" versions of the ride. The "wild" actually connotes just a few short whirls and bumps — nothing a small child can't handle. There's also the option to skip the ride entirely and enter the habitat through the back door, which might be a good idea if lines get extreme since the ride itself is so brief. Guests can also view the penguins, both from above and under the water line, in an area with a temperature more suited to humans who don't have waterproof coats of feathers.

To make room for the pavilion, SeaWorld shipped its puffin colony to its San Diego park and swapped one of its most interesting quick-service restaurants, Mama's Kitchen, for the new Expedition Cafe, which sells international casual food such as lo mein, spaghetti and meatballs, and iceberg wedge salad (of course) for around $10 each.

A one-day ticket to SeaWorld Orlando is $89 for adults and $81 for kids aged 3 to 9, and for that price you can return as many times as you want during 2013 using its "Fun Card." 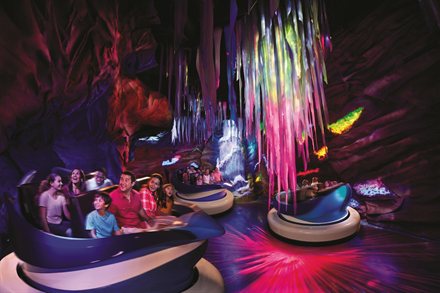