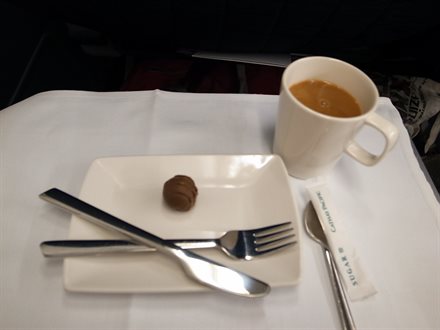 It’s that time of year again! And if you’re like most of us, you’re likely going to make the resolution to shed a few pounds. But like the rest of the gang, that resolution could go flying out the window on your next plane ride (and vacation).

But it doesn’t have to…this year. And that’s partially because the food onboard planes has gotten healthier, according to a yearly study created by Charles Platkin, PhD and founder of DietDetective.com.

According to Platkin, the average airline food item was 388 calories last year; this year it’s dropped to 360. He sees this small change as indicative of a larger trend. “When I started doing this yearly study in 2000, the meals were free and they were very, very high in calories, very unhealthy,” he notes. “Now, of course, you buy your meals on planes, and they often come in snack boxes with individually wrapped items, so they’re easier to parcel out. But the change is more than that. Six years ago, it wasn’t uncommon for airline meals to be huge, better for six people than one, a single portion containing 1100 calories! Today, though the food is often still unhealthy, it’s generally sold in appropriate portion sizes.”

How healthy the food options will be also varies from carrier to carrier. The top two North American carriers, according to the study, are Virgin America and Air Canada. “Air Canada has even hired an outside company to focus on helping them with the nutritional value of their offerings,” he notes. “And Virgin America is doing a fantastic job with their meals — truly fantastic.   All you have to do is go to the airline’s website and you will see the nutritional information for its Travel Light menu. This year, they also introduced “Flight Bites,” featuring fresh salads.”

At the bottom of the nutritional ladder were Allegiant Airlines and Spirit Airlines, though Platkin also calls the performances of soon-to-be-partnered airlines US Airways and American Airlines sub-par. He notes that the offerings of both United and JetBlue are improving.

The best strategy for those trying to get to (or maintain) a healthy weight is to bring one’s own food onboard, rather than relying on the airlines. “But don’t just bring snacks,” he warns. “You’re better off bringing mini-meals. People forget that a two-hour flight really means four hours, or more, at the airport and on planes. So you want something that will satisfy you.” He recommends cutting sandwiches into quarters or bringing meals portioned into smaller sizes so you can eat them in small doses throughout the course of the journey.

Doing so isn’t only healthier, it may make traveling less stressful. “Food affects how you feel,” reminds Platkin. “Usually air travel is a whole day, so if you have a week’s vacation, 2 of the 7 days could be spent getting there and back. Eating well and treating yourself well will increase your likelihood of having a good time on the road.”