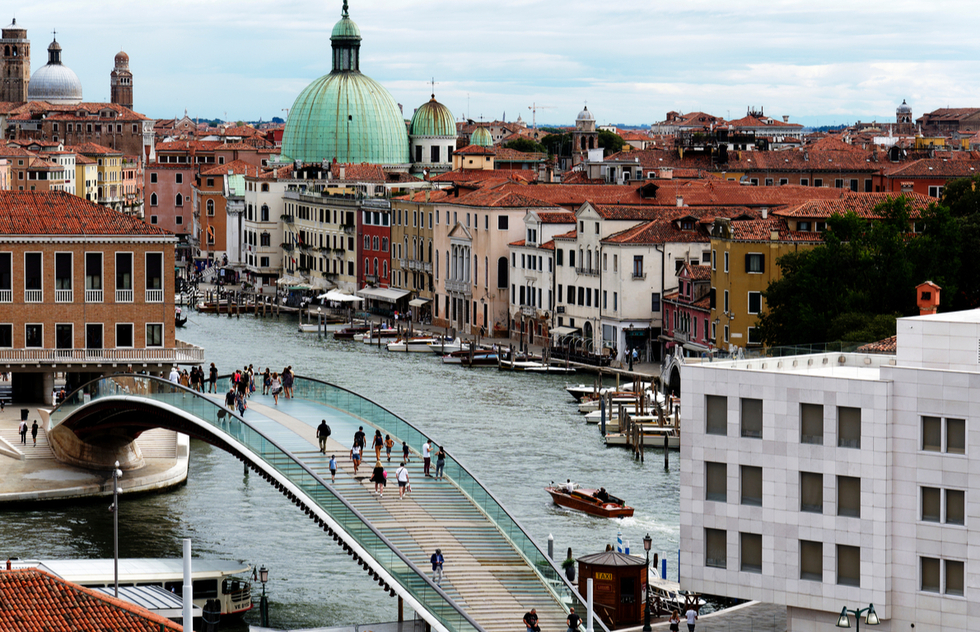 We're not structural engineers or anything, but putting an arched footbridge made out of a notoriously slippery substance in the middle of a famously soggy city seems like a surefire way to create, at best, a very expensive Slip 'N Slide and, at worst, a very expensive lawsuit machine.

Pretty much immediately, pedestrians began dropping like a first-time ice skater attempting a triple salchow—except that the wobbly Venetians and tumbling tourists weren't trying to do anything fancier than traversing the bridge's fiendishly glossy glass tiles. 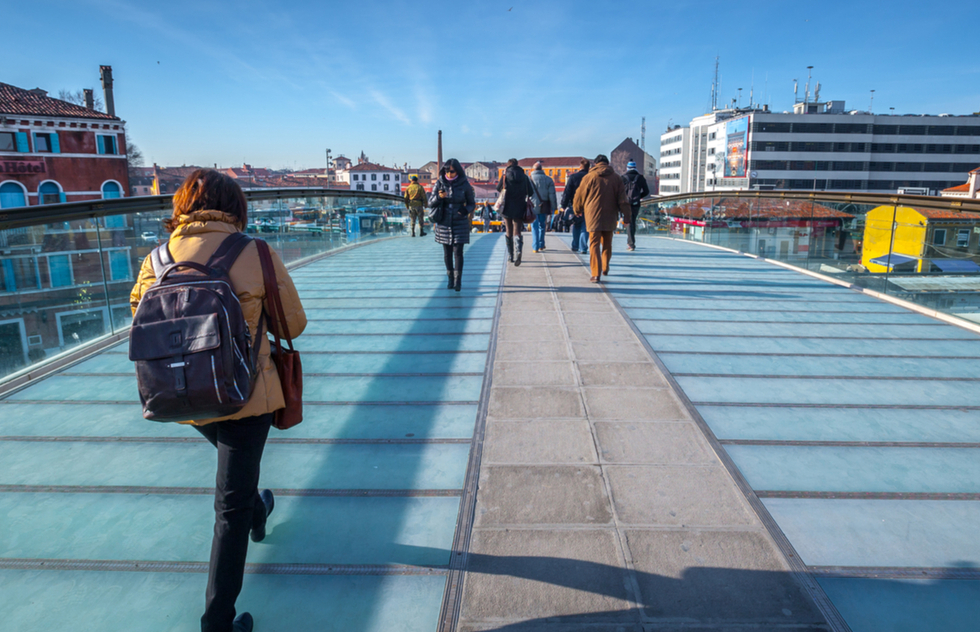 Sure enough, the lawsuits from cracked chins, shattered shoulders, and other injuries began piling up.

“People hurt themselves, and they sue the administration,” as Venice public works official Francesca Zaccariotto told the New York Times. “We have to intervene.”

Past interventions to prevent falls have included additions of resin, nonslip stickers, and signs advising pedestrians to remain on the narrow stone strip in the middle of the structure.

But those measures have not done enough to stop the "almost daily" falls, Zaccariotto told the Times, and the city has had it. Officials have allocated €500,000 (about $564,000) to replace all of the bridge's glass tiles with trachyte stone, even the name of which sounds like it has more traction.

This is not the first time a pricey solution has been devised for one of the bridge's shortcomings.

In response to complaints about the lack of wheelchair access at the site, a €1.5-million ($1.7-millon) cable car was installed in 2013. But it moved at a snail's pace and got unbearably hot inside during the summer and was eventually dismantled.

Nor is this the first Calatrava-designed bridge that has caused trouble.

The architect, who is perhaps best known for New York City's soaring, white-winged World Trade Center Transportation Hub (aka the Oculus), was also responsible for a span with dodgy cables in Dallas (Calatrava claimed that was the contractor's fault) and, as a matter of fact, for another too-slippery glass-floored footbridge in Bilbao, Spain, where a series of pedestrian falls finally persuaded city officials to lay down a big rubber rug.

You can't blame one architect for all the world's impractical bridges. But maybe you can blame glass. Not long ago in China, government officials curbed a craze for installing scary, transparent glass walkways over deep ravines. A spate of injuries, cracked floor panels (eek), and other structural issues led to safety concerns.

It's easy to see the appeal of a glass bridge. With the Ponte della Costituzione, Calatrava found a way to add something strikingly contemporary to historic Venice while showcasing the city's foundational waterway, cleverly bringing together the old and the new.

But what about that old architectural axiom about form following function? Seems like some big-shot designers are all about form swallowing function instead. And when high-traffic public spaces are involved, that can lead to aesthetics taking precedence over safety.

As the public works official in Venice put it to the New York Times, "We can’t always do poetry. We must give security.”