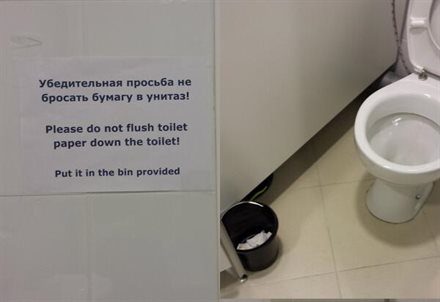 People have asked me what surprised me the most here in Sochi. It's this. Without question ... it's ... THIS.

You might have seen a flood of social media and TV coverage about how messy many of the Sochi preparations have been. You've seen images: open manhole covers on the street, brown water out of hotel taps, public toilets without dividers. A compendium of horrors (downed curtain rods! no hot water!) have been posted by the likes of no less than The Washington Post. In their non-stop efforts to amuse you, news programs are gleefully seizing upon these details as evidence that Putin's Russia must be entirely backward and the Russian citizens must be corrupt or incompetent.

Spud Hilton, one of the last great travel section editors lucky enough to hold that position in the shrinking world of major newspapers, alluded to this not-so-subtle ethnocentrism in a blog post. He pinned the problem on whining by coddled journalists who don't know how to roll with the punches:

"Travelers tend to adapt better," Hilton wrote. "Manhole covers are missing? Watch where you step. The train was early? Find the bus (and make a friend in the process)... Hotel hasn't been built yet? Stow your luggage and start meeting locals. Maybe someone will let your crash on the couch until the situation is resolved. The tap water is brown? Drink beer."

In fact, the problem isn't simply that these journalists are spoiled. They're also naive about the world, and they're showing their ignorance.

Lots of the quirks they're mocking are actually things that crop up again and again in less developed places. Anyone who has been to India, the second-most populous country on the planet, probably had to deposit toilet paper in separate bins instead of flushing it, and they'll also have to do it anywhere the pipes are too old or too thin, from Italy to Africa to Bangkok. It's a reality of aging infrastructure. In Morocco, one outhouse I used dumped directly into a pig trough, but I didn't blame the president for it.

I've also had to avoid drinking the water from the Caribbean to Eastern Europe to Latin America to Nepal, and not once did I blame it on a supreme leader, the way is being done in Sochi. If you have ever traveled beyond your own experience, you already know that not every country has a modern infrastructure like home. Many rusty water mains were laid more than a century ago, and many a hotel clerk doesn't think the customer is always right.

A lot of things make me deeply uncomfortable about Sochi. Russia's human rights record is deplorable, Putin's sloe-eyed egotism overshadows the character of his average citizens, and in light of both of those things, I couldn't get through three minutes of the opening ceremony without thinking of Leni Reifenstahl.

But I can't automatically count failures of infrastructure as proof of a deficiency in any destination, even if I suspect the leader is flawed. They are too universal to attribute so glibly to politics. A little travel will tell anyone that.

In their eagerness to lampoon every Sochi foible, many Olympic attendees have actually revealed how little experience they have with other places. Like a 19-year-old who goes backpacking for the first time and talks too loudly about how warm the beer is, what they are really doing is broadcasting is their astonishment that not everyone in the world is as "nice" as back home.

That's a valuable travel lesson unto itself, of course. Electricity may cut at the wrong moment and water may be rusty. That's travel. But as Hilton wrote, in addition to being able to roll with the punches and experience a place for what it is, warts and all, "some folks just need to get some context."