Special Globe, A Superb New Website for Families with Children With Disabilities, Debuts

Travel was an important, and much beloved, part of Meghan Harris’ life growing up. Her father was a professor, and he used his sabbaticals to show his family the world.  Harris hoped to do the same when she started a family. But her first child, daughter Eliza, was born with Rett’s Syndrome, a chromosomal abnormality that is fatal to boys and causes development delays and mobility impairments in girls. And though Harris still hoped to travel, she found it difficult to find the resources and information for traveling with a child who needed specialized facilities and constant one-on-one attention.

So she decided to become the solution, and create website that would act as a clearinghouse for families with special needs children who wished to travel. Called SpecialGlobe.com, it debuted in late February, and, as far as I can tell, it’s the first of its kind. 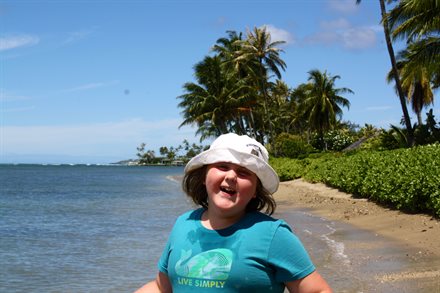 SpecialGlobe’s primary focus is social: Harris hopes to create a meeting place where families with special needs children can share tips, information and support. “There’s a lot of fear involved in traveling with children with disabilities,” says Harris. “A lot of families don’t get out, even to the movies on a weekend, because they worry that the world won’t be accepting of their kids.” By encouraging caregivers to share their experiences with others, Harris hopes to show other families that travel can be more rewarding than daunting. “I speak with a lot of families who split up to travel, with one parent staying home with the disabled child while the other parent travels with the other kids. And that causes deep sadness, both for the child who has to stay home, and for the parents, because they’re not creating intact family memories.”

In addition to forums where parents can chat with one another, Harris has posted a number of detailed travel itineraries, based on her family’s wanderings, to show readers, in a step-by-step fashion, how to get the most out of a number of destinations. Users of the site will be adding their own itineraries in the coming months.

Harris has also partnered with a number of entities to offer curated travel products. The massive vacation home rental company HomeAway.com will be providing listings for homes that are accessible to wheelchairs and are sufficiently childproofed. Harris has found a travel agent with expertise in travel for those with disabilities who will offer her services on the site. Special Globe is also be working with such esteemed organizations as the Special Olympics, United Cerebral Palsy and Autism on the Seas. Since the site is so young, these are just the beginning steps.

Today, there are approximately 14.6 million children with special needs in the United States alone, according to the National Survey of Children’s Health from 2012 (the last year the study was undertaken). Their lives touch more than 50 million adults. In Canada, officials have estimated that some 8.3% of children have some sort of disability. So it’s about time that a website has emerged to serve the needs of this huge population. I, for one, wish Special Globe the very best, and have no doubt it will find an audience quickly.