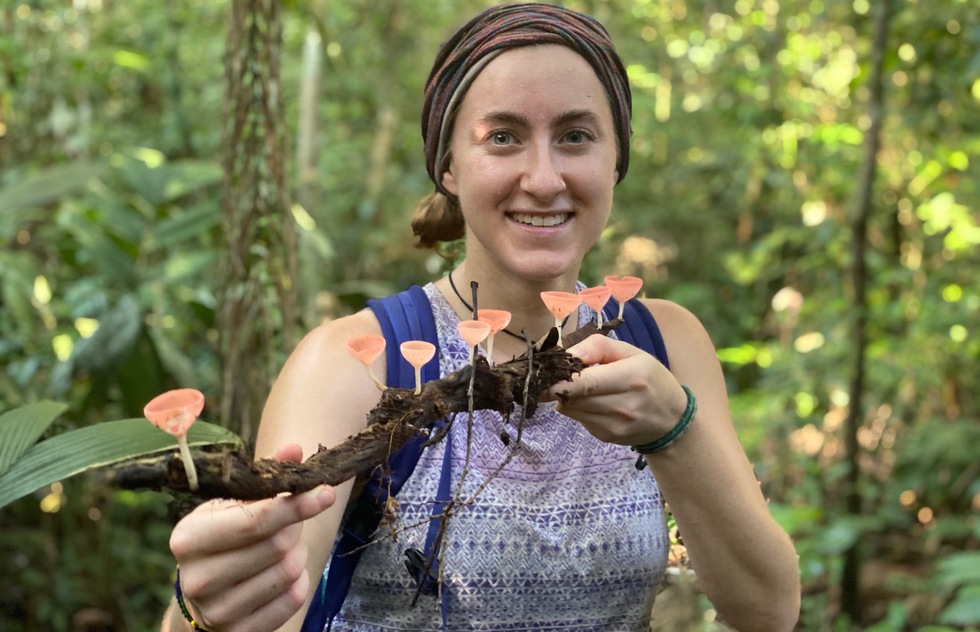 In March 2020, the world shut down with surprising speed. Americans who were abroad then either got home just in time, got stuck where they were, or undertook journeys that would have challenged Odysseus.

Sometimes, though, the tales of repatriation are far more Kafkaesque than Homeric.

One of those intrepid travelers is a young woman named Kera (pictured), a college senior and a friend of my daughter’s. I’ll use just her first name because she had to bend the law to get out of Peru. What follows is a condensed version of our conversation about her extraordinary journey.

Pauline Frommer: First off, I’m so glad you made it back. It must have been a frightening time.

Kera: It wasn’t at first. I was at an NGO [non-governmental organization] on Las Pierdas River in the Madre de Dios region of Peru doing really interesting work toward my degree in environmental studies. Our camp was in the jungle about an hour from the nearest town, and that’s where we could get Wi-Fi. So we were pretty cut off, and had no idea anything was happening until March 13th, when we heard about the virus while in town. The 16th was when quarantine dropped, but we got the information really late. Someone from one of the other NGOs told us that Peru was going to stop all intra-Peruvian flights and international ones in less than 24 hours.

Frommer: Did you try to leave then?

Kera: No. It was nighttime, so I couldn’t have traveled out of the jungle at that time. And I was many, many hours from Lima, so there was no way I would have made it out before the curfew hit. To be honest I wasn’t that proactive about getting out because I felt safe in the jungle and thought I wouldn’t really mind being quarantined for one or two weeks. This was before quarantine was extended.

Frommer: What happened next?

Kera: Over the next couple of weeks we would go into Lucerna [the town an hour away] every once in a while and started hearing scary things. The Peruvian government had revoked constitutional rights and gave the military full immunity to shoot people if they needed to. We heard that tourists in Cusco had been in a van that got stoned [by locals], and we heard about the police going into hostels in Cusco, pulling out gringos and spraying them with Lysol. [Note from Pauline: I have not been able to verify these incidents, but there have been reports of tourists being harassed in Peru after quarantine started.] Then we heard news about the quarantine being extended and I realized I had to get out right away.

Frommer: So what did you do?

Kera: I started calling the U.S. Embassy to try and get help. But I had a chicken-and-egg problem. There were repatriation flights back to the United States, but they were from Lima, and in order to get to Lima I had to get an intra-country travel permit from the embassy. But because it wasn’t certain that I’d make it to Lima in time for the flights [which were only operating on certain days], the embassy couldn’t guarantee me a seat on the plane. No guaranteed seat, no travel allowed in country to Lima. I was speaking to a really nice embassy guy who tried to help, but he just couldn’t make it work.

But then I found out that some Brits at my camp would be getting out. They had a permit and so they added my name to it. So I was basically fake-British. I was very nervous [because I worried] that I would get caught, and also because we were leaving the next day and our timing was sketchy. The day was a day that only men were supposed to be out and we were going to be in a mixed car. [Pauline: To cut down on crowding for a period in April, the Peruvian government divided up the week into days when men could go outside and days when women could go out.]

We got stopped several times by police officers with huge guns at the entrance to highways and bridges. At one stop they got very negative, with the officer yelling and waving his hands and even pointing the gun into the car. Apparently we were missing a stamp and a signature on our permit, which led to us being detained for two hours in a police station. But our driver kept his cool, talked to the officials for us, and eventually we were allowed to drive to Cusco.

Frommer: Good lord! So you’re all alone in Cusco now?

Kera: One friend from the program, a British guy named Ollie, was still with me. And I was able to connect with a woman named Ainsley who wasn’t with the embassy but who had helped her father to get out of Peru the week before, and was now helping other stranded travelers. She had heard about a couple who were going to drive the 20 hours to Lima. They had room in their car for me and would be leaving in the morning.

So I called [my contact] at the embassy. He got me on what he told me was the last plane out of Lima for the States and reached out to the Peruvian authorities for my travel permit. And then, it was totally crazy: Out of the blue, and for no reason I could tell, the Peruvians refused to give me a travel permit! That freaked out the couple with the car. They were worried about taking me, and for a few hours it looked like I was stranded. But Ainsley and I were able to convince them to take the risk.

We left the next morning and the drive was very much like the one I had taken out of the jungle, with lots of police barricades and another two-hour detainment for what they called a "medical check," which was basically just taking our temperatures and a lot of waiting around. I had a ukulele and they had a guitar, so we played music. What should have been a 20-hour drive took 25.

Frommer: Was it smooth sailing once you got to Lima?

Kera: Not really. You see, they had taken me off the manifest for the flight when my traveling permit was denied. I had to go to the American Embassy, and there was a long line out the door—not only American citizens but also others who were trying to get out. But I marched up and demanded to see someone. I was starving and exhausted because I hadn’t eaten or slept for a day. I talked with my contact, who was super, super nice, got me on the flight, and even sent his wife to meet me at the airport with a packed lunch, hand sanitizer, and a phone charger.

Interestingly, there were marines at the airport organizing everything, and we had to pass by drug-sniffing dogs. We also had to fill out a form promising that we’d pay the government for the flight, but we weren’t told how much the amount would be. I promised to repay the U.S. government within 30 days and the loan is subject to interest. Since my summer job was just canceled, I’m nervous to find out how much the flight cost. But I'm relieved to be back in the United States.

Kera was flown to Washington, D.C., and spent the night there before flying home to the West Coast. She is currently quarantining with her parents.