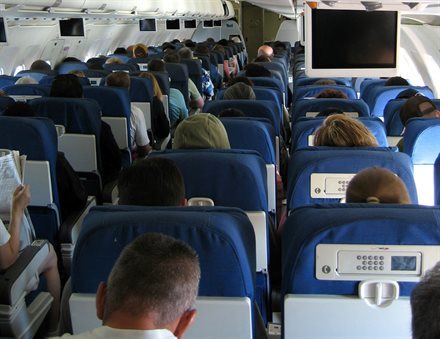 The Case of the Missing Gift Certificate: Flying in the Age of Monopolies

An airplane aisle separated the haves from the have nots. I’m not writing about the aisle separating business class and economy. No, in this case, the left-side of the plane, on a six hour flight from San Francisco to New York City, was in a 21st century crisis: our seatback monitors were on the fritz. The right hand side passengers were lulled into a stupor by visions of Americans who supposedly have talent, and other amusements, while we, digital-free citizens of the sky, could only gaze at the flickering images from a distance.

Punchline: it was a United flight.

Halfway through the journey, a blond flight attendant whose demeanor spoke of the tongue lashings she had lately endured, whispered her way down the length of the plane, stating that because of our "hardship", United would be emailing us $75 gift certificates. She checked my email address, and those of the guys in my row, and I was gushingly grateful.

Alas, I’m less grateful now, as the gift certificate is AWOL. No sign of it, or sign of a response to the email I shot off to United when it failed to arrive.

What surprises me is how surprised I am.

I’m not naïve. I know what flying means in an era of air travel monopolies. Our country has allowed just four carriers to handle over 80 percent of the flights in this nation.

And that has translated to an industry that has long put profits over customer satisfaction. That meant, in my case, that not only did I have to read my book (horrors!), but the knee of the tall man behind me was jammed through the woefully thin back of my seat, and into my lower back, for the duration of the flight. It means that an announcement was made pre-flight that anyone in "Group 5" (code word "basic economy fare" holders) would be barred entry if they tried to board with any piece of luggage that couldn’t fit under a seat. It meant that I would have been charged an outrageous fee had I tried to re-book the flight or checked a piece of luggage. It meant that I was now a consumer with many obligations and very few rights.

So while the airlines are trying to get the optics right, with offers of gift certificates and the like, in the end they don’t need to do anything: they’ll still have my business. Sure, I might choose another carrier to go back to San Francisco, as there’s competition on that route. But on many other itineraries, United (or American or Delta) will likely be my only option. And no number of promised gift certificates is going to make up for that lack of choice and its attendant loss of consumer accountability.