According to the national tourism board of Croatia, some 300,000 United Kingdom residents flocked to the sunny Mediterranean country between January and August, a 24% rise from the year before. And most of them weren't well-heeled playboys. They were young.

What's happening in Croatia? In a word: festivals. There are now more than 20 of them that take over islands and coastal towns, attracting big names in music and hordes of partiers who sun by day and dance by night. Among the crop of crowd favorites are Soundwave, Hideout, and Hartera (electronic), Fresh Island (hip hop), and Outlook (dubstep).

Add to those a bevy of new low-cost airline routes (EasyJet, Wizz, Ryanair), and a youth vacation dynamo is born. Or reborn— if numbers keep rising, Croatia will soon surpass the figures it enjoyed before 1990, just before its ugly divorce from Yugoslavia. Croatia has become the Dalmatian Daytona.

Opposite Italy's eastern shore, Croatia was rediscovered by the middle class over a decade ago, after the country emerged from its bloody civil unrest. Vacationing Europeans reclaimed its Adriatic getaways such as Dubrovnik, Hvar, Split, and Rovinj, rebuilding the vacation home market and hotel inventory alike.

Because so much of its surge in popularity is derived from the European market, the tour operators with the most developed Croatia product for young travelers tend to be European, too.

On the Go Tours (www.onthegotours.com/Croatia), to take one, has developed a line of vacations that show travelers the country floating on the impossibly clear Adriatic aboard old-fashioned wooden boats with twin bunk cabins. It's a relaxed way to see the sights, with minimal interference from staff, and some people prefer this method to fussing with a rental boat themselves. The week-long tour that begins and ends in Dubrovnik goes for $959 double occupancy (add $549 if you want a cabin to yourself), including breakfast and lunch. The "Sailing Split" itinerary, which flits among the islands off the Dalmatian coast, starts at just $819.

Another company, The Fanatics (www.thefanaticis.com), with offices in Sydney and in London, made its name on shuttling young Britons to the big festivals (like Palio Siena in August, Pamplona in July) and sporting events worldwide, but it, too, has branched out to offer casual boat tours of Dalmatia in Croatia. These ships are kitted out more like hostels, and the vibe is decidedly like a floating party, with rates similar to On the Go's. 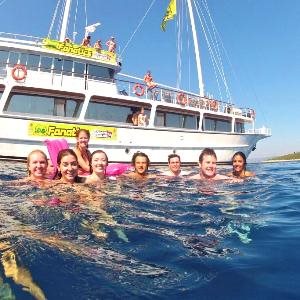