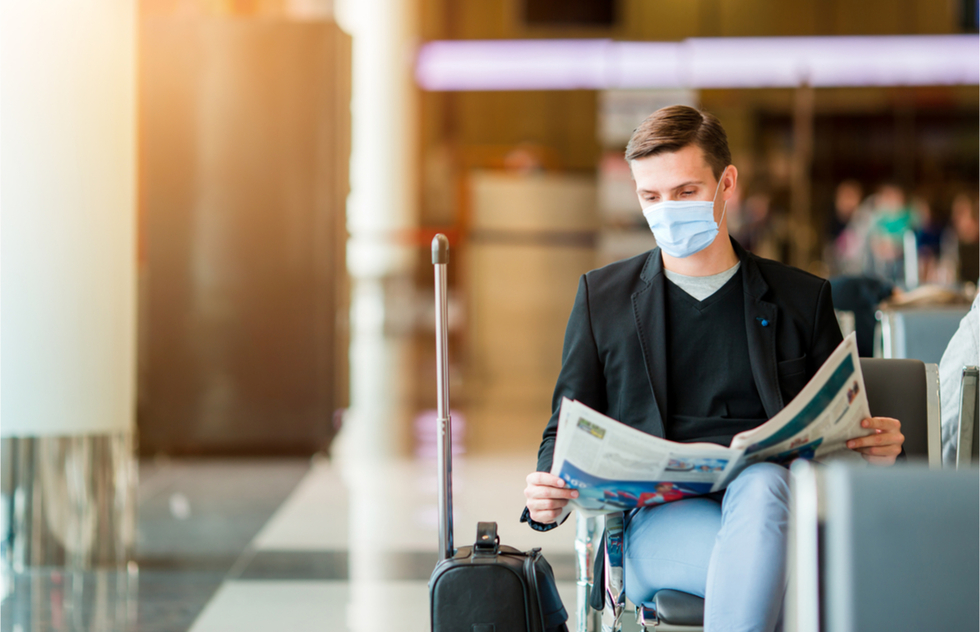 In late July, members of 33 transportation unions—flight attendants, pilots, TSA inspectors, ferry workers, bus drivers, and others—filed an official petition with the Department of Transportation begging for a federal mask mandate on all commercial transportation.

Such a move clearly would have made sense. Trains, planes, and buses cross state lines, so the only way to have consistent measures for the protection of these workers at all times would be for the federal government to set the rules.

It took until Friday, October 2, for the DOT to issue its response—and it's stunning.

The same day President Trump was evacuated to Walter Reed National Military Medical Center for treatment of Covid-19, a letter from the DOT (led by Elaine Chao, the wife of Sen. Mitch McConnell) went out.

It said, basically, Sorry, workers, we don't want to help you.

Acting as deputy secretary for the DOT, General Counsel Steven G. Bradbury wrote, "The Department . . . embraces the notion that there should be no more regulations than necessary. We emphasize consideration of non-regulatory solutions and have rigorous processes in place for continual reassessment of existing regulations to ensure they remain cost-justified and narrowly tailored to address an identified market failure.”

That’s a lot of legalese, but the translation boils down to: profits over people.

In Bradley’s view, the DOT should merely watch airlines and local governments come up with solutions of their own, but it doesn't feel like introducing regulations unless they're to address "market failure.” That means, I assume, that health concerns are off the table, even if there's no other authority around to set rules. As far as the Department of Transportation is concerned, the purse is what matters and regulations exist for that.

Which makes absolutely no sense.

This administration, however, has decided to ignore its basic responsibility to keep public and transportation workers safe because they haven't been justified by cost.

But this lack of regulation may hurt the airlines' bottom line. Airline CEOs know that. They have also been asking publicly for regulations—for months.

In early July, Ed Bastian, the CEO of Delta Air Lines, told CNN in no uncertain terms that he was for a federal mask mandate on airplanes.

Later in the month, Southwest Airlines CEO Gary Kelly took a humorous approach to make this point, saying to Jim Cramer on CNBC’s The Street, “Let’s mandate masks. You have to wear pants. Why can’t we mandate that you have to wear a mask in a pandemic?”

Their fellow airline chiefs have echoed those sentiments in many different settings.

There may even be a "market failure" to address in this problem. In poll after poll, we see that passengers, on the whole, want masks, too. They feel so strongly about it that in recent days, fistfights have broken out in airline cabins when people refused to mask up.

If would-be customers knew everyone on commercial flights had the legal obligation to wear a mask, more of them might be willing to fly, which would help boost ticket sales and keep the airlines solvent.

But let’s look beyond the money concerns for a minute. Asking the federal government to regulate masks in spaces where there is no other obvious authority—for example, during interstate transit and in the skies—is simply the most ethical, logical thing to do. The government is already in the business of saving American lives. There are thousands of examples of laws and regulations designed to do just that.

As Dr. Robert Redfield, Director of the Centers for Disease Control, said in his recent testimony to the Senate: “Face masks . . . are the most important powerful public health tool we have, and I will continue to appeal for all Americans, all individuals in our country, to embrace these face coverings. . . . We have clear scientific evidence they work, and they are our best defense."

And if the folks involved in transportation, the workers, and their bosses, want this regulation, what's the problem?

In a statement released while Trump remained in Walter Reed, the head of the Transportation Trades Department of the AFL-CIO labor federation responded to the DOT's rigid statement and mourned the feeling of abandonment by his own government.

"It is unfathomable that in the midst of a global pandemic which has killed more than 209,000 Americans, and left millions more sick and potentially facing lifelong side effects—including the president of the United States—that the U.S. Department of Transportation would outright reject such a simple, science-backed, lifesaving measure,” said the statement. "The DOT’s decision is heartbreaking, and in light of yesterday’s news, frankly, shocking."

His words have fallen on deaf ears in Washington. Officially, cash is all that matters.