Discuss the mechanics of travel with most folks and the talk inevitably turns to fees. Sometimes you can actually feel the room heating up as travelers rail against having to pay extra to choose a seat, change a flight, carry on a bag (or check one) or pony up the dreaded “resort fee" at a hotel. And the higher those fees are, the more the temperature rises.

But there are a different class of fees that some travelers pay willingly, even with delight: those that get travelers to the front of the line. “I always pay extra to board the plane as early as I can to make sure that I get settled for my flight and to make sure that my roller board has a place in the overhead bin,” says stage manager Bryan Landrine. “It takes me a couple minutes to ‘set up’ for my flight and have everything I'll need at my finger tips in the seat pocket.”

He’s not alone. Many find the perk worth the money. “I find the minimalish price is worth feeling a little bit ‘pampered’ and takes the edge off traveling,” says television producer Joan Rater. “Lines and waiting can make it feel like you need a vacation after your vacation.”

Others choose the option only for carriers they feel to be especially problematic. New York City actress Kate Konigiser pays extra to jump the line at BoltBus. “It’s totally worth it to board first and to know I will have a window seat on the top deck,” she says. Says Elizabeth Heath, a book editor based in Italy “I have paid for early boarding on Ryanair, because otherwise it's open boarding: a bunch of people crushed into the gate area, and then a stampede to get up the stairs to the plane to get a good seat.”

What’s intriguing, to me at least, is that none of the people I spoke with blamed the travel providers for creating a situation that was so uncomfortable that they had to pay more just to avoid it. Are we simply numb to the indignities of travel nowadays that we're actually grateful for the "privilege" of paying more and thus having a civilized experience.

That, I think, will change if fees rise. And they already are for some segments of the industry. Just this week, Carnival Cruise Lines announced this week that it would near double their fees for boarding early, their “Faster to the Fun” program, from a maximum of $49-95 to $59.95 to a maximum of $79.95 (the price varies by length of cruise).  A few months ago Southwest Airlines raised its early boarding fee 20% (from $12.50 to $15). It seems likely other airlines will follow suit (usually when one ups a fee the others follow). Meanwhile, according to a new study by the New York University School of Professional Studies, the international hotel industry collected a record amount in fees for 2015: $2.55 billion, up 4.1% from the year before. The vast majority of income was from resort fees, but some was from a growing number of early check-in fees. 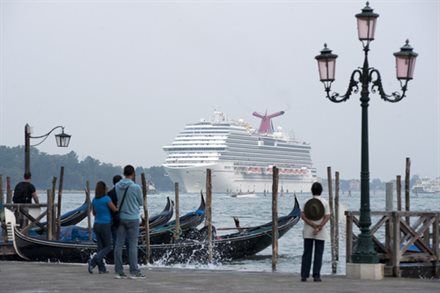 A Carnival Ship in Venice (photo by Carnival Cruise Lines)

And I think passengers will become less eager to pay extra when the airline doesn't really deliver on what it promised. That's what happened to Mikkel Aaland, a professional photographer. "I paid Ryan Air extra for early boarding and got early boarding... early boarding, that is, on to a terminal bus that quickly loaded up with everyone behind me. After the bus was full we drove to tarmac where we all tumbled out and clawed our way on to the plane, first come first served, " he said ruefully.

Frankly, I’m too much of a curmudgeon to pay for the privilege of going early. I just don’t want to hand over a cent more than I have to when traveling for such basics as transportation and a place to lay my head. I’m frugal on those items so I can splurge on the activities that really matter to me, like going to the theater, museum entry fees, great meals, walking tours, zip lining and more.

But if they introduced a fee to be first OFF the plane….well, I might bite on that one.

What about you? Do you think early bird fees are worth it? Or a bunch of hooey?