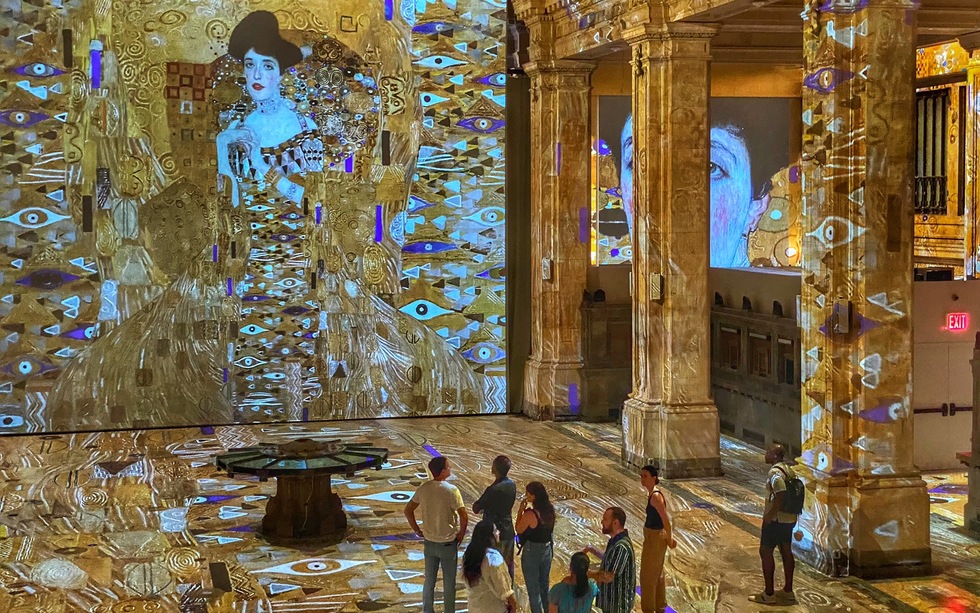 New York City has more art galleries than any other city on the planet. It is also home to 43 dedicated art museums, many of which have world-class collections. So why does it need another art-centric venue?

The short answer would be: It doesn't.

And yet . . . French import Hall des Lumières, which opened on September 14 in Manhattan's Financial District, brings a deeply satisfying experience to the mix.

The new hall houses sound-and-light shows created by IMG and Culture Spaces, the outfits behind a Vincent Van Gogh digital extravaganza first presented in Paris (it's the one that was featured in the Netflix comedy Emily in Paris). The NYC venue will be a permanent space for these types of entertainments, the largest such venue in North America, with shows that will change every 8 to 10 months.

I attended a press preview, and it was clear they're already doing a lot right.

First off, the hall is set in a place of real majesty: the landmarked Emigrant Industrial Savings Bank (1908), on the ground floor of one of the city's first Beaux Arts skyscrapers. It has cathedral-height ceilings and redwood-width columns upon which the curators project images 30 feet tall. After a two-year renovation process, the tech staff spent another entire year mapping every inch of the space to better customize digital projections—and the results are truly dazzling.

Most of the viewing is done from the bank's marble floor, but there's more to explore. At the back of the hall, there's a viewing platform where visitors can see shows from a different angle. In the basement, there are two more digital galleries. One of them is in the former bank vault, now a fully mirrored space reminiscent of artist Yayoi Kusama's famed Infinity Rooms.

The Hall's first show is Gustav Klimt: Gold in Motion. That's a savvy choice of subject matter, as the artist's mix of sinuous patterns and more classically representative portraiture works well with a slow reveal.

Much to my surprise, I found myself tearing up a few times in the course of the show. I hadn't expected to like it, but I did—very much—and felt like I do after a good work out: relaxed and rejuvenated at the same time.

Tickets for seeing the show are timed and offered every half hour. I would suggest going on the hour, rather than on the half hour, because that way you'll see the show in order. The program starts with a look at the art of the period just before Klimt's time, which is a helpful prologue that sets up just how innovative the artist was. 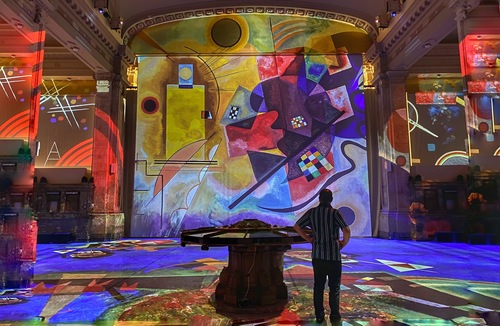 The Klimt section is followed by short piece about Friedensreich Hundertwasser, an Austrian painter inspired by Klimt (his work is pictured above).

Two other video exhibits round out the hour, but they are unrelated to Klimt. They're far more contemporary, showing dance and a science fiction-ish semi-abstract story. To my mind, the Klimt section is the most compelling, but what follows is pleasant.

If you arrive in the middle of a showing, you can stay to see the next viewing. In fact, you could stay all day—though food or drink are not served (perhaps to discourage lingerers).

Information on pricing, hours, and ticket purchasing, is on the Hall des Lumières' website.