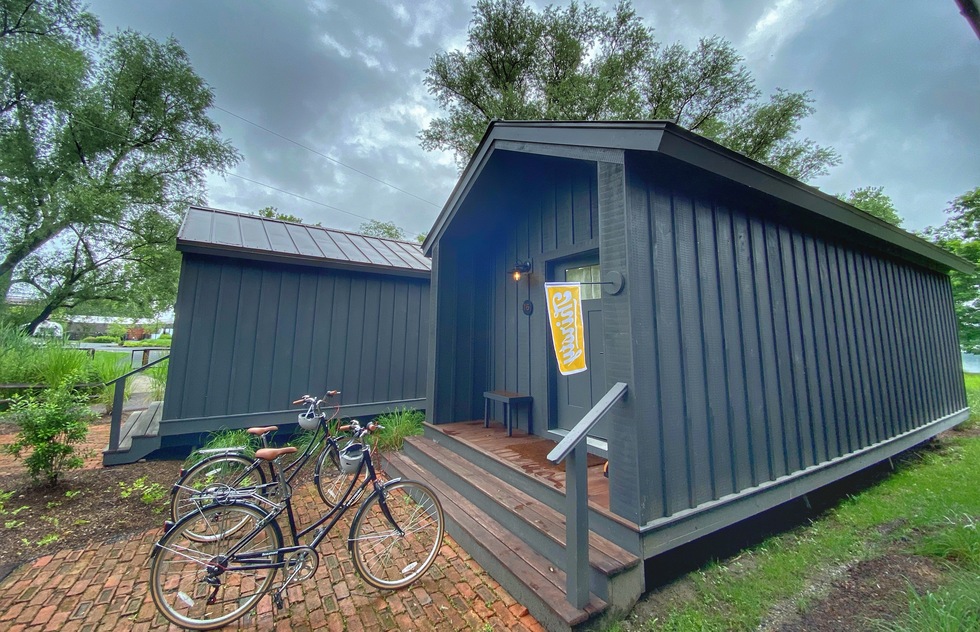 Pillow menus, a social hour with wine in the lobby, goldfish in guest rooms—in the last decade or so there's been an arms race among hotels over which can create the most original amenities. Then when a perk catches on, many other competitors copy it and the cycle starts anew.

In the Hudson Valley, I recently encountered a fun and unique addition to this ongoing game of hospitality one-upmanship. I'll call the feature "Raise the Flag for Cocktails!"

The resort in question is Hutton Brickyards, a collection of small luxe cabins along the Hudson River in Kingston, New York, about a two-hour drive north of Manhattan.

The property equips each guest unit (pictured above) with a bright yellow flag emblazoned with a single word: "Thirsty."

Between the hours of 5pm and 7pm, guests can hang the flag outside their front doors to get the attention of a roving bartender in an electric, golf cart–esque vehicle.

The cart has a wide selection of drinks, from margaritas to Moscow mules, mojitos to malbecs. All are served pre-portioned in cans for the friendly price of $10 apiece.

It's a smart amenity, especially in this era of social distancing, and one that speaks to the aesthetic of Hutton Brickyards, a resort that's on its way to setting a new standard for quirky luxury.

It would have to, seeing as how the place is cluttered with industrial waste.

Very handsome waste, though, as this was once one of the region's foremost brick factories.

Consequently, there are piles of bricks, shards of bricks, and brick-red sand pretty much everywhere you look.

The Hutton Brick Works was in business from 1865 to 1980, during an era when more than 100 different manufacturers made this the early 20th century's largest brick-creating region in the world.

Eventually, steel and glass overtook bricks as developers' building materials of choice, and the bricks that are made these days are mostly shipped in on freighters from China and other places offering cheap labor. 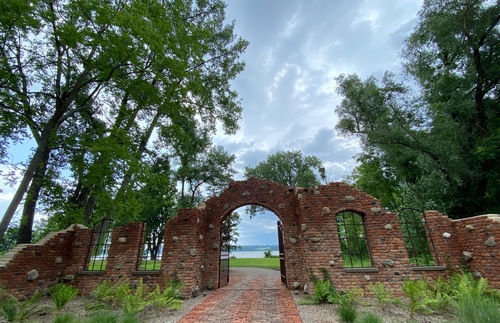 (Once part of a factory building, this ruined gate is the entryway to the cabin compound at Hutton Brickyards.)

Where some might have seen a mess—brick chunks on the lawn, the ruins of a former factory, a derelict crane, several roofless kiln sheds—developer Karl Slovin of MWest Holdings saw potential. Slovin and his partners at Salt Hotels are doing what they can to renovate, restore, and reuse, finding beauty in the site and adhering to sustainable methods to boot. 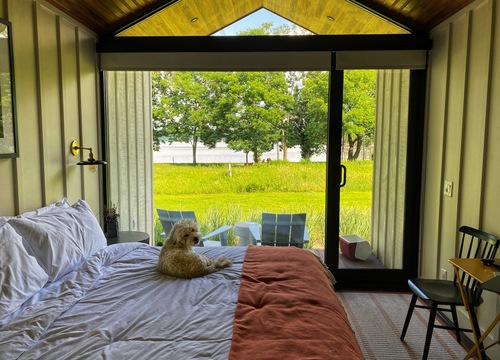 (A waterfront cabin at Hutton Brickyards. Yes, the resort is pet-friendly.)

The 73-acre waterfront property now has 31 cute-as-kittens cabins that look like they might have once been workers' homes. They weren't, but the look of each unit evokes an earlier era, right down to amenities such as record players and porches.

Guests can take advantage of a superb restaurant helmed by chef Dan Silverman, formerly of New York City's Balthazar. Other facilities include an outdoor gym, a spa, and a massive event space created from an abandoned pavilion.

The multiuse Empire State Trail winds onto the property as well, making the resort a terrific choice for cyclists and runners. 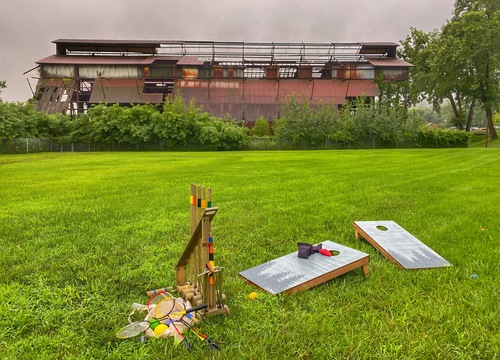 (The ruined kiln house at Hutton Brickyards overlooks a massive lawn often set up for croquet and other games.)

Bricks made here used to be transported by barge down the river, so the property is right on the water. That's a rarity in a region where much of the shoreline is given over to train tracks or Gilded Age mansions.

I can easily see other resorts stealing Hutton Brickyards' roving bar cart idea. But the Hudson-adjacent setting and the bricks scattered every which way will remain unique. So it's safe to say this will stay one of the most wonderfully eccentric places to vacation in the northeastern U.S.

Nightly rates at Hutton Brickyards start at $375. Visit the resort's website for more information or to make a reservation.