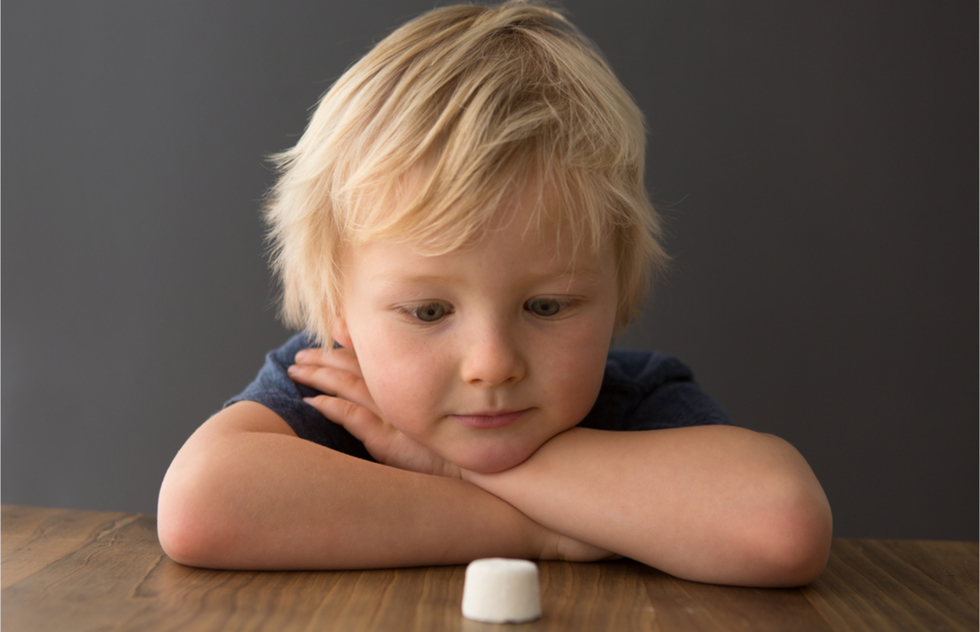 Over six years, from the late 1960s to the early 1970s, psychologist Walter Mischel and his colleagues tempted small children.

In one of the most famous psychological experiments of all time, they offered tots between the ages of 3 and 5 a big choice: They could either immediately eat a marshmallow that was placed in front of them, or, they were told, if they restrained themselves and didn't eat the marshmallow right away, they would receive a more substantial sweet treat later. Each time, the psychologists left the room for a few minutes so that the children could decide on their own.

Some kids scarfed down the marshmallow. Others waited and got something better. But what was most interesting about the study was not what happened on the day of testing. The psychologists tracked the children years later and found that those who chose the delayed reward tended to have higher SAT scores, lower body mass measurements, and higher educational attainments. The ability to delay gratification, it turned out, was an important life skill.

The United States is now undergoing its own marshmallow test.

As Americans start vaccinating the population against Covid-19, a return to normal life (and normal travels) could become a reality in the coming year. We just have to wait.

But will travelers be able to delay gratification to a moment that's safer? We know that despite the current surge in infections across the United States, airline passenger numbers are rising for Christmas and New Year's. On December 20, TSA spokesperson Lisa Farbstein tweeted that for the first time since the beginning of the pandemic, the TSA screened more than 1 million people for two days in a row.

American car travel will also increase this week and next, at least by pandemic standards. About 25% of Americans are expected to hit the road, according to AAA, which means some 84.5 million Americans will drive 100 miles or more.

That's too many people and too much potential for spread. It doesn't help that White House coronavirus advisor Dr. Deborah Birx did not take take her own advice and traveled for Thanksgiving, but that shouldn't serve as an excuse for you to do the same thing over Christmas.

Few times of the year ignite the travel urge more strongly than the holidays, especially for those with far-flung families. But now is not the time to give in.

Cases are spiking across the United States. Covid-19 is now the third-leading cause of death in the country. It will be months before the vaccine is widely distributed and we can be more carefree, but until then, we need to stay vigilant, especially avoiding times of high travel.

As the CDC is flatly saying now: "Travel increases your chances of getting and spreading Covid-19. Staying home is the best way to protect yourself and others from Covid-19."

Be patient just a short while longer. We're so close to a sweeter reward.