They're the meanest roads in America.

If you haven't taken a road trip vacation in the last few years, you're in for a rude shock. More states are implementing what's called "cashless tolls," which require vehicles to carry transponders that roadside sensors debit with the price of tolls. While cashless tolls have sped up traffic on many commuter routes, some states have unwisely and uncharitably added them to major tourist routes.

Miami is the worst offender. In Dade County, the fastest roads to the Florida Keys went cashless last year, with more roads to come. Even though South Florida is one of America's more important destinations for international tourists, it would be difficult to conceive of a more tourist-unfriendly system: If you arrive not knowing about the need for a Sunpass transponder and drive down the main artery through the city, camera gantries photograph your license plate and you are later slammed with fees.

Drivers who can't find a manned booth to pay a 50¢ toll get home to find a mailed bill for $25.50 — 50¢ for the toll, and $25 for a "handling fee."  VisitFlorida trumpets the inconvenience as a good thing: "The new system eliminates the need for drivers to stop at toll plazas," it crows. "The new system is considered safer and more convenient." This kind of cheerleading, which completely disregards the collateral damage for tourists, is common amongst government proponents.

Convenient for whom? Rental car companies are making a mint as well.  Avis, to take an example, charges you $2.95 a day up to $14.95 per rental just to rent the transponder you have no choice but to use, which is a bit like charging extra for a steering wheel—and that doesn't include tolls, which are not charged at the discounted rates that locals receive by using the pass.

There are countless situations in which a visitor wouldn't know about the trap they're about to enter. International tourists might fly into Orlando, a city where some manned toll booths are still available, and then take the 3-hour drive down to Miami where they aren't. Their unfamiliarity with the new rules ensnares them in the government's sticky toll trap. Many tourists see America this way—there's no way for them to avoid an ambush. 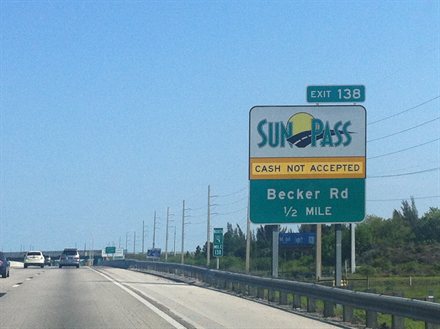 On roads with a mix of manned and unmanned booths, there's no way for a visitor to easily predict what the exit they will be. (The photo below is one example of an unmanned exit—where's the warning of the huge fees that you'll have to pay?)

Americans get suckered, too. If you have a transponder from another state, it won't work (with the exception of an agreement between Florida and North Carolina that began two weeks ago), so what is a visitor from another state to do? If you happen to know about the cashless road that lies ahead, you could buy a pass from $5 from a grocery store, then load it with money for tolls.

If you miss the clues, though, you must pay your fee through the Miami-Dade Expressway Authority, which also collects extra fees in addition to the toll: 15¢ to 25¢ per toll, plus a $3 "invoice fee."  In some states, there's yet another fee to pay your fine by a credit card, and if you don't pay the huge fees, your vehicle registration will be suspended.

When the agency that created the system stands to gain from infractions, you create the potential for a system that is intentionally designed to confuse visitors to raise more cash. In New Jersey, road signage is often so poor the non-cashless lanes aren't  marked until a few yards before it's too late to exit.

Despite the fact cashless tolls have been rising in prevalence for years, rental car companies still refuse to outfit every vehicle with transponders.

So the expressway authority makes a few bucks. The rental car company also makes a few bucks.  And, of course, since now everything is tied to your credit or card registrations, every company along the way is collecting information about your whereabouts and your travel habits.

There's no one on your side, no standardization, no oversight or fee regulation, and no easy way to appeal a fine.

In a current political climate that sacrifices the greater good for mercenary gain better suited to a board room, the government throws itself at any initiative that enables it to either sell our public works to private entities or fire workers without charging citizens less for services. With cashless tolling, it does both, and private contractors get a slice of money that used to go to the roads.

Meanwhile citizens, numb to its impact on privacy and its potential for graft without due process, all too readily go along with those initiatives in the name of technology and speed, even if there are some nasty side effects.

Where else is this happening? All over the country: Denver. Massachusetts. Texas. North Carolina. California, where even the world-famous Golden Gate Bridge no longer accepts cash and the violation fee goes to $70—what's a scenic driver on the Pacific Coast Highway to do—and in many more states and Puerto Rico. It's even in Australia, one of the first places to adopt this terrible system. In Melbourne, the main road from the airport is rigged, so tourists barely stand a chance to avoid them.

We already pay tax on gas. That's what is supposed to pay for the roads. Yet more roads are being charged this way.

This unfair system forces citizens to make additional purchases in order to use public resources, it exposes them to privacy risk and rampant fees, and it gives locals a price advantage over visitors.

We would never put up with it from other industries.