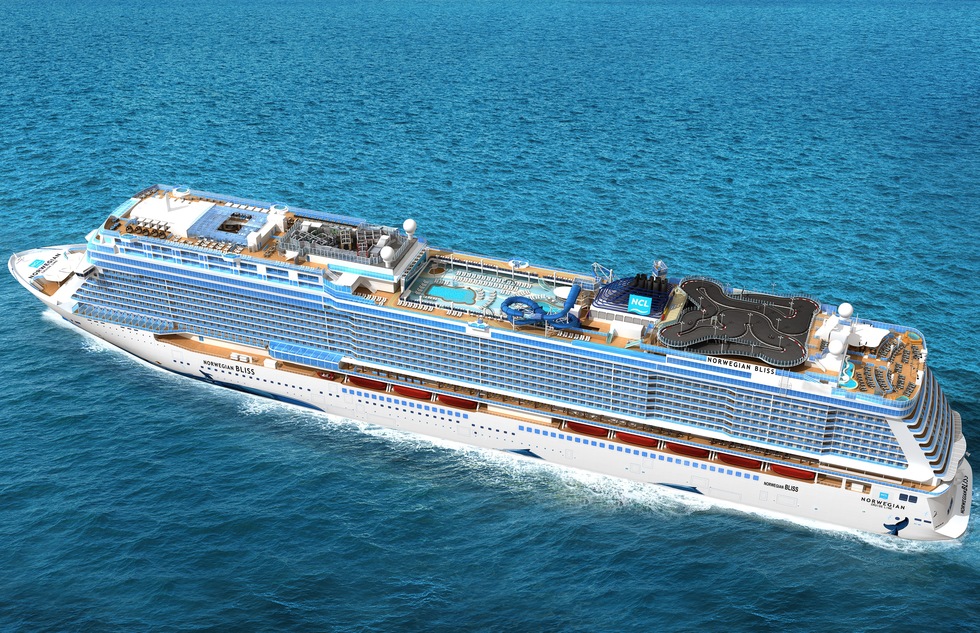 The New Cruise Ship with a Go-Kart Track on Top

In case there was any doubt left that the cruise industry is turning away from retirees and toward Millennials, make way for the Norwegian Bliss.

This cruise ship continues the long industry drift away from shuffleboard and a good book and toward adrenaline sports and pants-wetting thrills: Its signature feature, as seen in the rendering above, will be a twisting go-kart track plopped on a portion of its top deck.

The nearly 1,000-foot-long track will be in a rough cloverleaf pattern on two levels behind the smoke funnel. So that the snarl and fumes of standard motors don't annoy other passengers, these carts will be electric and the sound of engines will be piped into each cockpit so only their drivers can hear it.
advertisement

Another signature amenity on the 4,000-guest Bliss: an outdoor laser tag game themed to an abandoned space station. Just like Ethel Merman used to play with Janet Gaynor on The Love Boat! Add to that a few water slides, including one with see-through segments and one that loops out over the open water.

In lots of ways, what's below decks is typical for a modern cruise, too—stuffed with options and colorful: Starbucks outpost, a bevy of speciality restaurants (Norwegian's system allows you to eat where you want rather than corralling everyone into the same dining room for each meal), a 24-tap beer pub, and more. There are also partnerships with Jimmy Buffet's Margaritaville, the Mondavi wine family, and Mandara Spa. Whereas Royal Caribbean's ships tend to collect guests indoors, as if it's a floating mall, Norwegian's recent ships (starting with 2013's Breakaway) have an outdoor promenade, too, so that customers who are so inclined don't forget that they're supposed to be enjoying the water.
advertisement

The Bliss will also continue Norwegian's welcome trend of carrying cabins specifically for solo travelers. Single travelers won't get windows, but they do get "virtual" windows, which are screens that show them what's outside, as well as a private lounge just for them.

Norwegian has also been offering an open-bar option, which grants unlimited free cocktails, wine, beer, and soda, and that benefit will be on board this ship, too.

The Norwegian Bliss starts sailing in June 2018 and will spend the summer doing Alaska from Seattle and a few Mexican Riviera runs from Los Angeles. Then it shifts to the Caribbean for 7-day Eastern Caribbean itineraries from Miami, featuring calls in St. Thomas (U.S. Virgin Islands), Tortola (British Virgin Islands), and Nassau (Bahamas). Get a closer look at bliss.ncl.com.
Cruises
News