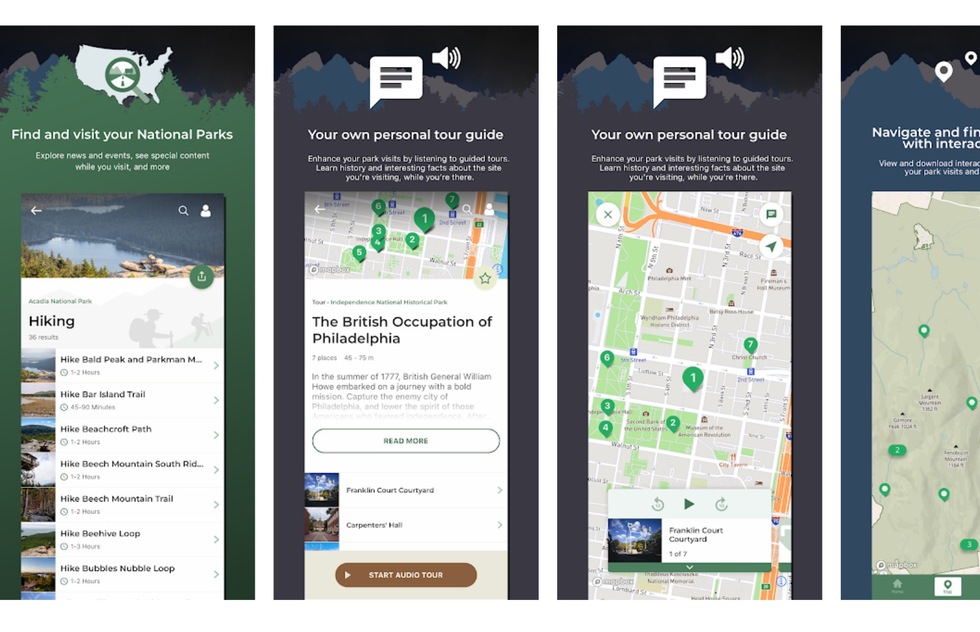 After years of forcing users to track down current information at each individual unit's website or local app, the NPS finally has replaced that scattershot method with a single download (free on Google Play and Apple's App Store) that's worthy of the national park system.

The newly conceived compendium app covers the 420-plus park units under a single icon—and does so with clean style and useful features. Driven by tiled photos, maps, and clear categories rather than dull text, the app aims to be a one-stop collection of useful info on key park components such as tours (in some cases, they're even in audio form) and hiking trails (with helpful pinch-and-zoom maps) as well as accessibility, current closures and alerts, restrooms, lodging, news, permits, and dining options.

Users can now make lists of favorites—both of parks and of things to do within the parks—and keep track of the ones already visited. If you're a person who collects location stamps at each park, the new app tells you where to get those, too.

You used to have to go to a web browser to access lots of park info—directions, facilities, activities, entrance fees, and so on—that can now be found in eye-friendly mobile format if you've got a signal.

That alone is worth a cheer. It certainly took the government long enough—the first iPhone came out in 2007.

Occasionally, such as for webcams, the app will still flip you over to the website, but in general, most features are accessible from the app.

The core code takes up an average amount of space (90 megabytes for Android and 125 megabytes for iOS), but you can also choose to download the full details for any park unit so that you can have them permanently. That memory configuration is a particularly smart one for preparing to be inside a park, where reliable mobile service is often scarce. Even with no signal, you'll still be able to do things like follow trail maps and locate restrooms as long as you've downloaded those details beforehand.

At the moment, the newly released app is a work in progress. News updates on the home screen aren't clearly labeled with the names of affected parks, and the full inventory of information for some sites has yet to be added—it's up to the management of each unit to ensure the facts are populated.

Sometimes, too, the back navigation arrow is overlaid on other art and becomes invisible.

But those issues will surely be fixed in time. The infrastructure works, and it's mostly ready to go.

In this early post-launch phase, I find it best to search for your desired park unit by name—if you rely on the map search function alone, you may not yet find what you need because map links are either too tiny or not yet installed.

By the way, you won't find locations in the Bureau of Land Management or National Forest networks listed—those aren't national parks. The U.S. Forest Service manages its own National Forest Explorer app.

Additionally, some individual national parks might still maintain their own apps for notifying the public about more granular information such as crowd advisories or trail closures. Each park's essential details, however, will live on the new full-system app.

Considering the app comes from a government department that has thus far seemed resolutely intent on allowing some parks to make disasters of their digital outreach efforts, this new creation is anything but static.

The National Park Service appears to want to let Americans know all the ways it's thriving—the home screen even includes a schedule of activities (like tours and concerts) gathered from units across the country. At any time of day, you can glance at the app to see what you're missing at your national parks.

I can tell you one thing we've all been missing up to now: a comprehensive, easy-to-use, visually appealing system-wide app like this. In building it, the National Park Service has shown that it's thinking about how citizens truly use its resources.

I hope the agency remains committed to maintaining this tool on an ongoing basis. If it is, then things are truly looking up for America's Best Idea.