The Queen Mary 2 Makes Her 200th Crossing, and Frommer's is Aboard: Post Your Questions and Requests

Over the next week, the world's only ocean liner, Cunard's Queen Mary 2, will be making her 200th transatlantic crossing. And Frommers.com will be aboard, fact-finding for our readers.

A voyage on the QM2 is considered by many to be one of those unattainable trips of a lifetime. Yet the lowest fare on a sailing is not prohibitively high: Fares for the 200th crossing, which lasts a week, start at $900, or about $128 a night, and that includes meals and entertainment. People regularly spend twice that on a standard hotel room.

The lingo, the activities, and the heritage of sailing aboard the QM2 seem to have a culture all their own. It's not a mere "cruise," aficionados assert. ("The term of art—it is best pronounced while approximating Maggie Smith's cut-glass accent on Downton Abbey—is Cunardists," wrote the New York Times' Dwight Garner recently.) So if it's not like a cruise, what's it like?

The original Queen Mary was one of the most legendary ships afloat, making the same journey 1,000 times between 1936 and her retirement in the late 1960s. (In fact, she's still afloat, and minus many of her fittings, is a popular attraction, hotel, and event space in Long Beach, California.) The new QM2 took nine years to reach her own milestone, having made her first trip to New York City in April 2004, and if history is any guide, she's has many years of service left in her.

Consider Frommer's your personal research assistant. What would you like to learn about the famous Queen Mary 2 and about vacationing aboard her? Add your comments to this post (you will need to register—it's free), and we'll report back after we land on the dock in Southampton, England. 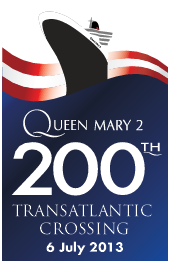