The Wonders of Alaska (In One Relatively Compact Area): Meet the Kenai Peninsula

Alaska is massive. Intimidatingly so. Transpose its outline on a map of the lower 48 United States and its north-south boundaries would stretch from Mexico to Canada, poking up around Winnipeg and dropping down to Tijuana. For many visitors, trying to forge their own path in this vast, and often road-less, land is simply too scary.

And so a good 60% of the state’s tourists opt for a cruise. It’s an affordable means of travel (as I write this, VacationstoGo.com and other agencies are discounting a number of last-minute cruises to between $299 and $752 week); and one that allows visitors to see pristine wilderness areas with little fuss and muss.

But a seagoing vacation is not the only “dummy-proof” way to get a taste of the “Last Frontier”. When Alaskans themselves vacation, many simply jump into their cars and tootle across the 150-mile long Kenai Peninsula (pronounced keen-eye). They know that the Kenai offers all the “greatest hits” of AK vacays—glaciers, soaring mountains, wildlife, excellent fishing, plus Russian and Native American cultural sights—but in a compact, easily drivable area.

So, taking a tip from an Alaskan pal, that’s where I headed last June, along with my 9-year-old daughter.

We were amply rewarded for our choice just 20-minutes into our road trip. Driving along the Turnagain Arm, we saw half a dozen motorists parked to the side and peering off into the Sound.  Joining them, we learned what all the fuss was about: three beluga whales were just offshore, spouting and gliding through the surf, framed by the majestic, snow-streaked mountains across the water. 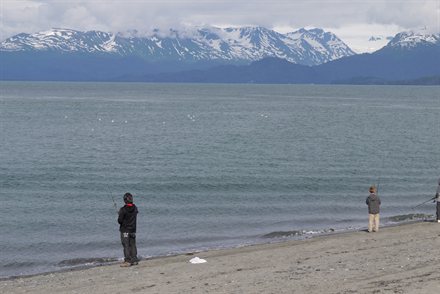 That wasn’t the last wildlife spotting we had, by a long shot. Moose peered at us from behind trees as we drove by, bald eagles soared overhead (they’re as common as pigeons are for this New Yorker in Homer, AK), and trumpeter swans sailed along three ponds we passed. In Seward, a sea kayaking tour with Sunny Cove Kayaking (www.sunnycove.com), had us paddling right beside playful seals, who ducked up and down in the surf 10-feet away, peek-a-booing at us with little fear. We added to our viewing lists several days later in the nearby Prince William Sound (not officially part of the Kenai, but right next door) with a day-cruise aboard Philips Cruises, the “29 Glaciers” expedition (www.phillipscruises.com). Yes, we saw a heckuva lot of glaciers, but more intriguingly sea lions floating by on their backs, babies clutched tightly to their chests. 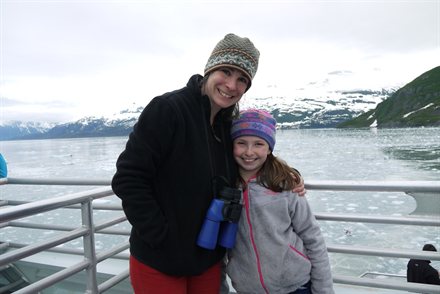 (On the 29 Glaciers Expedition)

And these were just the beginning of the gee-whiz adventures the Kenai Peninsula offered. One afternoon, we learned to ice trek with Exit Glacier Guides (www.exitglacierguides.com), strapping crampons on our feet, and hitting the frozen face of Godwin Glacier (near Seward). Peering deep into the heavenly blue of deadly crevasses and feeling the spray of an unnamed, 500-foot-tall “pop-up” waterfall (it started gushing just this year, a product of Alaska’s record snows last winter) were otherworldly experiences. 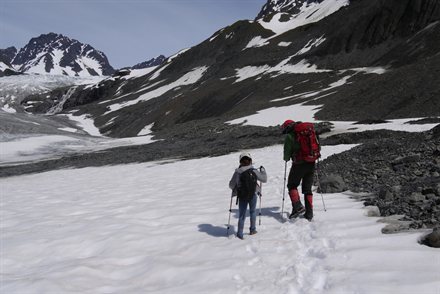 (My daughter glacier trekking with the guide)

Later that same day, we found ourselves zipping through the boreal forest behind a team of yelping dogs.  Mike Seavey, the winner of the 2013 Iditarod, opens his dog sled operation to the public (see www.ididaride.com), and the tour includes a fascinating discussion of how the team (both human and canine) prepares for the arduous race, a 30-minute ride on a wheeled sled, and best of all, a chance to cuddle the new puppies!

Culture is the final element that Kenai delivers. One afternoon, I had the delight of engaging in a long, probing discussion about Alaska’s Russian history with a “reader” at the Ninilchik Russian Orthodox Church, a gregarious Klinket man, who regaled me with tales of how the early priests converted the various native Alaskan tribes to their beliefs. Then, as I sat in a pew, he got to work, singing the scriptures in “tones” specially adapted for the Native Alaskans by early missionaries (an eerie and beautiful “concert”). Another day, we took a one-on-one tour with a member of the Kenaitze Indian tribe at the K’Beq Interpretive Site (www.kenaitze.org, mile 52 of the Sterling Highway), learning about the perks of being part of that matriarchal society, where the grooms had to move in with the bride’s family for two years, and prove themselves as good guys before the marriage could be officially recognized. (An excellent system, don’t you think?). 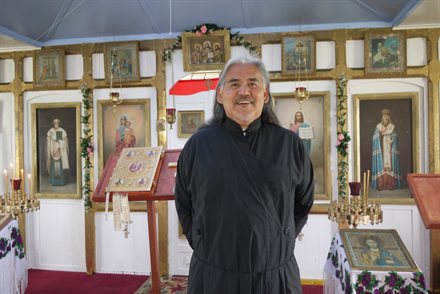 (The Reader at the small Russian Orthodox Church we visited)

We did all this at our own speed, never having to rush back to a ship, or deal with the crowds (with the exception of the 29 Glacier experience)—the kind of experience you have on a cruise and in the port cities they service.

The costs of a land trip, alas, can be higher. Rental car came to about $550 a week for the very cheapest compact. Hotels would have been in the range of $150 a night (again for the least expensive ones, they’re less pricey outside the summer months), so we decided to camp out ($8-$25 a night for campsites). Meals, too, tended to be pricey, with even diners often charging in the double digits for such simple entrees as sandwiches and burgers.

But all in all, our week on the Kenai was one of those bucket list adventures one hopes every vacation will be, filled with revelatory experiences and high adventure. A transporting place—head to the Kenai and you’ll see what I mean.