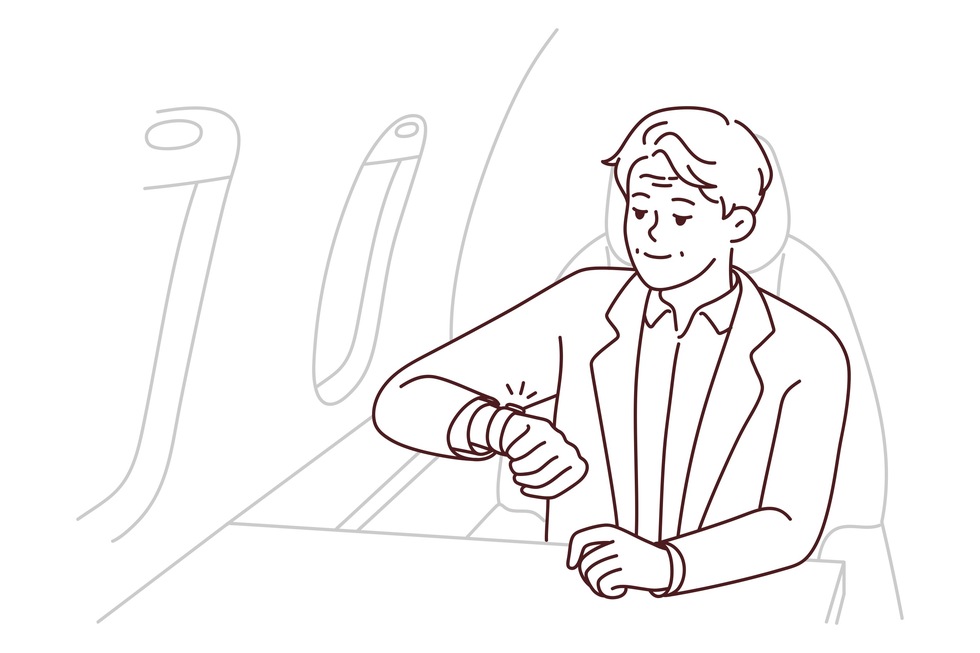 The World's Most On-Time Airlines and Airports in 2022

As it does every year, Cirium, a leading aviation analytics company, has crunched the numbers to come up with its On-Time Performance Review of global airlines.

The annual report card is already well-scrutinized by industry insiders, but this time it signifies much more because it can tell consumers a lot about which airlines are healthy enough to function well under the toughest circumstances.

"During 2022 airlines had difficulty anticipating the sudden recovery in demand," wrote Cirium CEO Jeremy Bowen as the results were announced. "When the recovery finally came this past year, the industry—including airlines, airports, air navigation providers and other stakeholders—struggled with understaffing and insufficient capacity."

As airlines tried to cope with the ramifications of Covid-19, extreme weather, and travel shutdowns, 2022 turned into a telling test for how well each of the world's carriers is organized.

First, the winners from the United States and Canada (all charts are by Cirium). Delta Air Lines (83.63% on time) performed the best, and runners-up United Airlines (80.46%) and Alaska Airlines (80.36%) were so close they were almost in a statistical tie.

Southwest Airlines may have come in 5th (74.05%), but don't expect that result to do much for its reputation, considering the carrier's ghastly and humiliating paralysis over the 2022 holidays.

You might be wondering how these figures compare to what the airlines were scoring in 2019, before the onset of the Covid crisis. Overall, the on-time rate for the leading U.S. carriers sank by 2–3% when compared to their punctuality pre-pandemic. 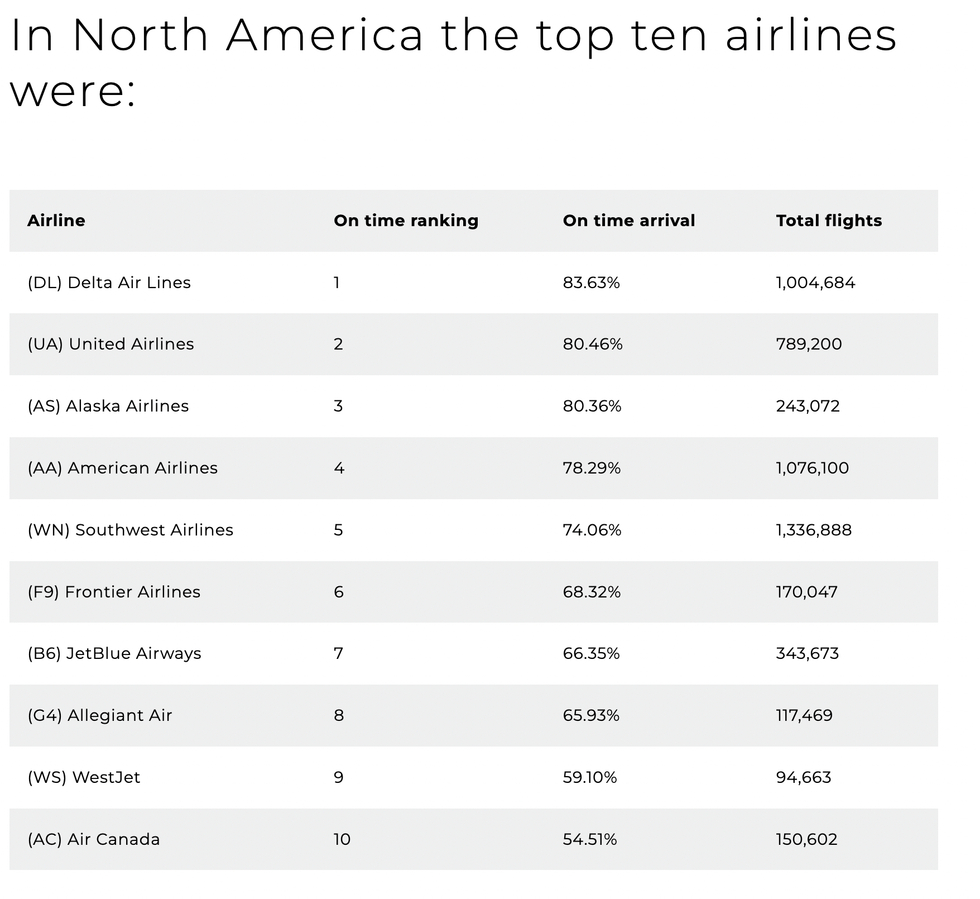 But when Cirium stacked U.S. airlines against their global competition, U.S. carriers fell lower. Delta was the only one to crack the top 5, while United and American came in 8th and 10th, respectively.

Azul, which does the bulk of its flying domestically in Brazil, performed the best, nearly hitting an on-time rate of 89%.

You know who also did well? The Japanese. Two of their airlines—All Nippon Airways (ANA; 88.6%) and Japan Airlines (JAL; 88%)—took silver and bronze.

So now we know: Even pandemics can't stop Japanese airlines from running efficiently. That's a good reputation to have. 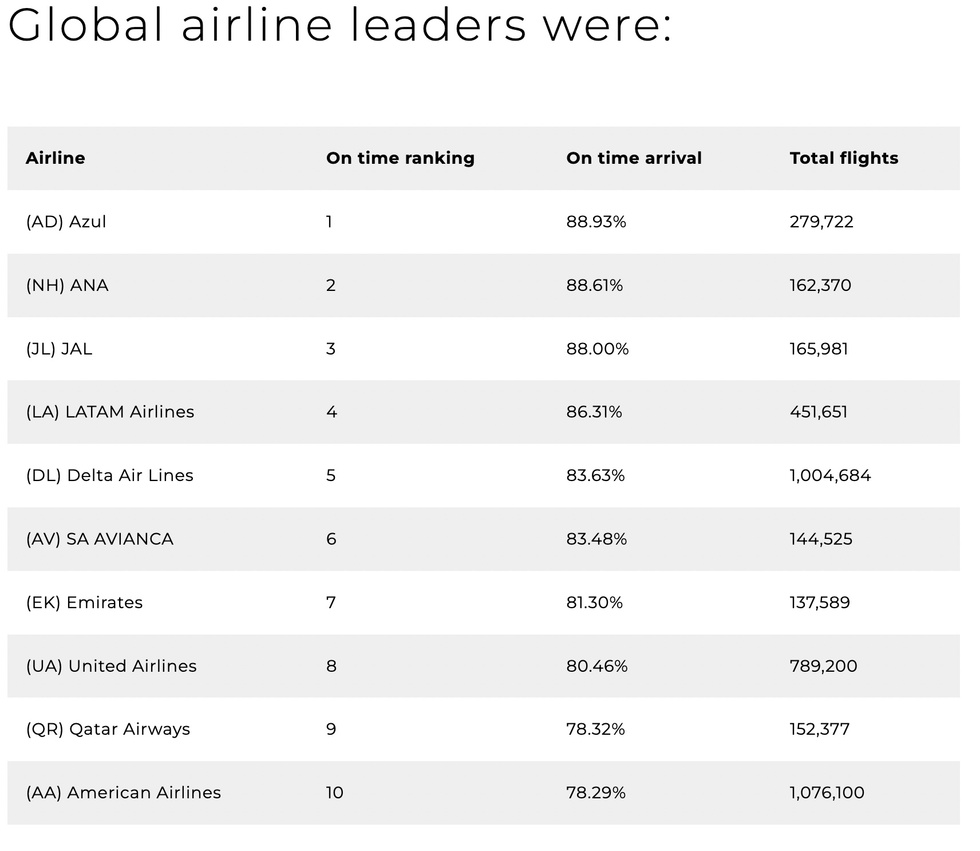 As for which of the world's airports best handled the stress test of 2022, it's another victory for Japan. Haneda Airport in Tokyo took the lead with an impressive 90% punctuality rate.

Second place went to Kempegowda International Airport of Bangalore, India (84%), and the 3rd through 6th spots were claimed by the principal airfields in a string of American cities: Salt Lake City (nearly 84%), Detroit (82.6%), Philadelphia (82.5%), and Minneapolis-St. Paul (almost 82%).

Travelers should take confidence in the fact that many of these facilities achieved these numbers despite snowy winters, but it's also worth noting that compared to the top performers of 2019, on-time departures sank considerably. Back then, all of the leaders scored more than 90%. Now no airport does.

We also see that no airports in China, which used to dominate the list, made the top ranks in 2022. 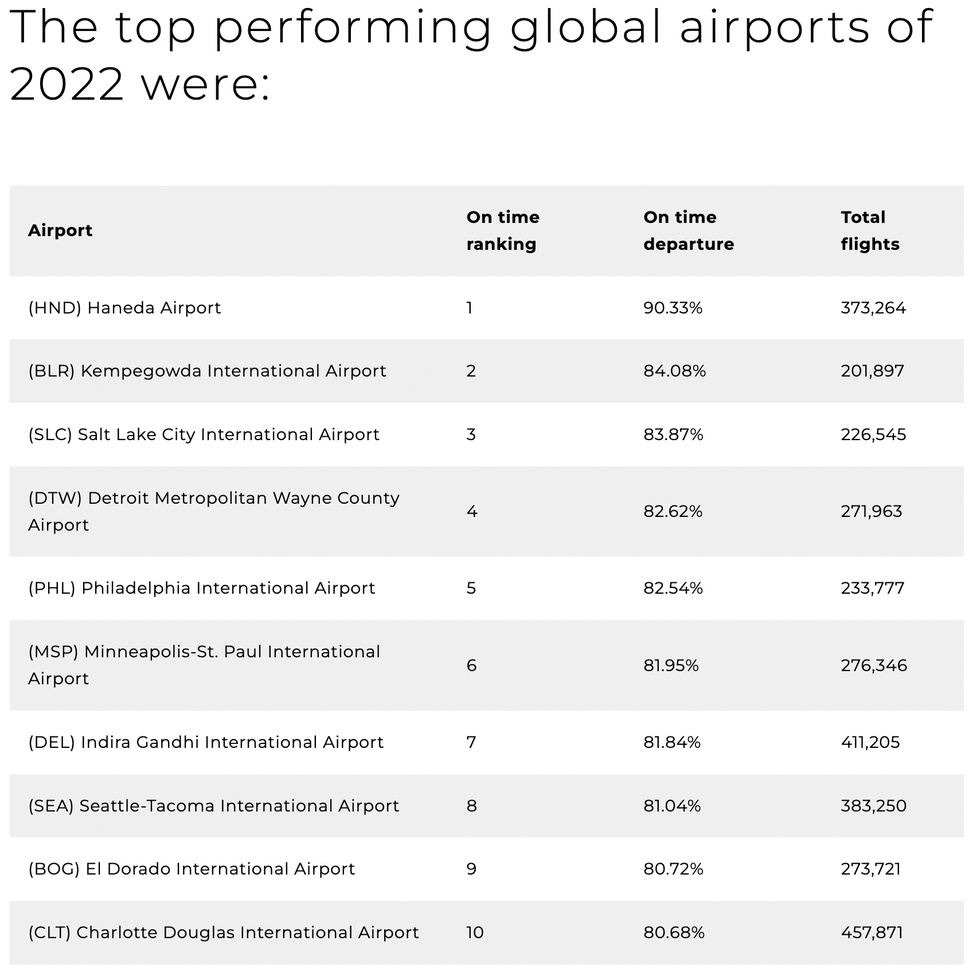 Because 2022 was so turbulent in the world of travel, the year's list of the most punctual airlines and airports reveals which ones competently handled operational headwinds though good planning, staffing, and action—and which couldn't be trusted to come through when the going got tough. 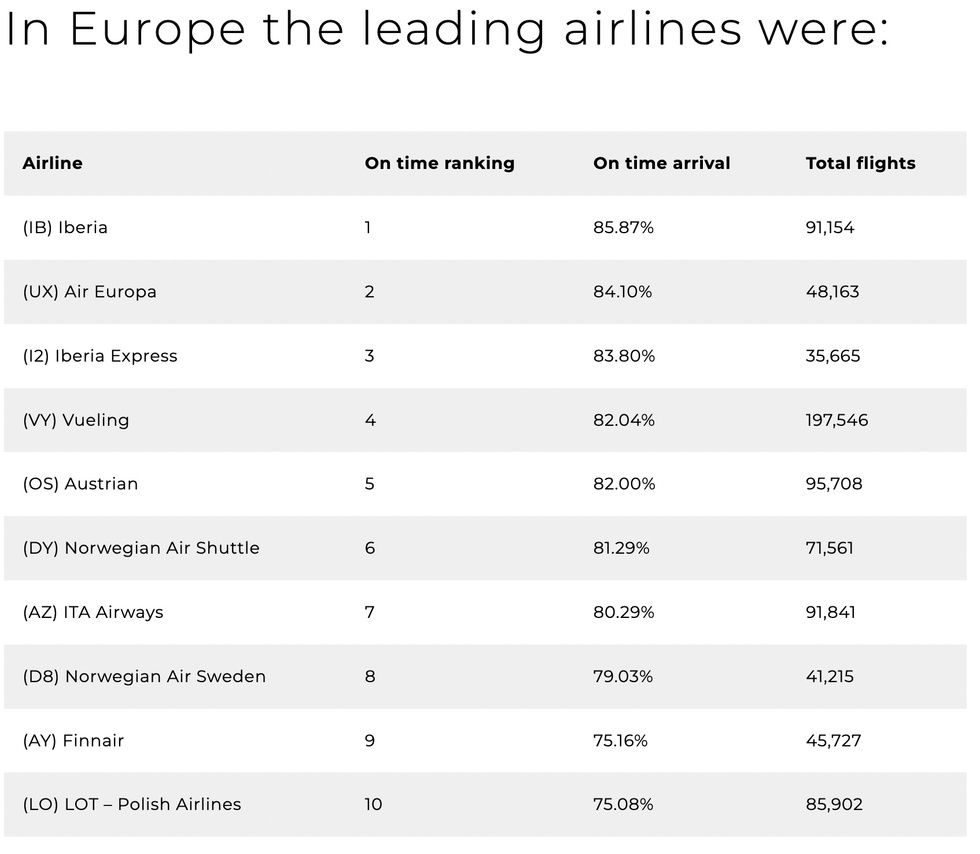