On April 7, the original Universal Studios in Hollywood finally gets its own Wizarding World of Harry Potter. After two phases of the attraction have already opened in Orlando and transformed the fortunes of the Universal resort in Florida, the Los Angeles property is finally getting a taste of Pottermania. Let the Butterbeer flow!

Universal Studios Hollywood was built in a tight hillside location, and experts predict the influx of visitors will stretch the area's limits to tolerate crowds. The preparations for the expected masses of visitors have been extreme: freeway exit ramps are being closed, entire new parking structures erected, pedestrian overpasses built, and season passes voided for the first weeks of its opening.

This week, Universal announced one more major change that we ought to have seen coming: It will charge you more to come when it's busy.

Like airlines and hotels, amusement parks are taking up "demand pricing"—that is, charging people more at times when they most want to go, and charging them less when things are quiet.

Calling it "surge pricing" isn't a fair assessment of how it will work—it won't work the way Uber's does, which doubles or triples prices when cars are in demand. Instead, in Universal's case, the upcharge is regressive: One-day adult tickets will always cost $95 when purchased at the front gates in Universal City. But buy them ahead of time online and you'll get a discount, and that's where the demand pricing comes in.

Discounts for periods of historically weak attendance, such as a winter weekdays, will be $20 off the standard price when booked online. But the advance discount is only $5 when it's peak season or a weekend. Ergo, if you go when everyone else wants to go, you'll pay more to get in than if you go during a day that's marked as low season. No matter what, though, walk-up tickets will go no higher than $95 (for now).

This is no one-off discount promotion. It's a portent.

Universal is couching dynamic pricing as a form of advance-purchase discount, but it won't be long before theme parks are openly charging more for walk-up tickets depending on the day you go. It's almost certain that variable pricing is the wave of the the theme park future.

We know that Disney is mulling something similar. Last year, Walt Disney World circulated a questionnaire among its most devoted guests that asked them what they'd think of a new ticket pricing structure that charged different admission rates depending on how busy things were in the parks. And Legoland Florida did it, mostly unnoticed, when it opened a few years ago.

At Disney's hotels, the pricing calendar is already carefully parsed into pricing tiers. Go when the kids are out of school, and you pay the most. Carrying that scheme over to admission prices is just a matter of time, especially considering the fact that Disney is already battling overcrowding. The company's recent announcement that its annual pass prices would be hiked as much as 31% in an effort to trim crowds. Higher prices crowd out some guests, which leads to a phenomenon we have covered as The One Percenting of Disney.

Higher prices on peak days also encourage guests to plan ahead, which helps Universal and Disney plan better for efficient operations—and ideally, keep long lines in check. Will theme parks now post a SOLD OUT sign on busy days? It's unlikely. Right now, capacity-crowd closures only tend to happen in the thick of the December holidays, and that's without the pressure-release valve that demand pricing could provide.

To encourage even more people to plan ahead, if you book early, Universal will allow guests enter the Wizarding World of Harry Potter an extra hour earlier than the posted opening time, giving them a jump on the crowds.

There is a consumer upside to demand pricing—at least the way Universal Studios Hollywood has structured it for now: It will enable more people to save money off the high admission price, which is not always easy to do under the current system. It will also help people visit on days that are predicted to be less crowded, which ideally would cut down on wait time and maximize the value of their tickets.

The bigger concern now is whether, as crowds shift their plans to previously quiet days in search of cheaper prices, is whether theme park low season is about to become a pleasure of the past. 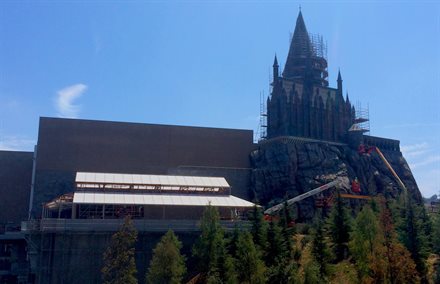 Los Angeles' Hogwarts and its "show building" under construction, September 2015