There is Increasing Evidence that the River Cruise Industry has been Over-Built, and that Discounts are Now Widely Available from all the Usual Sources

Two years ago, the sudden popularity of European river cruises seemed to catch the entire travel industry by surprise.  River boats, and their itineraries, became totally sold out.  A travel activity booked almost wholly by elderly people, suddenly became a trip-of-choice for middle-aged people, and even for a few younger than that.  Families remained  unwanted by the operators of river cruises, but a concerted effort began to to widen the age range of people booking them.

All of a sudden, all of the river cruise companies began announcing plans not only for the expansion of their fleets, but for a considerable re-design of the facilities on board the ships.  Balconies were added to cabins; swimming pools added to decks; cabins were expanded in size or made into suites.  Areas of operation were extended into Asia and Southeast Asia.  Not just the Rhine and the Danube, but the Mekong in Vietnam and the Yangtze in China became rivers that heavily accommodated cruise activities, more than ever before.  Prices soared, and it was rare to find discounts offered to cost-conscious Americans.

The trend was given added impetus by a brilliant tv advertising campaign launched by newcomer Viking Cruises and shown on tv episodes of the popular Downton Abbey and Homeland series.  There, in awesomely beautiful shots, one saw cruiseship passengers enjoying intimate contact with smiling Europeans, visits to colorful balls and performances of the Spanish Riding School, smiling European chefs who offered tastes of their just-cooked specialties to cruise passengers admitted into the kitchens of famous restaurants. 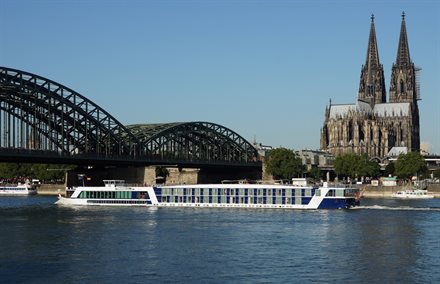 And the result was an unprecedented increase in the construction of more and more river cruiseships.  So many were built, in fact, that now, it may be that the rivercruise industry is overbuilt.

Evidence is accumulating that river cruises are now akin to ocean cruises in the size and frequency of the discounts offered to would-be passengers.  Go to a popular website like Rivercruise.com, and you will find substantial discounts offered on nearly every itinerary of every rivercruise company, including the elegant Viking River Cruise line.  In a pattern than has been witnessed over and over in the travel industry, a popular activity has been over-expanded and forced to fill ships with discounted rates.

It is also becoming apparent that river cruises are being sold to persons who have no desire to experience the wonders of Europe, but are more interested in enjoying the leisure-time pleasures of the boat itself.  Recent announcements of the construction of new rivercruise boats have stressed that they will be equipped with putting greens, with fitness rooms, with heated swimming pools and swim-up bars, libraries and the like--and, of course, with large balconies affixed to cabins.

As for sightseeing opportunities in the cities where rivercruise boats stop, it has been revealed that these largely consist of escorted motorcoach tours with 40 passengers aboard each vehicle, the kind of tour calculated to prevent the participant from really experiencing the authentic life of foreign cities.  Those tv images of famous chefs offering a taste of their wares to a tourist permitted inside a restaurant's kitchen, are simply unrealistic.

So let me be the nay-sayer.  The river cruise, in Asia as well as Europe, is not for the person genuinely interested in the life of a foreign country.  The sightseeing opportunities are limited ones, and the emphasis more and more is on the pleasures of the rivercruise boat.  Moreover, the glimpse of riverbanks that you enjoy while the ship is moving is hardly different from what you would see in any number of other  countries.

For a relaxing vacation interlude, the rivercruise is potent producer of pleasure.  But as an eye-opening, consciousness-expanding trip to a foreign land, the correct method is to experience it on land, staying either in a hotel or--better yet--in an apartment you rent in a neighborhood of the area you are visiting.