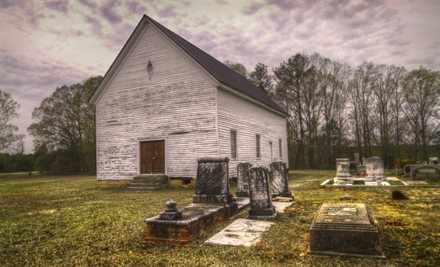 Now and then, we discover a homegrown website that celebrates a topic we'd never thought about much before, and before we know it, we're plotting a new trip.

That's the effect HRCGA.org had. It stands for Historic Rural Churches of Georgia, and it's an elegant compendium of the most charming, the most quaint, the most attractive country churches in the state, many of them with heritage that goes deep into the nineteenth century and beyond.

The artistry and talent of the photographers who lovingly record these bucolic survivors are proof of how much they cherish them. The work of the website, which is to maintain gorgeous galleries of these country churches and give as much history of their origins as can be dug up, is preserving an oft-ignored and vital part of American heritage.

Georgia gives frequent lip service to honoring Southern tradition, but truth tells a very different story. In fact, its past is at grave risk because it has not been in political vogue to apply resources into preserving it. In September 2012, draconian state budget cuts reduced the staff of the Georgia Archives to just three people—and one of them was the janitor. New papers went unarchived and the reading room was closed to the public. Georgia became the first U.S. state not to provide a public archive for its citizens.

The resulting outcry forced the governor to find an arrangement that would re-open the state archive, but the incident was a telling example of how perilous local heritage can be in this age of partisan tax-cuts.

Which is what makes the nobility of HRCGA.org so stirring. These photographers are capturing what could be lost tomorrow. None of these frail, rural buildings has many defenders anymore. Georgia, once intensely agricultural, is now dominantly suburban, and the congregations that lovingly built and maintained these small chapels, many of them simple wooden structures, have moved on to other places. Georgia's government has little charity for them.

Many of the churches on the site are abandoned. Some of them don't even have traceable owners, such as Friendship Baptist, pictured above, which opened in 1831 with just 33 members, 12 of whom were black. There is no one ensuring that these hand-built churches, many of which were erected by during the time of slavery, will survive into the next generation to tell the tale of American heritage.

Clicking through the photos on HRCGA.org is like a trip through another time—and fortunately, they're places where we can still travel if we choose to honor them, both with our visits and our taxes. 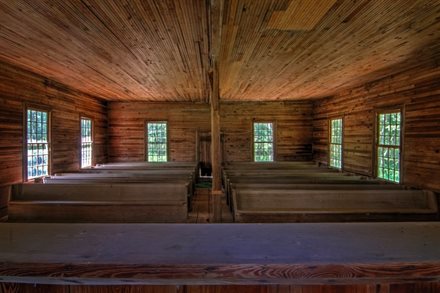 Bethlehem Primitive Baptist (1834) in Brooks County is held together by wooden pegs. (via HRCGA.org)

Frommer's Editor Jason Cochran is on Twitter at @JasCochran