Travel Here, Not There: Why Choosing a "Secondary" Destination May Lead to a Better Vacation 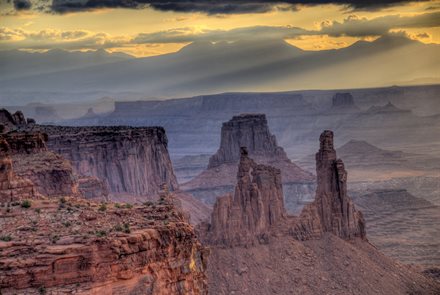 There’s a reason tourists don’t flock to Akron, Ohio. And no, it’s not just because Goodyear decided to close its “World of Rubber Museum” in 2011. (The town’s only real tourist destination, as far as I could tell, when I had the misfortune to spend several weeks in Akron a few years back.) Akron may be highly livable, but it doesn’t have the types of exciting attractions that draw visitors.

Paris—France, not Texas—has the opposite problem. Scads of worthy sights but so many tourists that it’s become woefully overrun with visitors at many times of the year. And with that flood of outsiders comes a host of problems. To give an example: the guards at the Louvre went on strike in April of 2013 to draw attention to the legions of pickpockets who were descending on the museum daily to prey on tourists.

Of course, there are many destinations that fall in that happy middle ground between Paris and Akron. Today’s column is devoted to the wonderful places that are just slightly less popular than the marquee destinations. Vacation areas where you’ll have a smashing time...with a hair fewer people around doing the same thing.

Belize Instead of Costa Rica: Both have remarkably similar topography—beaches, critter-filled rainforests, raft-worthy rivers—but somehow Belize doesn’t have the buzz of Costa Rica. And that was true even before a character on “Breaking Bad” cracked wise about sending someone to Belize as punishment. And Belize, frankly, has more interesting Mayan sites than Costa Rica, which means that travelers can combine exciting eco-adventures, with pyramid climbs and spelunking into caves that are literally littered with ancient Mayan artifacts that have become calcified to the floor.

Gdansk Instead of Bruges: Yes, it’s true that the historic core of Gdansk had to be rebuilt after the horrific bombing of World War II. But head to this charming port town and you’d never know that the exquisite gabled and steepled architecture here wasn’t erected centuries ago. And while it doesn’t have quite the number of old master paintings to view (it does have some), Gdansk also gets fewer crowds than cozy, charming Bruges. And it has some mighty worthwhile attractions in town and nearby, including the Solidarity Museum (this is the home town of Lech Walesa) and Malbork Castle (the largest castle in the world by surface area, and the largest brick structure in Europe. It was built by the Teutonic Knights in the 13th century).

Chateau de Fontainebleau instead of Versailles: If you do go to Paris and are looking for a regal side trip, a visit to this exquisite castle will likely be more satisfying than Versailles. Not only will you be able to breathe (the crowds here aren’t nearly as intense, usually), but you’ll get a fuller picture of what life would have been like for French royalty. That’s because Fontainebleau wasn’t as fully sacked as Versailles during the French revolution. So instead of walking through hall after echoing hall, you’ll see some original furnishings, many splendid murals and a private chapel that rivals any great Cathedral of Europe in its opulence.

Canyonlands instead of Grand Canyon: Here I’m treading lightly, because the Grand Canyon is one of the world’s greatest wonders and should be seen at least once. But truth is Canyonlands National Park, in Utah, gets a fraction of the number of visitors and has scenery that, in many places, seems to have been lifted intact from its more famous cousin. These include deep canyons, phantasmagorical buttes, and striated red rocks. And when you hike at Canyonlands you often do so all alone, and are therefore able to more fully commune with nature. As a bonus: the wonderful and very different Arches National Park is just next door, giving visitors two parks in one vacation.

So there you have it: some of the finest "secondary" destinations in the world. Do you have any that you'd add to the list?