People who use Terminal E in Dallas have experienced the change. Where the TSA checkpoint was once bleak and gunmetal grey, now there is music streaming from Pandora and lavender mood lighting. Hanging on pillars are new flat-screen signs that tell you how much longer you'll have to wait before being processed. No one is barking "Shoes off!" at you—a soothing recorded voice purrs it. And after the inspection is done, there's a  "recompose" area for putting your clothes back on that's comfortably decorated with couches, carpeting, bars for tying shoes, and a mirror.

The TSA only controls its screening points. The airports are in charge of the misery and indignity of the wait. Two airports, Dallas DFW and Charlotte, are taking advertising cash from outside companies in exchange for cheering up the TSA checkpoint.

Dallas's DFW (along with SecurityPoint, the company that supplies the TSA's godawful metal tables that would be more at home in a mortuary than an airport) is being paid $500,000 by Marriott's SpringHill Suites for the branding opportunity. The hotel's brand is splashed across many surfaces, from posters to the sides of the plastic bins.

Don't think that it's being done simply to make the world a better place. It's about coin: Officials from DFW and SpringHill Suites told the Wall Street Journal that if passengers complete the TSA checkpoint in a better mood, then they might be more likely to spend money in the shops.

The project is being done with the cooperation of the TSA.

It's advertising creep, to be sure, but it's also making an undignified procedure a little more humane. You'd think that this is something the TSA would have remedied years ago, but in fact it will take an effort from the operators of the airports themselves.

This is being called a three-month pilot program. If passengers and the TSA alike enjoy the changes, they could be rolled out to DFW's other terminals. Or even to other airports—provided, of course, that your airport is in the mood to take some advertising money to make things easier on you. 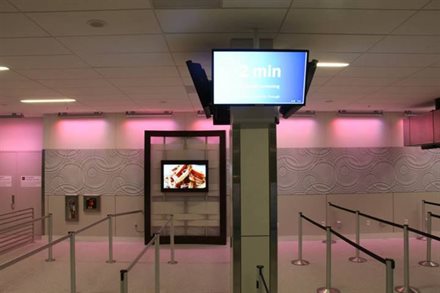 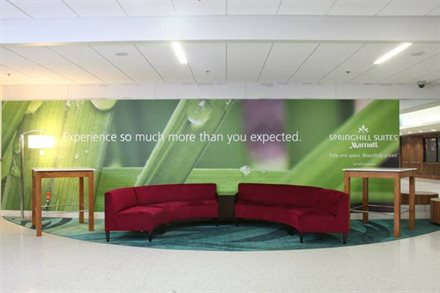 The recomposure area at DFW