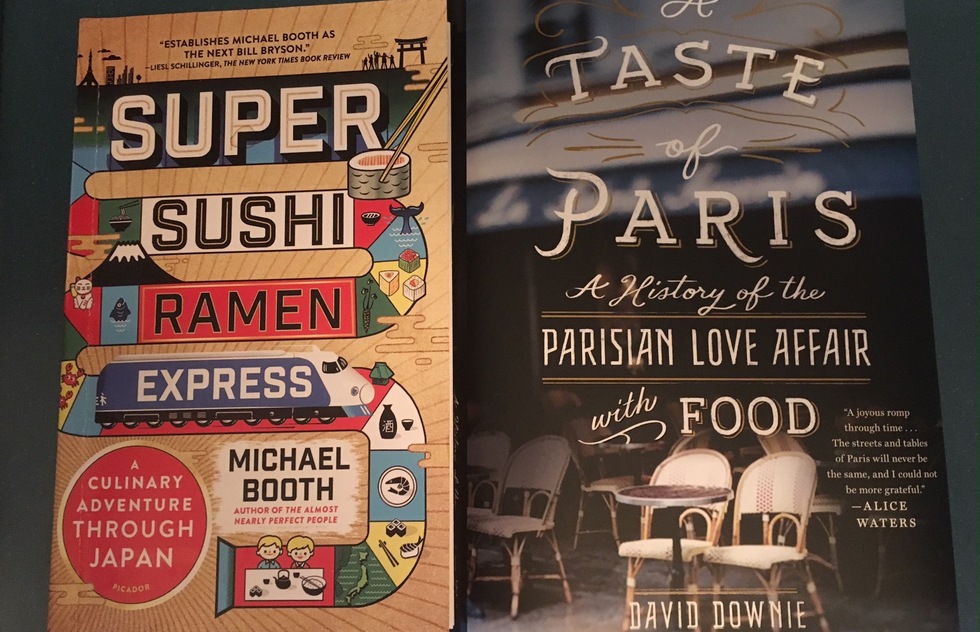 The old cliché "I live to eat" has a new corollary: "I travel to eat."

More vacationers are letting their taste buds decide where their feet (and wallets) will lead them. To aid with that decision, there's a new crop of travel books centered around cuisine.

Super Sushi Ramen Express: A Culinary Adventure Through Japan is one of the most exuberant of the genre. Its writing began with a bet of sorts. Author Michael Booth got into an argument about which cuisine was best, French or Japanese, with his friend Katsotoshi Kondo. Soon he found himself poring over classic Japanese cookbooks, and, not long after that (or at least so the book makes it seem), was on a plane to Japan with his wife and two small children.

The romp that follows is equal parts culinary, cultural and whimsical. At a sumo training stable, author Booth is disappointed to see that the rikishi (strong men) don’t get to feast on chocolate cake or bon bons all day. But he does start to understand the appeal and perils of the sport as his young sons are hoisted aloft and cuddled by the wrestlers as if they weighed no more than kittens.

In Kyoto, Booth writes about the wonders of tofu—and bemoans its declining popularity, even in Japan. The reason? Tofu must be eaten the day it’s made, a practice that’s disappearing even there. Elsewhere, he explores the country’s storied restaurants, its fascination with seaweed, and eventually he and his family even get to take part in an anime cartoon. So who ultimately wins the argument, Kondo or Booth? You’ll have to read the book to find out.

In A Taste of Paris: A History of the Parisian Love Affair with Food by David Downie, the author throws his lot in with Gallic fare, not surprisingly. And he does so in an erudite, joyous way. The book is part guide, part history tome, teaching readers about the history of the concept of restaurants in Paris (mais bien sûr!); the differences between a bistro, brasserie, and restaurant (hint: one is centered around beer); and the fact that such items as snails and frog’s legs aren’t actually French in origin, but simply adapted into its culinary tradition.

Most helpful are the tours Downie makes of today’s restaurants, leading readers to places where they can get a decent meal after a trip to the castle of Versailles and to affordable joints where visitors can eat like the hoi polloi did at the turn of the last century.

After reading these two, and others of the genre, my guess is you’ll likely do one of two things: book a plane ticket or get a snack. Perhaps many will do both.
Food and Drink
Local Experiences