U.S. Government Is Pushing TSA PreCheck to New Passport Recipients, But Global Entry Would Be Smarter

Get a new passport these days, and it will arrive with a new bookmark urging you to sign up for TSA PreCheck. Volunteer some personal information about yourself beforehand, it says, and once you pass a background check, you may qualify to zip through airport security without removing your shoes, your 3-1-1 bag of items, your coat, or your laptop. The other side of the paper suggests another program, Global Entry. The twin sales pitches on the bookmark are downright confusing.

It's a major marketing effort by the Transportation Security Administration and the U.S. Customs and Border Protection, which aims to soon have 100 American airports outfitted with expedited security areas for members of its PreCheck program.

The push to expedited security comes just in time for the TSA. The Government Accountability Office just uncovered a 26% rise in employee misconduct at the TSA in the last three years. Passengers are fed up with the TSA, its inefficiencies, its indignities, and its occasional newsworthy antics. So the more of them the TSA can funnel through the fast lane, the better its rep will be.

Of course there's a catch—it's the TSA, after all. You have to pay an $85 membership fee to access the better treatment of PreCheck. Essentially, the government is creating a class system. If you can afford it, you obtain faster access to services that your taxes already paid for.

Before they take effect, PreCheck and Global Entry both require a quick interview (so the government can gather your fingerprints), usually conducted in an office at an airport, and the validity of a membership lasts five years.

PreCheck already has some 15 million participants, many of whom were invited because they were frequent fliers with their airlines. Members of Global Entry, another paid program that speeds a passenger's passage through American border control after international trips, also automatically qualify for PreCheck.

Which begs a question. Passport holders would benefit more from Global Entry, which works to get into borders upon international arrival and automatically comes with PreCheck clearance anyway. So why aren't the TSA and CBP sticking bookmarks into new passports that solely encourage people to apply for Global Entry, which costs $15 more than PreCheck but gets them more appropriate benefits for a passport holder?

After all, if you're a member of Global Entry, you're automatically included in PreCheck, a fact that is decidedly murky since the TSA is simultaneously pitching both TSA PreCheck and Global Entry to new passport recipients.

The answer is the usual one about government inefficiency: The current directive to is drive more sign-ups for PreCheck, so that's where the salesmanship is going. Officials have gone on record to say they want half of American passengers to sign up for the PreCheck program by the end of 2014. So passengers who are unfamiliar with the different scopes of these programs will likely be confused and because of the sales push, they will buy the cheaper one, even though it gets them less expedited access than they will need for international travel.

The government wants to sell potatoes, so it's telling people to buy fries even though it would be a better deal to get the Happy Meal.

My advice: If you decide you want to participate in this upcharged scheme for essential government services, don't spend $85 for TSA PreCheck. Instead, spend $100 and get Global Entry. They're both good for five years. Global Entry automatically includes PreCheck for TSA screening at the start of your trip, and the extra $15 will also buy you speedy clearance at the end of your trip, too. 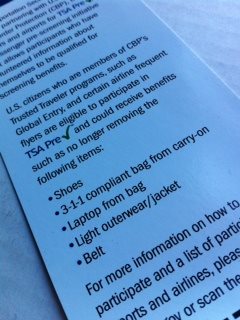