It's a new record! Walt Disney World's Magic Kingdom has raised its one-day ticket price to $99. The Orlando-area resort's other three theme parks, Epcot, Hollywood Studios, and Animal Kingdom, have leapt to $94 per day.

It used to be that Disney raised its prices once a year in late summer. But now the increases are coming fast and furious—the last one was last June when, for the first time, the price of a Disney ticket with tax topped $100.

The Park Hopper option, which allows guests to visit more than one park per day, is $35. The option to add on a visit to a water slide park is $55. For full details visit disneyworld.disney.go.com/tickets.

This as Disney World prepares to do battle with its rival Universal Orlando, which is about to open its multi million-dollar expansion of its blockbuster Wizarding World of Harry Potter franchise. While Disney has no major expansions on the near horizon, it nonetheless enjoy a steady flow of guests who seem to be willing to pay any price the resort asks. The Magic Kingdom is the most-visited theme park in the world, with no signs of slowing. Disney reported income of $3.6 billion at its Disney Parks division for the last reported financial quarter.

Disney tries to entice guests to spend more time and money on park property by granting discounts for those who are willing to purchase multi-day park passes in advance.

But Disney is playing a dangerous game. Just as more people are drawn to visit Universal, the Mouse is also asking even more of visitors. A few years ago, the introduction of its Dining Plan, which encourages advance reservations for waiter-service meals,, made it more difficult for walk-in guests to enjoy serendipitous sit-down meals on park property.

And last month, the migration of its Fastpass program, which enables shorter wait times, from paper to smartphone app has required many visitors to pre-plan which attractions they intend to see—something they used to only have to consider on the day of their visit. Already, guests are reporting that Fastpasses for the major attractions are sold out after lunch, whereas the old system allowed more flexibility. I warned about the increased pre-planning burden last month.

Very quickly, a Disney vacation is becoming something you have to plan for weeks ahead of time with military precision rather than something you can spontaneously enjoy with carefree abandon. The heavy cost just adds to the difficulty.

It's not as if Universal is a bargain, either. Now, to visit both of its Harry Potter areas, you'll have to purchase tickets for both of its parks, doubling expenses.

Florida residents get off easier—the prices for some multi-day passes has not increased, although there are blackout dates for those.

Incidentally, our new guide to Walt Disney World and Orlando has just reached bookstores. As with all Frommer's titles, it cuts through the clutter and dramatically simplifies what you need to know to have a well-rounded, affordable vacation. It's just 256 pages long—totally manageable and portable—and costs less than $10 from the major retailers. Since I wrote it, I know you'll believe me when I say it's the one book written for the average vacationer who simply wants to plan a fun, no-grief trip to the resort. Click here to buy it. 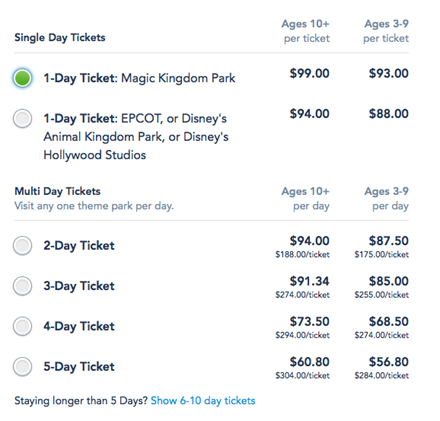