War is Brewing Over the Queen Mary: Petition Alleging Mismanagement is Launched 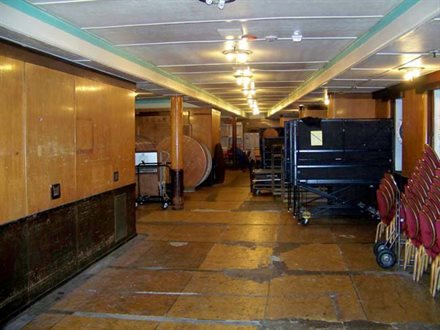 The RMS Queen Mary is a rare artifact from the golden era of transoceanic liner travel. It was launched in 1936, quickly set speed records, and for more than three decades, it crisscrossed the Atlantic Ocean, delivering passengers to the United States and the United Kingdom, both in wartime and in peace.

But in 1967, the ship was delivered to Long Beach, California, where civic leaders wanted not to scrap the vessel, as nearly every other liner had been upon retirement, but to run it as a museum. The Queen Mary, engines removed, has languished in the harbor of Long Beach for longer than it served as a viable ocean liner, enduring a confusing square dance of managing companies that sought mostly to make money off the grande dame of the sea.

When the ship was 31, that was the kind of deal that guaranteed its survival into the next generation. But now that it's approaching its 80th birthday, the Queen Mary is officially a priceless rarity, and it has become clear that as the only survivor from age of the ocean liner, it deserves assiduous conservation.

A group of alarmed maritime history fans have had enough, launching a petition to coerce Long Beach into running the ship with care. "Over the years and up to today, [the City of Long Beach has] done numerous alterations, demolished many historic areas, and left others in a state of disrepair from neglect. The Queen Mary was an important part of the 20th Century and a marvel of engineering and design and the owners need to treat her accordingly."

It's true that most of the ship's original features were lost while it was still in service, first during a transition to a troop ship in World War Two and later, as it returned to passenger service, in the modernization by Cunard, its owner at that time. But the defenders of the ship complain the destruction hasn't ceased even though the objective of Long Beach was ostensibly to preserve the vessel for future generations.

"There have been countless ridiculous events held on the ship that have clearly indicated they have no clue how to maintain such a historic and important landmark, including allowing dirt bikes to race through the tiled and crumbling First Class Pool," says Michael Davisson, an architect and leader of the movement, who thinks the ship's historic importance might be enough to nominate it for a UNESCO World Heritage site—if only it were properly restored and its past honored.

"They have taken a ship that once transported the Queen of England and Winston Churchill, and added burlesque shows and haunted houses onboard," says Davisson. "It is more than a ship. It is a prized memento of history, and the people that own it just want to make it a county fair showgrounds, haunted house, banquet hall and budget motel."

Another defender of the Queen Mary, Bill Cwiklo, has devised plans for how areas of the ship could be revised to better reflect its heritage while still providing profit opportunities to keep the vessel in the black. “It is tragic that we never viewed the QM as a major maritime preservation responsibility, rather we viewed it as a carcass to do with what we wished,” Cwiklo told the Long Beach Press-Telegram. Cwiklo calls his development research Alternative Visions, "a historically sensitive adaptive reuse plan."

Davisson maintains a Facebook page where he documents damage and changes to the ship's original features and spaces, including posting links to the video of a motorcycle race through the ship commissioned by a cycle manufacturer and sanctioned by Queen Mary management.

"She is the only surviving ocean liner from the golden age of ocean liner travel, she must be better taken care of," says Davisson.

When contacted by Frommer's, the current managing company of the RMS Queen Mary, Evolution Hospitality (a predominately Los Angeles-area hotel operator whom a public relations representative identified as Evolution Management) declined to respond to the photographs—more of which appear below—or to the petition. 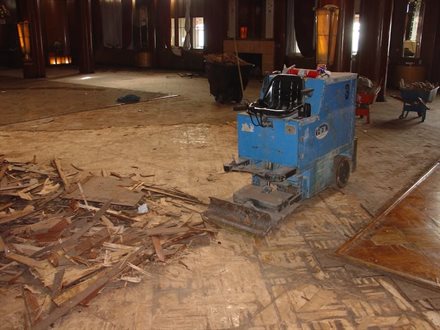 Destruction of the parquet wood floor of the First Class Main Lounge in 2010, courtesy of RMS Queen Mary Facebook Community 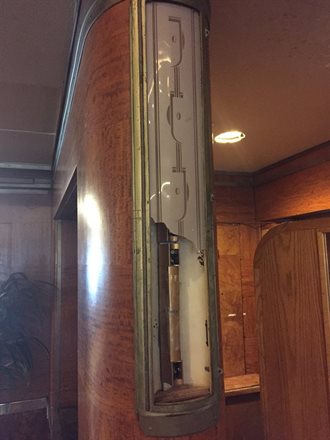 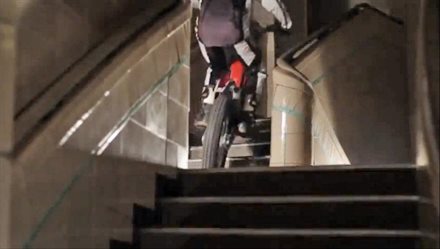