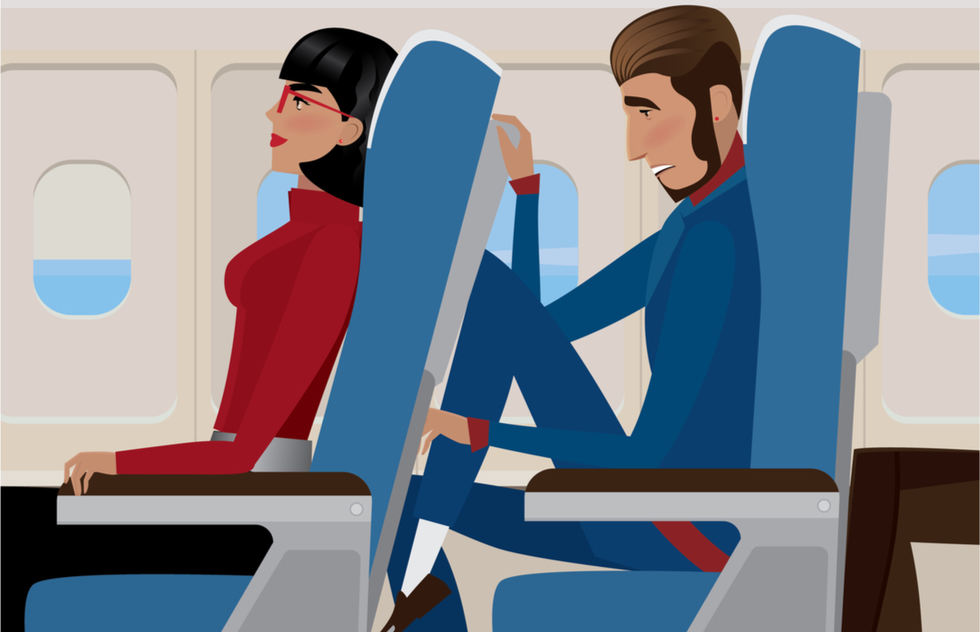 Once again, Americans are going after each other.

And once again, the infighting is misplaced. Today's battle, like so many other battles these days, confuses the real source of the friction: We're being squeezed for cash from above.

You might have heard this week about the video circulating on social media in which an airline passenger fights back against a reclining seat by raining blows against it. Childish? Totally. Surprising? Absolutely not.

Most of the discussion has centered on the question of whether it's impolite to recline your seat on a flight. The real problem, though, is what got us here.

Even though most of us wouldn't hit a breaking point like that guy did, all of us know how he felt. In-flight tantrums are usually an indication that a passenger has reached a breaking point, and we all get there in stages from the moment we buy a ticket.

The airlines, not passengers, are the culprits. They’re squeezing the cabins. They push our limits and then pretend to be outraged when we snap.

The industry has done everything it can to turn airline cabins into emotional powder kegs. You probably couldn't devise a more successfully insidious plan if you tried. Extra fees, inadequate terminals, Soviet-style customer service, lousy communication, miserly in-flight refreshments, excruciatingly tiny spaces... The cumulative effect is that we are becoming too frustrated and agitated to negotiate the challenges forced upon us. It's like poking a dog with a stick and then blaming the dog for biting back.

And flight attendants, who are sent into the firing line of the frustrations, are showing the limits of their own tolerance for the tension.

In airplane speak, the amount of room you get before your knees knock into the seat in front of you is called the pitch, and you may not be old enough to know that passengers used to get enough of it.

On the Boeing 707, which began service in 1958 and led the way for the Jet Age, the average seat had a pitch of 34 inches. That's nearly three feet. In some cases, passengers were even given a full three feet, which was enough to maneuver without disrupting other people.

But now, no American airline gives economy passengers that much space. Some, such as Spirit or Frontier. have a pitch as little as 28 inches. American Airlines has as little as 30 inches. That's a loss of a full half a foot—or about as far as most coach seats recline. The airlines stole the buffer zone.

The airlines have put us in the situation. Why are we blaming each other?

Even the supposed consumer advocacy voices are falling into the trap of blaming customers for their own mistreatment. The satirical social media account Passenger Shaming, which mocks bad customer behavior, routinely sneers at "gate lice," a name for the cluster of passengers that appears near the gate before boarding is called. But as we all know, the airlines and airports make lining up for boarding impossibly confusing thanks to inaudible announcments, a ridiculous number of passenger classes, and nonexistent signage or space for lining up. "Gate lice" are the natural result of crowd mismanagement, and not necessarily proof of the decline of manners.

Some travel etiquette pundits will tell you that good people don't recline. "Reclining your airline seat is unacceptable because we're officially out of space," wrote columnist Christopher Eliott. "It's rude—and it's wrong."

There's simply no space to recline, argues Elliott, therefore we shouldn't do it.

No. There's no space to recline, but the airlines did that to us. We didn't do it to each other. It's a tough sell to claim passengers shouldn't be able to press the little recline button that the airlines install at every seat. It's more sensible to ask why the airlines arrange seats in a way that they know makes reclining impossible.

How that button is used—without warning, without consideration—makes the problem worse. Passengers are indeed being rude and selfish when they ram seats back without checking behind them, and we have to be more thoughtful with each other to mitigate that, but the airlines have boxed us in. Whether a passenger reclines or is made not to recline, someone will lose.

As with so many things today, Americans must stop fighting and recognize that someone is actually setting us against each other. Our fight isn't with each other. Not really.

Place blame where it belongs. Be furious with the airlines, and mobilize to get our space back.