What is a Transatlantic Crossing on the Queen Mary 2 Like? Our Readers' Questions Answered

Last week, I took what many consider the voyage of a lifetime: a transatlantic crossing on an ocean liner. There's only one ship left on the seas that was specifically designed to slice through ocean waves the way a French waiter slices through foie gras, and that's Cunard's Queen Mary 2.

She's no longer the largest ship in the world (it's currently eighth), but she's plenty big, and she's the only one hardy enough to challenge the North Atlantic on regular crossings between Southampton, England, and New York City. The occasion of my trip was the 200th crossing for ship, which began sailing in the spring of 2004.

Before I left, I asked Frommer's readers to post the questions they had about the trip.

Mango asked: "I've read there are different classes onboard the ship, with different main dining rooms? True? How does that affect interactions between people on board?"

Yes, Mango, you have that right. There are three basic classes, defined largely by the default restaurant where you eat your meals. Most travelers go via Britannia class, whose giant, three-level dining room is considered the standard fare. There are two timed seatings at 6:30pm and at 8:30pm. (Within that, there's a mini-class called Britainnia Club. They eat food from the same kitchen but in a discreet area, much like a private dining room, and they have no set dining time. They eat when they want, within serving hours.)

The two upper-class categories are Princess Grill and, at the top of the food chain, Queens Grill. Those are much smaller. They also share a kitchen, but given the much smaller workload, the food there, and certainly the service, is noticeably better. I was able to try a dinner there and it was unquestinably my best meal on the ship, so the class divide matters. Not that Britannia's is bad -- although it's ship food, not true gourmet -- but there's a clear quality distinction between feeding the masses and feeding the exclusive few. I believe that Carnival, which has owned Cunard for a while, has taken some of the luxe out of the standard product.

That's what happens when you take something that's historically over-the-top fancy (a class-divided ocean crossing) and cross-breed it with a megaship and market to the masses; you are left with the impression of luxury but in point of fact, the standard offering in Britannia is often on a par with other lines.

But there are other dining options. The King's Court is the cafeteria-style buffet area, and frankly, the food is blah and the layout is confusing. Each night, a portion of the King's Court becomes, strangely, a mini-restaurant where you pay $10 extra to eat. Depending on the night, that's either a pan-Asian restaurant, an Italian one, or my favorite, the Indian-themed Coriander. (This was my favorite, possibly because so many South Asians are working in the galleys.) Then there's Todd English, the most upscale optional restauarant, where dishes are charged at mid-level restaurant prices, around upper teens for mains. That restaurant was much better in the ship's first years than it is now. Beyond that, there are a few scattered counters with odd hours, such as the lunchtime fish and chips in the Golden Lion pub.

Interactions don't seem to suffer. The people from the top classes can mingle with the other decks anytime they want, and they do; their allegedly private swimming area was pretty much deserted on the trip because they'd rather be exploring the ship with everyone else. They also like to try the other restaurants. You'd never know who was in which class by looking around the ship.

KaraJane asked: "It sounds like a wonderful way to get to Europe, though I wonder if all the time on the ship (with no shore stops) gets wearying."

It is a wonderful way, I must say. There's nothing like taking a New York City yellow cab to the dock, and the next time you touch land, you're driving away on the left side of the road. It's even better going west, becuase you can load up with as much baggage as you want without fees, which means you can go on a grand shopping tour of Europe and not pay the airlines a cent in luggage penalties. Plus, going west, you get 25 hours in every day since you keep going into new time zones; going east, toward England, you only get 23 hours a day since the clocks leap forward daily at noon.

I confess that I thought I would be far more rested when I arrived. I stayed up late saying goodbye to everyone I had met on my week aboard and then I woke up at 5am to see the ship glide past the Isle of Wight and into Southampton Water. I was more tired than any case of jet lag has done to me. But that was my fault.

Also, on arrival, Cunard managed to do something an airline has never done to me. It toally destroyed my luggage, mysteriously ripping a chunk of it off by extreme force, and by some miracle of Murphy's Law, it accomplished it in the 200 feet between my stateroom door and the dock. (It also deferred responsibility to my own insurance, so be warned.)

Honestly, none of the people I talked to were bored. There are so many activities planned each day (lecturers, planetarium shows, movies, a dazzling behind-the-scenes tour), and as cpw123 points out, everyone is so sociable, that we all got into a happy routine. Mine involved attending the 10am and 11am lectures (given by several speakers, including, on my run, the naval architect who designed the ship) and, ahem, sipping a lot of gin and tonics. There were also three nights during which the dress requirement was formal, which meant a tuxedo for me. With clip-on bow ties; there was no class on how to tie a real one.

SoarBooks asked: "How does one get news?"

Stateroom TVs have CNN, MSNBC, Fox News, BBC News, and Sky News. Plus there's a daily roundup of the major headlines dropped along with the daily schedule of events. There's also an Internet café and shipwide Wi-Fi—although it's not blisteringly fast (you can't stream video), it is blisteringly expensive at 75¢ a minute. Everyone tends to compose their emails offline, then dart online to upload and download and shut it off again.

Interestingly, as we were preparing to leave port, those terrifying images of the Asiana crash in San Francisco started appearing on our cabin TVs. Normally, seeing something like that as you prepare to depart on an international trip would be enough to freak you out, but I suddenly never felt safer.

Travel Rob wants to know: "I'm just curious about the passengers. Are they mainly seniors that have been on the Queen Mary 2 before, or is there a mix of all ages and newcomers to the QM2?"

Rob, the clientele leans toward travelers who have earned their stations in life. They tend to be educated, subdued, genial, and not as demanding as many American tourists. Some had been on before —there was even a "reunion" for people who had been on the first Queen Mary, which was decomissioned in 1967, and that's an event that happens on every crossing—but nearly all of them care about the great heritage of the ocean liner. I also think travel heritage is important. They also feel at home with the kinds of amenities Cunard offers (talks, a giant library, nightly dancing to live music, performances by students from Juilliand and the Royal Acadamy of Dramatic Art), aren't much for glitz, and are often British.

There are plenty of middle-aged and younger people, too, and even a few kids who appeared to be conditioned to amusing themselves with a civiliized crowd. I think there are some teenagers walking around England right now that never want to see another ping-pong table again. The disco is usually blaring away more out of optimism than necessity, and there were no limbo contests; I don't think the ship's medic could handle the aftermath.

No one asked the question I thought that was going to be first: Do you get seasick? We didn't. The Atlantic was a pussycat with us, and it often looked like we were crossing a lake. In fact, the commodore told us on Day Six that it was the smoothest crossing the ship had enjoyed in her entire transatlantic career. I have taken it once before, in March, and she hacked her way through some waves for a few hours on that one, but she's big, her prow is intentionally pronounced, and she has four stabliziers that flip out like airplane wings and counteract most rough seas. Cruise ships roll because they're sort of like floating boxes. Ocean liners are designed to cut through nastiness.

And a question you may not have thought of: Do they mention the Titanic? Repeatedly. In speeches, in books on sale in the bookstore, on the navigational chart of our route posted on Deck 12, and you can even choose to take your picture in front of a backdrop of that ship's staircase on formal night.

But Carnival and Cunard will be the first to tell you that they owe the existence of the QM2 to James Cameron's movie. It revived interest in ocean liners at a time when interest was dead. The Queen Mary 2 was Carnival 's answer to making a mass-market version of that classic voyage. In large part, the cross-pollination works.

And for every other instance, all you have to do is look out at the sea and remember that you're a part of a long, long history of travel. 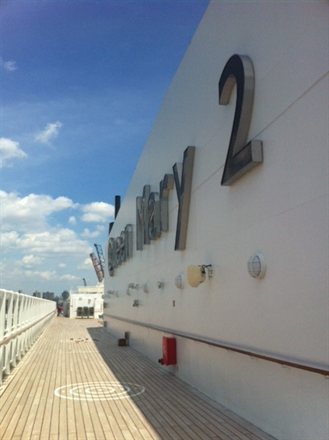