What’s the Best Vacation For Your “Stage of Life”? How Age Can—and Should—Affect Your Travel Plans

“Man is by nature a social animal”, wrote Aristotle. And though he wasn’t commenting on vacations, his observation certainly applies:  who one travels with can be as important to the success of a trip as where one goes.

Certain types of travel, as well as certain destinations, attract wildly different demographics, after all. Head to spring break-central, Panama City, Florida in March or April and you’ll feel like an old fogey if you’ve reached the ripe age of 26. Conversely, you’re more likely to enjoy a show at the Lawrence Welk Theater in Branson, Missouri (and Branson itself for that matter), if you know who the heck Welk was. Though it may sound boorish to say it out loud, there’s an ease that comes from socializing with others of one’s generation, a comfort that can make holidays more of, well, a holiday.

Match your age to the following vacation options:

Cruises: All ages cruise. But they’re not taking the same boats or itineraries. “The ones that cost more get older passengers,” notes Pat Webb, owner of the travel agency CruiseStar.com. “My usual Seabourn, Regent Seven Seas and Silverseas client is 72 years old. Holland America also gets a lot of retirees.”

River cruises also tend to skew older. “They’re longer, they’re more expensive than regular cruises and they don’t have the Vegas-esque atmosphere that attracts younger cruises, “explains Sherry Laskin, author of the blog CruiseMaven.com. “I’d say the average age on most river cruises is at least 63.”

So where and when are the younger folks cruising? On affordable, shorter itineraries, often to the Caribbean and the Bahamas; and on those that fall during school breaks. 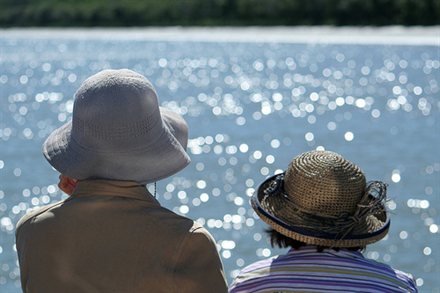 Guided Tours:  Baby boomers make up some 60% of all the participants on these types of trips, according to the United States Tour Operators Association. But that 48 to 66 demographic won’t be the norm on all tours. Grand Circle Travel and the company Road Scholar (formerly Elderhostel) program their offerings to appeal to the needs and interests of senior citizens; Contiki Tours is only for those under the age of 35 (and seems to be most popular among people in their early 20’s); and specialized family tours, offered by such companies as Tauck, Globus and Disney Tours, attract young couples with kids.

All-Inclusive Resorts: Though there are exceptions, those who are old enough to have grandchildren don’t flock to all-inclusive resorts, according to Richard Vanderlubbe, President of TripCentral.ca. “Adult-only and couples oriented resorts--like Sandals, the Couple Resorts, Excellence and Paridisus—they get the honeymooners. So you’ll see a lot of 20-and 30-somethings, but also a lot of second marriages, folks in their 40’s and 50’s.” Those all-inclusives with kids clubs, not surprisingly, attract families with young children and teens, according to Webb. “If you’re looking at students who are trying to get away, they choose lower-priced all-inclusive, those with lots of nightlife--your Cancuns, Punta Canas, Los Cabos--the more value oriented destinations,” says Vanderlubbe.

Hostels: Backpackers come in all ages nowadays, says Michael Cavanaugh, the Hostel Accommodations Coordinator for the Hosteling International Canada. “We have one lifetime member who’s 103!” he laughs. But older travelers don’t make up the majority. “We took an informal survey recently, and found that 27 was the most usual age for our guests,” says Cavanagh.

“New Media” Accommodations: Thanks to the internet, more and more travelers are bunking in private homes, either for free through such sites as GlobalFreeloaders.org or CouchSurfing.com; or for a reasonable fee, as when one rents a room through AirBnB.com. New adaptors to these types of travel opportunities are the tech savvy generation. “I can tell you that the average age of an AirBnB user is in the late 30’s,” says Vivek Wagle, head of marketing for that company. “We have slightly more women using the site than men,” she adds.

The Caribbean: Though it would be difficult to predict what age vacationers are most likely to travel around North America, Europe or Asia, the small and distinct islands of the Caribbean are easier to categorize. “The destinations that are quieter and pricier--Grenada, Barbados, Antigua, the English Caribbean--these are very popular with folks in their upper 40’s through 65 or so,” says Vanderlubbe. Younger folks? They’re going for the deals of the Caribbean coast of Mexico, the Dominican Republic and Jamaica.