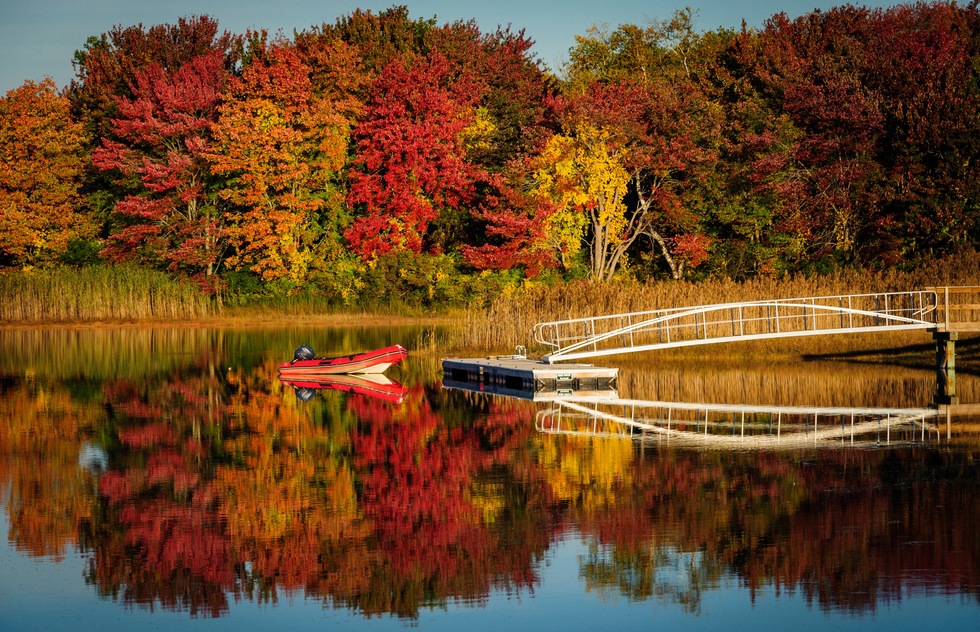 What Will Fall Foliage Be Like in 2022? Predictions from an Expert

We've got encouraging news for leaf peepers—and it comes from a real expert.

Aimee Tucker, the digital editor of Yankee magazine and NewEngland.com, told me on this week's edition of the Frommer's Travel Show podcast that the publication's chief meteorologist and tree expert, Jim Salge, has been using the word "spectacular" to describe what the fall foliage will be like in most of New England this fall.

While there have been drought conditions in much of the region, the overall situation could result in a season of vibrant foliage. Barring any weird weather between now and late September—"We know that Mother Nature still has a few weeks to throw some storms at us," as Tucker pointed out—road trippers should find more than enough beauty to fill their Instagram feeds.

"The nice part is that it's the parts [of New England] that people like to go to the most for foliage and leaf peeping, those parts are doing great," Tucker added, citing recent rains in Concord, New Hampshire, and Burlington, Vermont.

So which parts of New England might not be up to snuff in the coming months? The areas hit the hardest by drought, including Rhode Island and Greater Boston. The lack of moisture there could result in leaves that are duller in color or that change later in the season than usual.

But there's a silver lining for out-of-towners. Because residents of New England's major population centers may not get great colors, those folks may be less inspired to hit the road for leaf-peeping jaunts. Yankee magazine calls that "backyard syndrome."

With Bostonians and Rhode Islanders out of the picture, that could mean more room at inns and less traffic on the roads for the rest of us.

Yankee's forecaster certainly thinks backing out of an autumn foliage tour would be a mistake. "Given the drought-stressed trees and browning lawns in New England’s population centers, we’re worried that people may not be willing to travel to see what should be a great show this year," Salge said in a press release. "Therefore, our advice: Don’t cancel your foliage travel plans, be willing to explore, and hope for rain!"

With regard to timing, Tucker told me that peak colors for New England are expected to come around Columbus Day weekend, with the leaves starting to turn in late September at higher elevations and in Maine (an autumn shot of Kennebunkport is above for inspiration).

All that being said, the amount of time the leaves stay on the trees once turned could be briefer than in years past. Even parts of New England that aren't officially in a drought have had far less rain than normal this summer.

The quality and length of autumn displays will depend quite a bit on the weather in the coming weeks. Salge told the Boston Globe, "If we stay warm, the drought will have a much larger impact. If we get a couple of cold snaps, that brief, bright foliage situation will kick-start ... We could get rain that lessens the effect of the drought or tropical systems that send salt spray to shore and really desiccate the leaves.”

NewEngland.com also has predictions for fall foliage in other parts of the United States.

A "strong" season is expected in the Mid-Atlantic region, particularly in the Adirondack and Catskill mountains as well as in the higher elevations of Pennsylvania and New Jersey.

The site's forecast for the Southeast calls for a "bright show," though higher than normal summer temperatures could delay when the leaves turn. Conversely, conditions in the Upper Midwest may mean that leaves turn earlier.

The Pacific Northwest should have a "normal" season, but, sadly, much of the rest of the West has been too hot and dry this summer to have anything but a very brief, very early leaf-peeping window.

To see all of the expert predictions along with updates as the season progresses, visit NewEngland.com's foliage page.