While You Were Out, Your Hotel Covered Your Bathroom Mirror with an Advertisement: Okay or Not?

Tonight, Instagram user @ZachHonig tweeted this image of his hotel room at the Westin Bonaventure Hotel & Suites in downtown Los Angeles. It seems that while he was out, the management let themselves inside and did this: 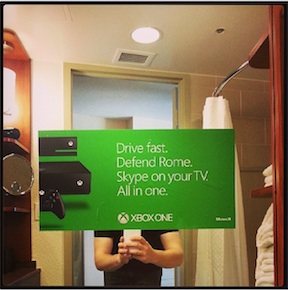 Yes, that's an ad. And yes, it's stuck directly to the mirror in the most private area of this private room: the bathroom.

L.A. is currently hosting E3, the Electronic Entertainment Expo, a huge trade conference in which all the major gaming systems jockey for attention. Apparently Microsoft's XBox thought it would pay Starwood Hotels' Westin to make sure its ads couldn't possibly be missed by its guests — and Westin agreed to sell mirror space to advertisers.

Is this a frontier too far for a hotel chain? I'd say yes. Perhaps the hotels have forgotten that we already pay them for rooms. This week standard rooms at the Westin Bonaventure are going for $350.

There's something unsettling about knowing that someone has entered your hotel room while you were away not to service your room as you pay them to do, but with the intention of selling you something. It could be interpreted as an invasion of the privacy one pays for.

If hotels are going to sell our personal hotel room space to pitchmen, there's no longer any sanctuary or pretense of luxury at their properties. Why not schedule wake-up calls to jolt us away with pitches for Eggo waffles, interrupt our favorite TV shows with in-house ads for Direct TV, or weave display ads for Tide detergent into the bedsheets?

What do you think?