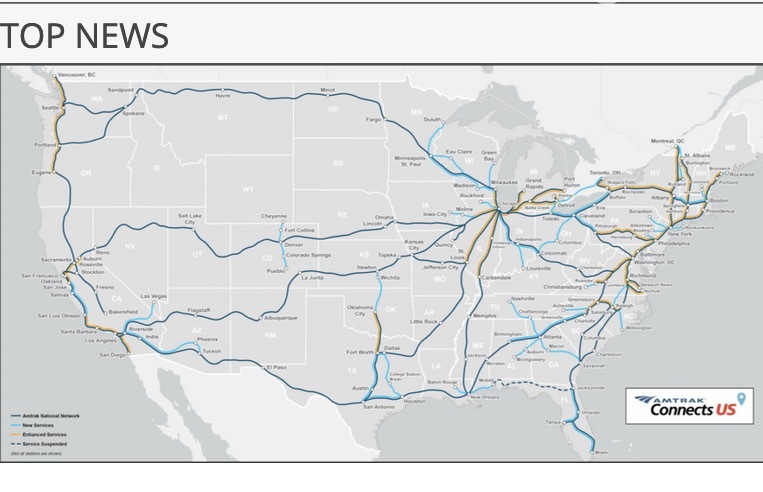 Apologies to South Dakota and its 884,659 residents. It is the only one of the contiguous states to be left out of Amtrak’s ambitious plans to improve rail service by 2035.

But for the rest of the country’s 328.2 million residents, Amtrak’s proposal could be life-changing—if enough lawmakers sign on, that is.

By which I mean if enough of them sign on to President Biden’s just-proposed infrastructure bill, which allocates $80 billion for rail.

In response to the bill's announcement, Amtrak’s CEO Bill Flynn waxed poetic in a press release about what could be accomplished with the boost: "Amtrak has a bold vision to bring energy-efficient, world-class intercity rail service to up to 160 new communities across the nation, as we also invest in our fleet and stations across the U.S. With this federal investment, Amtrak will create jobs and improve equity across cities, regions, and the entire country—and we are ready to deliver. America needs a rail network that offers frequent, reliable, sustainable and equitable train service. Now is our time, let’s make rail the solution."

But what does his statement mean in practical terms?

Well, under Amtrak’s newly released plan, major cities like Nashville, Las Vegas, Phoenix, and Columbus will get service. None are currently accessible by passenger train, which is shocking when you think about it.

Houston, Atlanta, Cincinnati, and other cities that do have service would see major improvements. Far too many cities in the United States are served by just one train per day, often at unreasonable hours in the middle of the night. The new plan would change that, giving them more service at more convenient times.

In all, if the full plan is implemented, some 160 million more Americans could have access to rail.

The map above (click here to see a larger version) shows the routes we have now in dark blue, the expanded routes in lighter blue, and proposed new routes in yellow. State-by-state plans can be seen here.

As I said, it’s an ambitious plan—but it’s also a necessary one.

The United States has been drowning in car traffic, and we can only assume that once things get back to normal, that ugly part of daily life will return, too.

According to the transportation data site INRIX, in 2019, Americans lost an average of 99 hours per year to congestion. In Boston, one of our most jammed cities, a full six days a year was wasted sitting in traffic.

When I spoke to Jason Abrams, a spokesperson for Amtrak, he summed up the issue: "How many new highways can be built? How many lanes can be added? As traffic jams become longer and more frequent, Amtrak could be a real solution for millions of Americans."

Of course, the problem goes well beyond human inconvenience. The health of our planet is at stake.

Does our national rail line truly have the ability to expand in the ways it plans to?

Abrams notes that the United States has the largest rail network of any country on earth—but only when you take into account lines that are only used for freight.

Under Amtrak’s proposal, the passenger service is asking for "a streamlined and expeditious process for accessing freight rail lines and determining reasonable capacity improvements."

According to Amtrak, it has the legal right to use freight lines now. It just needs the political will and the capital to allow the expansion to happen.

I, for one, hope that Amtrak gets everything it needs so it can make these important infrastructure improvements a reality.

The alternative would be—and I say this without hyperbole—a disaster, both in terms of quality of life in this country, and in terms of climate change.