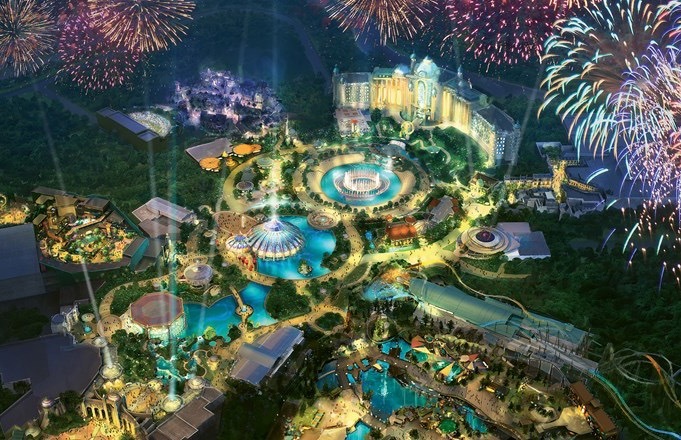 Why Universal Orlando's Just-Announced Theme Park Is a Game Changer

Universal's Epic Universe, officially confirmed Thursday morning, is being built on 750 acres about four miles south of UO's existing complex. An opening date has not been announced, but the land is clearly being prepared—a lone palm tree stands in the spot that Attractions magazine believes marks the center of the new park.

The last time Universal built an entire park from scratch (Islands of Adventure, which opened 20 years ago), it took about two years from start to finish.

What's this redundantly named park all about? Here's how it's being described by the CEO: "the most immersive and innovative theme park we have ever created."

And by a statement: "Universal’s Epic Universe will take guests on a journey where beloved stories expand into vibrant lands—and where that journey is as much a part of their adventure as the ultimate destination."

Clear as mud, right? Whatevs—the master marketers of Themeparkland never tell you everything at once. They release information in drips and puddles, to keep customers glistening with anticipation. There's much we still don't know about Epic Universe, but no matter what entertainment innovations it brings, we already know one thing: If it succeeds, it will transform how we visit Orlando, one of the United States' most important destinations.

1. The new park opens a whole new neighborhood to development.
The new park won't go where Universal's first two theme parks are. That parcel of land is too full now. Instead, it breaks ground on a parcel of land that has remained astonishingly undeveloped for something so central to the city's amusements. It marks the debut of a second Universal Orlando campus, which you might call Universal Two or Universal South. In fact, if Universal had owned this area in 1990, when it first put down stakes in Florida, it would probably have put the Studios here instead. This new tract of land is closer to SeaWorld, closer to the Disney resort area, and closer to the main freeway from the airport, 528. And it's also close to one other place that should translate into a major attendance boon.

2. The new park will soak up convention-goers.
Orlando's convention market is one of the most robust in the world, with some 200 major annual events bringing in more than 1.2 million visitors a year. But when attendees at the Orange County Convention Center want to go to Disney's Magic Kingdom, it chews up a major chunk of their time. Getting to that parking lot from the Convention Center takes 20–30 minutes, and getting into the front gates after that can take another 45 minutes. But Universal's new theme park will literally be across Universal Boulevard from the convention center. Visitors can pop back and forth in minutes, even on foot. If you don't think that's a big deal, you haven't seen all the schlocky restaurants and attractions by the Center that are packed nightly simply because they're easy to reach from the show floor. 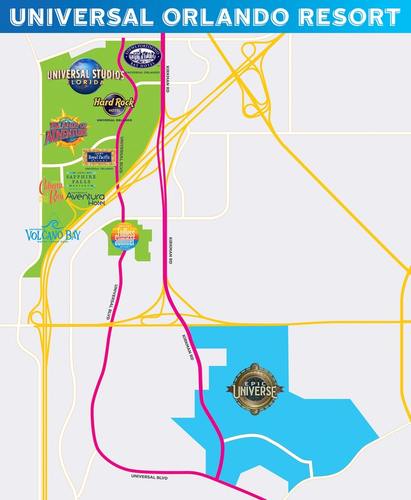 3. The new development is the first modern theme park themed to modern kids' nostalgia.
Disney is a classic, but that's just it—it's classic because it's old. Walt Disney World's core attractions may be based on the great hand-drawn animated films, but the company hasn't put one of those out for a decade, 2009's The Princess and the Frog. One of the most popular roller coasters is based on Snow White and the Seven Dwarfs, a movie that came out in 1937. Today's kids just don't feel the same as their parents about Disney's heyday of storytelling, and even the much-ballyhooed "Star Wars Land" at Disney's Hollywood Studios is just a park section, not a whole day's worth of fun. But we know that Universal is actively planning attractions based on Nintendo games, and the Fantastic Beasts and How to Train Your Dragon series are also on the table. Those are names that speak a younger language.

4. The new park is supported by affordable hotels.
The announcement said new hotels and a new entertainment district would come as part of the new package. But change is already here. In June, a little over a month ahead of this announcement, Universal cut the ribbon on the first phase of a terrific new budget hotel, the Endless Summer Resort. That property, situated on touristy International Drive in between the two existing theme parks and the upcoming one, marked the first time Universal ventured off its original campus. Now those cheap rooms will serve as a sort of bridge between the two halves of Universal. It also broke a major price barrier for Orlando—pointedly, Universal began charging $1 less for a six-person suite than what Disney charges for its cheapest four-person standard hotel room, and all drinks and meals were priced under $10. The message was clear: Universal has marked its territory as the affordable alternative to Disney's ever-ballooning rates. Guests may shuttle back and forth between the competing resort complexes, of course, but with Endless Summer, there is now a cogent reason for families to stretch their dollars by avoiding hotels on the Mouse's turf.

5. The new park legitimately makes Universal a three- to four-day destination, as Walt Disney World is.
Disney World has four theme parks and two water slide parks. With this opening, Universal—which is already in the Top 10 most-visited theme parks alongside Disney—will have three theme parks and one water slide park. When Universal's second park, Islands of Adventure, opened in 1999, optimistic investors said it elevated Universal Orlando into a place that would require two or more days to see. Up to now, some guests were able to pack its two theme parks into a single day by skipping weaker attractions and using the front-of-the-line Express Pass. A third park will make a marathon like that impossible. You'll now need to budget three or four days to see everything Universal has to offer. The old question, "Should I do Disney or Universal?", will begin to fall away. Both are important now.

6. The base rate of employee pay will be $15.
This is out of the gate—and there will be 14,000 workers added (Universal Orlando already employs 25,000). Disney World only raised its base to $15 last year after much arm-wrestling with employees. And happy employees mean better service. There's no doubt about it—Comcast sees an opportunity and is sparing no expense. "Our new park represents the single-largest investment Comcast NBCUniversal has made in its theme park business and in Florida overall," said the CEO of Comcast, which owns Universal. So in addition to poaching Disney's park customers and hotel guests, Universal is also going after its staff.

This will only get more interesting as the themes, rides, and lands of Universal's Epic Universe are announced.
News
Theme Park