You Don’t Have to Leave North America To Have An Exotic Vacation: Meet Eeyou Istchee Baie James

Eeyou Istchee Baie James—that’s not the name of the latest hip-hop star or a phrase in Norwegian. It’s an area right in North America that few have discovered…but those who have, can’t stop raving about.

You see, Eeyou Istchee Baie James is a Canadian territory that’s the size of Germany, but with 0.04% the population. Boreal forest covers most of it, with its northern edges fading into the tundra of Nunavik, its eastern border the waters of Eastern James Bay (it stretches about 380 miles inland). Most time of the year, you’re more likely to see herds of caribou, flocks of wildfowl and bears (both black bears and polar bears) than you are humans—though two-legged animals do like to zip around here on snowmobiles in winter. At the region’s heart lies the largest lake in all of Quebec and a slew of rivers, all Meccas for anglers, thanks to the pristine waters and abundance of fish.

But the charms of the area aren’t just its flora and fauna. Folks interested in Native American culture come here, too, to stay among the Ndooheenou, the Cree tribes of Eastern St. James Bay. Here they can experience a way of life that still has its roots in the ways of the ancestors: For two months out of the year, the Crees close the area to tourists so that they can engage in the traditional goose hunt in May and the moose hunt (in September). At those times of year, enough animals are killed, and then preserved, to serve as staple food for the people for the rest of the year.

But beyond those times, the Cree are very welcoming of outsiders, and have even put together classes to share their artistic traditions and ways of life. Visitors participate in storytelling circles, and learn snowshoe making, canoeing, and all about the plants of the area and how they’re used in traditional medicines. Much of this happens at Ouje-Bougoumou, a planned First Nations community on the shores of Lake Opemiska created in 1992 by famed architect Douglas Cardinal, the man behind the Smithsonian’s National Museum of the American Indian in Washington, D.C. (The community won a “Best Designation” citation from Habitat II, a U.N. conference on sustainable urban living.) Outside of this community are dozens of homey lodges that service the needs of fishermen and hikers. 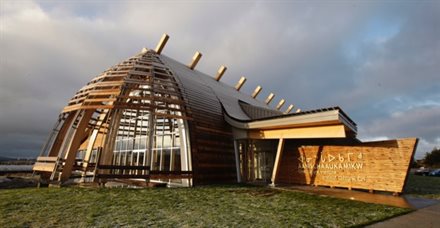 The Cultural Center at Ouje-Bougoumou

Visiting Eeyou Istchee is now far more easy than it once was, as the Cree elders have decided to create packages to encourage tourism. The first, a weekend getaway, includes a night in the community of Ouje-Bougoumou, then a night spent in a traditional Cree lakeside dwelling, set in a black spruce forest. Along with accommodations and all meals (including a traditional food tasting), guests are treated to many of the activities listed above, and all transfers. The cost is CAD$589 (approximately $405 USD), plus airfare from Montreal (it’s about a 90-minute flight; driving in is also possible from New England or the Toronto area). The offer is valid for travel Friday to Sunday from June 1 through August 31. Information on the package can be had by going to www.escapelikeneverbefore.com or calling 888/268-2682.

It’s an unusual and fascinating opportunity, I think, to visit one of North America’s most remote regions.